Now that we're stuffed ( result of partaking of too much food during the festive season), and have celebrated the out-going of the old and in-coming of the new year, we again sit back and ( try to) assemble some news, pictures and interesting events that have taken place since last Lix. However, it seems that our good friend, the Editor, is in his usual rush and once again I resolve that in the new year I will have every issue in on time. (No comments from the Editor please).

Again this year, our recreation center was overcrowded for our annual Christmas concert, which was held on December 20th. The opening address was given by Jack Williams, who then turned the program over to David Wyness, emcee. The young lads drawing the curtains were Burton Anderson and Donny Wyness. The program lasted about 21/2 hours, during which time those youngsters really performed. As the evening wore on, the excitement mounted and the tiny tots' eyes were on the door until at long last their ever lovin' Santa came with the biggest bag of toys and candy you ever saw. From the beginning of his entrance to the bottom of the bag, there was a mad scramble of kiddies running here and squeals from over there, and again this year St. Nick brought just what they wanted. After the excitement was over, the ladies served ice cream and cookies.

The directors of the program, Lilly Seal, Kay Lewis and Arlene Wyness and the choir director Susan Peters, wish to extend a hearty thank you to all children for a very good performance and fine co-operation. Special thanks to Bea Williams and employees' children from Elk Point for their fine performance in "The Party Line".

The recreation centre was also the scene of the Christmas and New Year's parties both of which lasted until the wee hours in the morning. The reason for this is simple. We all love dancing and the Windsor Club bought some new linoleum for the floor. Before, we used to get tired from trying to push ourselves around on the cement floor but now dancing is so easy and effortless on a smooth floor that it's quite logical that one would like to stay until quite early. (in the morning that is).

Again this year, Jack and Bea Williams held open house at their home in Elk Point the afternoon and evening of the Saturday before New Years.

One day not long before Christmas, the Manager and Staff received a huge present. The parcel being so big, everyone was excited and gathered around while George Krissa did the honors of opening it. Surprise? â indeed it was. Our parcel contained a bag of Dairy Cotton "Windsor Salt". Herb Wyness and Cal Cundliffe had hoped it would be something to eat, but after allâwhat do we like better than "Windsor Salt"?

Once again our coffee sessions have turned to "Who pulled a called shot" and "so and so's was a fluke 'cause he could never get a shot like that with the ice he gave" â Well that's curling and right now curling is in full swing â enthusiasm is at it's peak as usual. And as usual the best shots are still being pulled from behind the glass. The ladies are still making the best coffee and hamburgers in this part of the country. Coffee should be getting better now as the coffee bar is sporting a new 50 cup automatic coffee perculator, which of course is something they really needed.

The lady curlers are waiting for Dick Rowat to come out and give them some fine pointers on curling before they venture out to some bonspiels.

One thing about this part of the country, we never lack of something to grumble about â if we run out we always have our old faithful to fall back on â the roads which are still in their usual deplorable condition. If it isn't rough roads (putting it mildly) that don't get graded for months on end, then its icy conditions â and during this time, our good old council, being too busy with "other things" never seems to get around to putting sand or salt on the roads. However, Jack Williams had an inspiration and had Ron Seal and his crew make a salt spreader. â Not being mechanically inclined, I'm unable to give some of the finer details of this piece of equipment, but I do know that you hook it on behind the truck and it spreads salt. It holds approximately 170 lbs. and some lucky guy has to stand in the back of the truck and keep feeding this spreader salt. However, this thing is working very well, and when Dan Allen has to take a trip into Elk Point he just hooks on the salt spreader and does a small job that means a lot, that should be done by our good old municipality.

Looks like Hammy Oliver has gone into the car business â When asked about it, he says, "Oh No â the old Chevie is for driving back and forth to work and the 1957 Fairlane Ford is for Sunday driving."

The big game hunters of the year are George Krissa, ( George says his deer came up and asked for a bullet) Vernon Magnusson and Ken McGinnis. Bob Lorenson and some of his side kicks went on their annual hunt and filled their quotas, so from all reports hunting went over with a big bang again this year.

On November 20th and 21st we were favoured with a visit from John Nimmo and Bert Ayres.

We wish to extend sympathies to:â 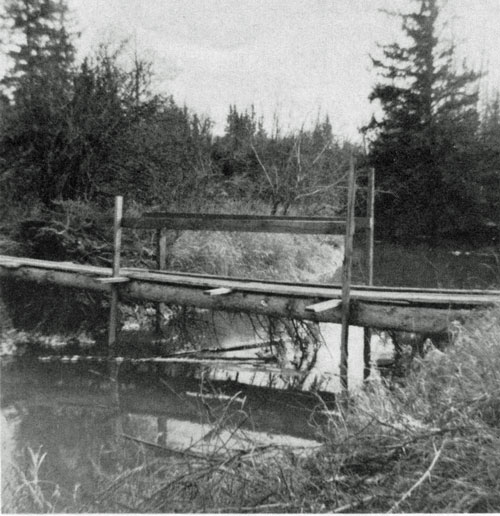 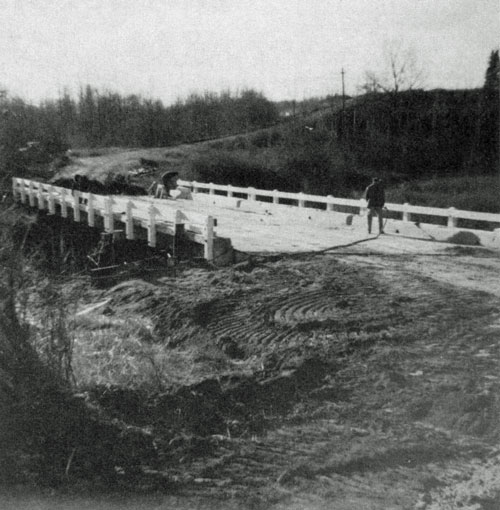 "The Old and the New" Last issue mentioned the construction of a new bridge between the plant and townsite. The picture on the right shows the completed job, and, yes, the picture on the left is the one we uster use. Take a close look at the "Old" and you'll see why we needed a new bridge so badly. What with everyone buying new cars, you know the long, low, wide jobs, it was getting most impossible to cross the old bridge.

ANOTHER ACCIDENT-FREE YEAR AT LINDBERGH

Another accident free year was completed on November 24th, when Lindbergh Works won the President's Prize. All of us are proud to have accomplished this objective and again we feel that the fellows in the plant and the girls in the Dairy Mill are chiefly responsible.

By the look of the manager's big smile while presenting safety awards, we can be assured that he is very appreciative of our accomplishment. Congratulations to all at Lindbergh Works for a job well done. Our next objective is The Board of Director's Prize and we are in hopes of another accident- free year. 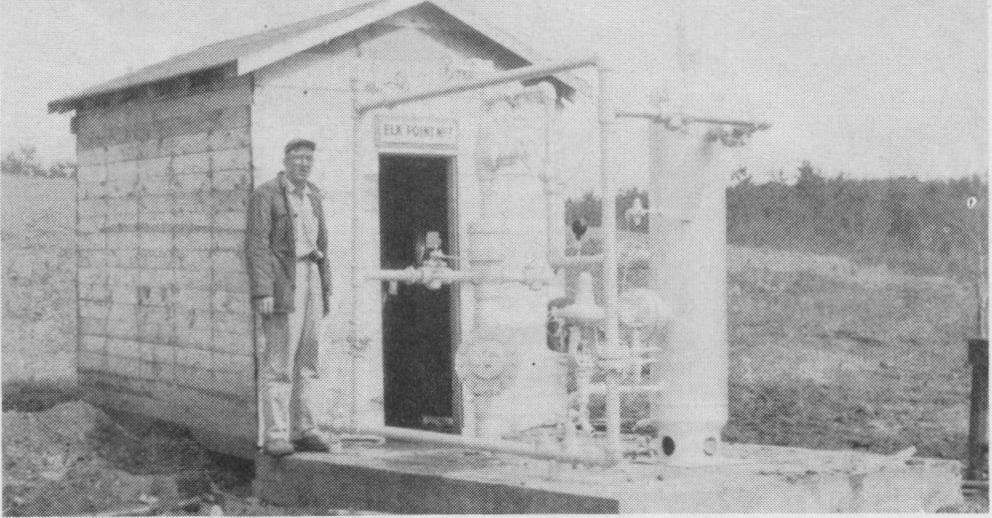 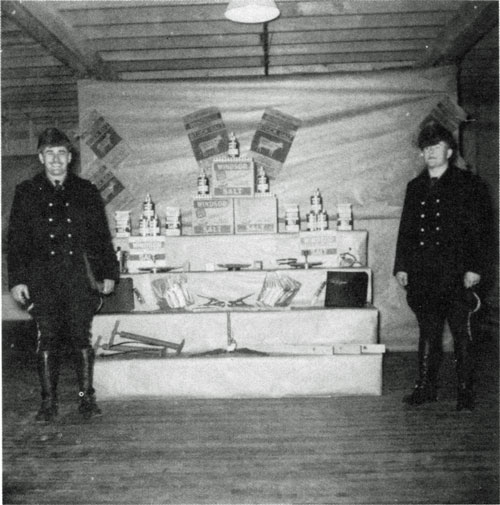 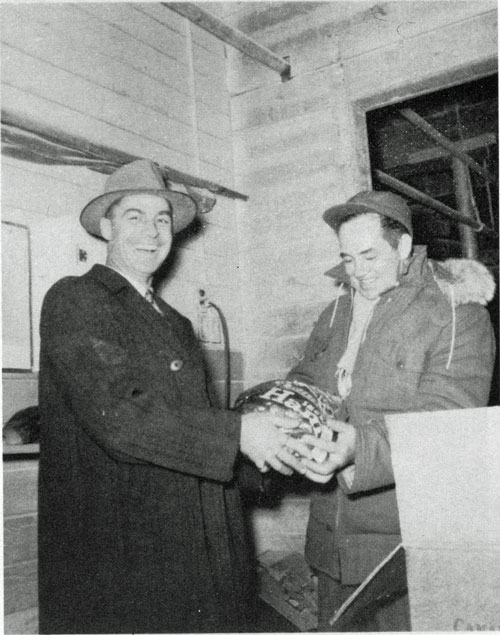 Looks like McLennan is trying to get away with the biggest ham. 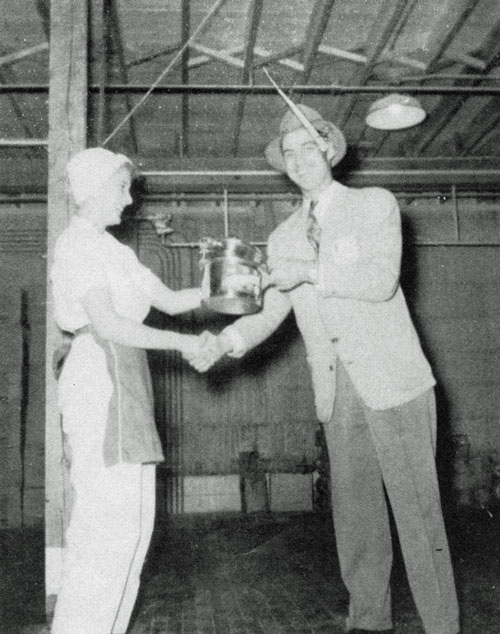 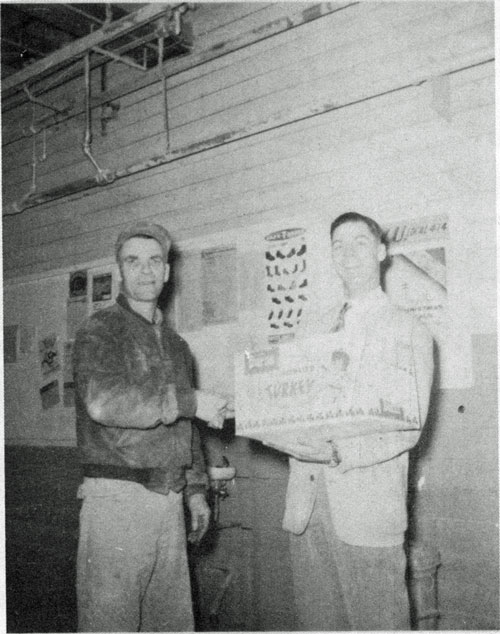 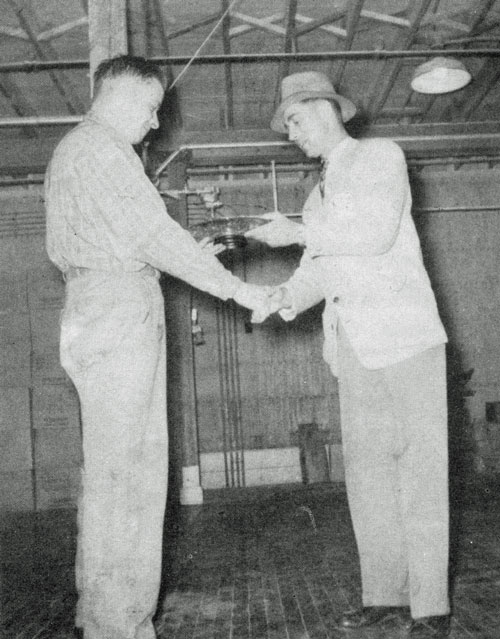 STARS A' SHINING IN SONG AND STORY AT LINDBERGH XMAS CELEBRATION

Hope you'll enjoy these pictures of Lindbergh's X-mas Pantomime. Sorry we have no captions for them, as the photos arrived without them. Those involved will undoubtedly recognize themselves. Looks like a good time was had by all, at any rate. 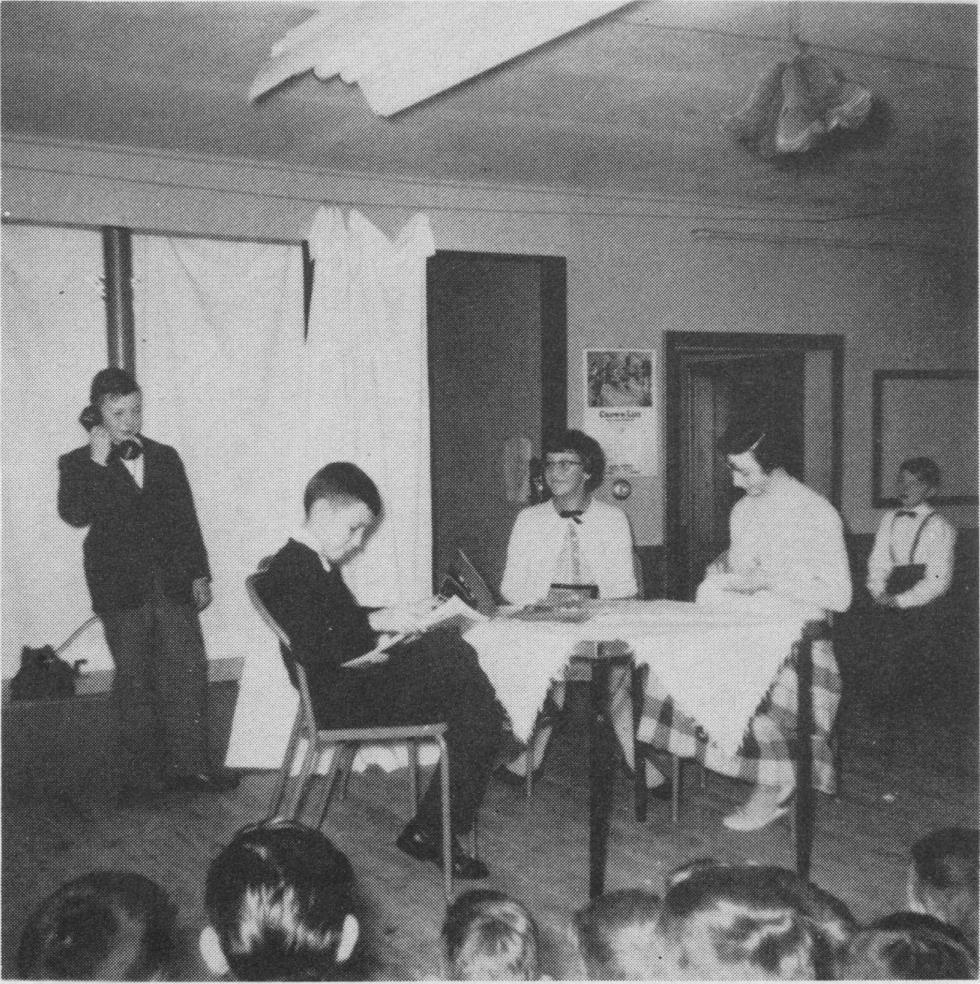 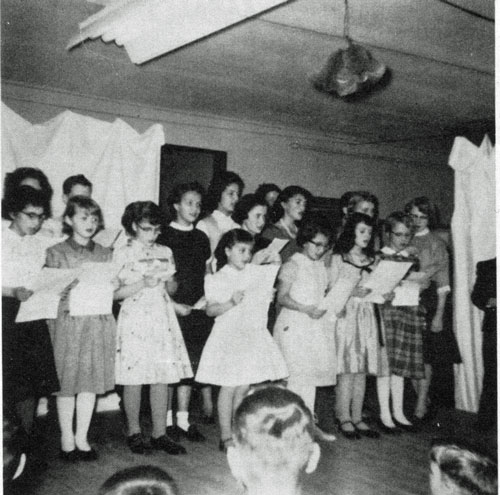 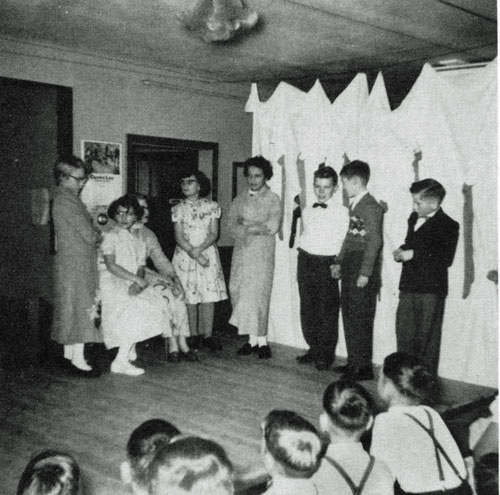 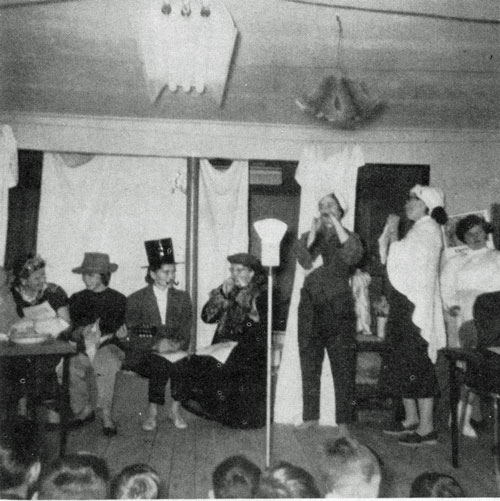 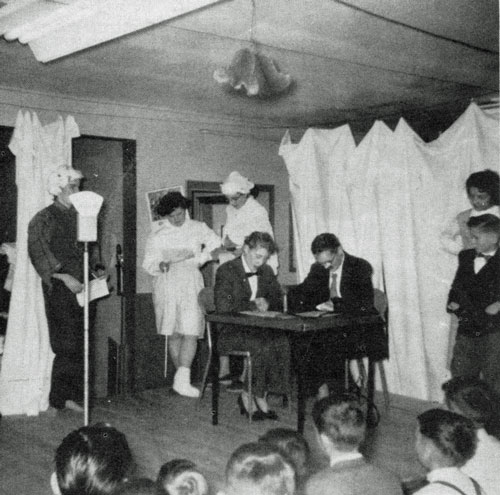 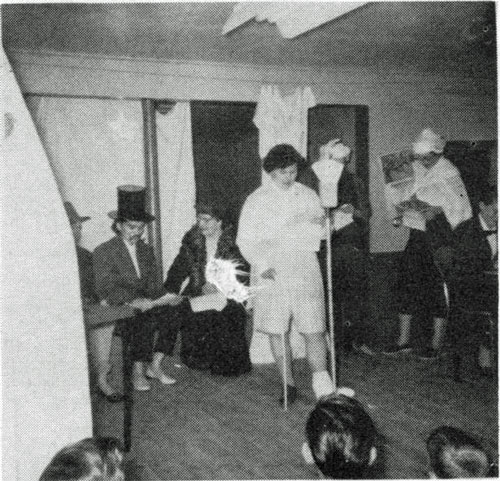 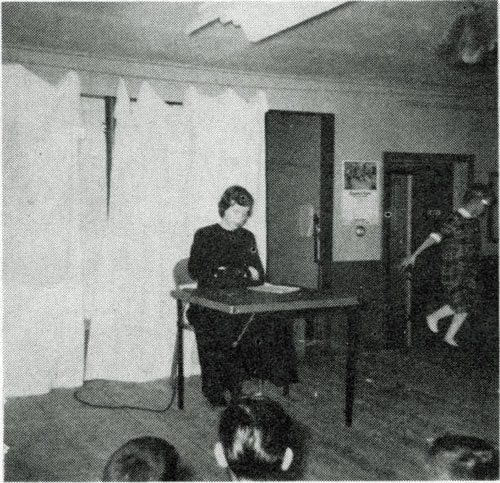