In the 1990s Pat Johnson heard that a bomb shelter was being removed from Elk Point. He tracked down the bomb shelter that CN Rail had installed in the 1960s at the height of the Cold War. A contractor from Glendon had dug up the bomb shelter and taken it with others to Glendon. Here is Pat's Photo of it along with some 1962 articles from the St Paul Journal. 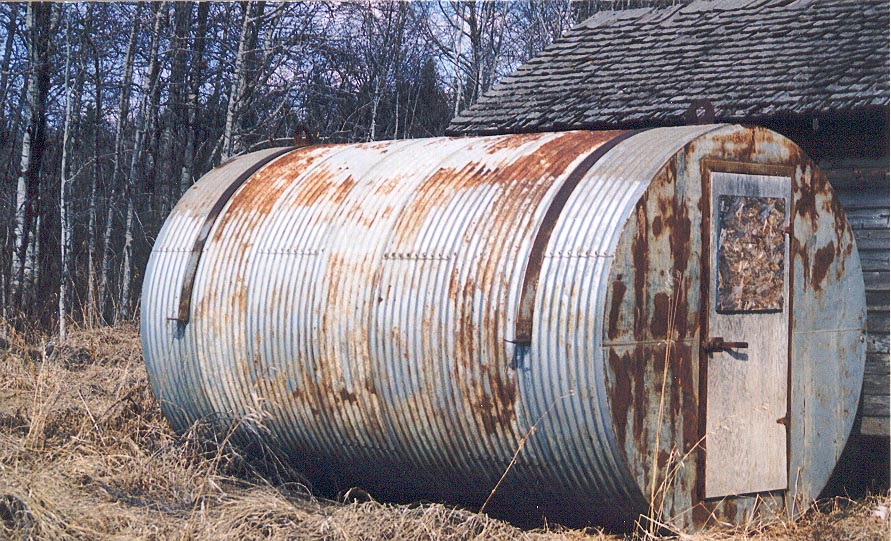 This is a brief diagram Pat drew to explain the shelter:

A five-megaton nuclear weapon explodes with a brilliant flash that lasts about a minute. A quick burst of nuclear and heat radiation emerges from ground zero, the point of the explosion. The spurt of nuclear radiation (wavy lines extending from the fireball) is called initial radiation or prompt radiation and klils within a mile or two. The heat rays (straight lines) can kill unprotected people up to 10 miles away and may start fires beyond that. The heat rays and initial radiation are followed by a blast wave which starts at more than 2000 miles an hour, but loses much of its damaging force by about 10 miles out. With the blast wave comes a violent Wind which picks up loose objects and bears them outward. In the illustration on a diagram, it is shown the a weapon has burst at ground level, leaving a crater about half a mile across and 200 feet deep. Nearly eve rything within a radius of a mile of ground zero would be destroyed.

As the brilliant fireball rises in the sky, it draws up a vast amount of earth that is melted or vaporized and contaminated by the radioactive residue of the explosion. A little later this material, condensing in the cold upper air like rain or snow, starts falling back to earth because, like ash from a fire, it is heavier than air. It is called fallout because it falls out of the sky, wherever the winds may blow it. You cannot tell from the ground whic4 way it will be carried because its scatter is determined , by high-altitude winds, which) may be blowing in a different direction from the lower-level winds you can observe. About five miles from the explosion, the heavier particles â early fallout â would reach the ground in half an hour. Twenty miles away, people may have nearly an hour to get ready. One hundred mi les away the fallout may not start for four to six hours. All this early fallout, which carries the bulk of the radiation danger, descends in less than 24 hours. The less dangerous lighter particles â delayed fallout â might stay aloft for months.

Experience in Europe in the World War II and other human experiences under disaster conditions have pointed to distinct advantages of the community or neighborhood fallout shelter when compared with the family shelter. There are several reasons why group- shelters are preferable in many circumstances:

1. A larger than family-size group probably would be better prepared to face a nuclear attack than a single family, particularly if some members should be away from home at the time of an attack.

2. There would be more opportunity to find first aid and other emergency skills in a group, and the risk of radiation exposure after an attack could be more widely shared.

3. Community shelters would provide shelter for persons away from their homes at the time of an attack.

4. Group shelters could serve as a focus for integrated community recovery activities in a post-attack period.

5. Group shelters could serve other community purposes, as well as offer protection from fallout following an attack.

For these reasons the Federal Government is undertaking a number of activities â involving guidance, technical assistance, and, money â to encourage the development of community fallout shelters, The over-all program, which got underway with the National Shelter Survey, aims at securing group fallout shelters in existing and new structures, stocking them with essential supplies, marking them, and making them available to the public in an emergency.

Many growing communities or neighborhoods are cramped for space in which small civic groups can hold their meetings. Gregarious teenagers often have no after-school hangout where they can relax with sodas and play the jukebox. This shelter can serve such purposes admirably. Requiring no surface space except for its entrances, the shelter c a n be built under a school playground or other civic property without interfering with present uses. The shelter, built of corrugated metal arches buried under several feet of earth, can vary in size. A steel surface door lead to a corridor-tunnel providing entry to all arches. Arches can be reinforced with metal ribs for extra blast protection.

After a nuclear attack, a tall apartment or office building 10 miles or more from the explosion could be one of the safest refuges. Because the gamma rays given off by fallout penetrate much like X-rays, the people taking shelter in the building have put as much mass of material as possible between themselves and the particles which have settled on the roof, ground, and other horizontal surfaces. Above ground, they have gone to the middle of the building; below ground, they have found shielding in a basement corner. Those in the main basement are shielded from radiation by the surrounding earth, by partitions, and by the whole mass of the building above. On the upper floors, people have shielded themselves in the "core" of the building. They have avoided the floor with the setback and terrace because of radiation from the fallout piling up there. (For better protection on any floor, it is advisable to keep below the windowsill level.) Because the tall building shields lower floors from some radiation, people have taken shelter in more rooms on that side. But no one has taken cover on the ground and top floors because the shielding there is inadequate.