(This same content is on the Elk Point History Site)

My father, Louis de Delley, was born and raised in Delley, Switzerland, one of eight children. After the passing of his parents, he went to Paris, where he trained as a butler. In that capacity, he did much travelling and came to New York in 1900. He came west to his two brothers and sister in Vermilion in 1906, but returned to New York, where he met Mima Williamson and married her in 1910.

My mother, Mima, was born in 1868 and raised in Kerwick, Shetland Islands. After her schooling she took dressmaking and millinery work, and later became a children's governess and nurse. She travelled with parents in Scotland, England and France for five years, then in the United States to Boston, Mass., New Jersey, and New York.

In the fall of 1910 Louis and Mima came to Vermilion by train, then by oxen to the homestead at Tyrol, which later became Mooswa and is now known as Lindbergh. 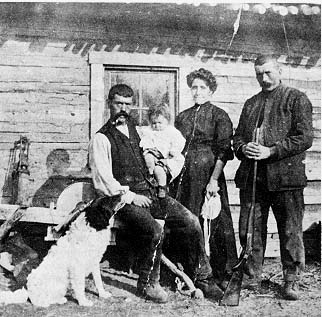 They lived in a leaky sod-roofed shack for four years, the first year with a dirt floor. About 1913 they built a log house with a shingle roof. About 1928 they built a cottage log house, which is still in use. I was the only child, born at home in 1911, with Dr. Matheson, a lady doctor from Onion Lake, in attendance.

My parents bought land near Dewberry in 1919 and rented the homestead. They moved back to Mooswa in 1922, selling the Dewberry land. In 1946 they sold the Mooswa land to Mr. and Mrs. 0. Dennison. They built a house on our land, in which my husband and I now live.

My father farmed with horses, raising wheat and oats, cattle and horses. Wheat was hauled to Vermilion in the early days, then Islay and Dewberry, or St. Paul when the ferry was not running, then later to Elk Point, and finally to the elevator in Lindbergh.

Our berry expeditions were to the Hatchard pines, Hooky Lake, north of Lake Whitney, for blueberries and low bush cranberries. Saskatoons and chokecherries were plentiful and there were some wild raspberries.

In the winter of 1924 my cousin, Charles Chardon, was working for my father for tobacco and board only. While they were cutting wood half a mile from home, a chip hit my father in the left eye. He was in severe pain. Dr. Ross was sent for that same evening, arriving about 9 p.m. The doctor was driving a young team; one line broke about half a mile from us, so the doctor tossed out his medicine box on the top of the hill, then jumped with his little black bag. When he came to the house he said, "My team is headed for Frog Lake." Charles got a saddle horse and went after them but they had turned in at E.T. Evans' gate and Mr. Evans had the team in the barn.

Dr. Ross left some medicine for Dad, but was called again about a week later. The doctor said he would have to go to the hospital. So we took a fast team and a sleigh and put in straw, blankets and a foot warmer. We returned home before midnight at 40 below zero. Everything in the house was frozen solid, including the water pail and the tea kettle. Dr. Ross and Dr. Miller removed the eye next morning. Dad was in the hospital for about ten days. The hospital was still in Dr. Miller's home.

My mother passed away in 1949, and my father in 1955. Both are buried in the Dewberry cemetery.

My earliest recollection of school days at Lake Whitney were about 1917 - 18. The first teacher was Miss Vina McKenzie of Heinsburg. Mother walked with me a few times at first. For a little while I went with Rolf and Archie Anderson, riding horseback with them. I had part of three years schooling in Dewberry, spring and fall, as it was too cold in winter.

After we moved back to Mooswa I rode a horse to school always. We had "Normal School" teachers for five months in summer. We had Mr. Roy Backer one term. He came back the next term and put us all back in the same grades again. Grades I to VIII were taught. Other teachers were Mr. McKeen, Miss Hattie Markstad, Mrs. Lodhunter and Mr. Gilson.

When Miss Markstad taught, we had a holiday to go to the unveiling of the Frog Lake monument on the massacre grounds. I can well remember Mr. Blaisdale Cameron giving his speech.

I went to Sacred Heart School in Edmonton for three months but had to come home to help with chores. I finished that term of four months with Mrs. Lodhunter. I attended school for only three months next term; there was too much work at home - stooking, milking, rock picking, cream to take to the station twice a week

I can remember eggs at 3 and 4 cents per dozen, cheese at 7 cents per pound; 22 shells for 18 and 25 cents for a box of fifty, leaf tobacco 7 to 1O cents per pound; bread lO cents per loaf; cream $2.35 for five gallons, special, test 48 to 50; turkey hens six pounds dressed 5O cents, toms dressed $2 and $2.50. I took half an eighteen-month-old steer to Dr. F. G. Miller towards payment on my appendix operationâ4 cents per pound for the front quarter and 5 cents for the hind. 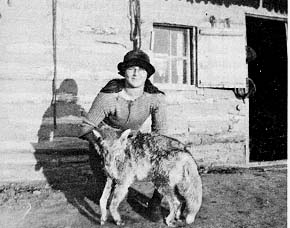 Therese de Delley with a coyote that she shot.

We owned a boat, which we kept in Lake Whitney for a few years, then moved it to Laurier Lake. I was very fond of hunting, trapping, horseback riding. I was on the Lindbergh softball team for two years.

Rev. Whaley married Harold B. Craige and myself in the Elk Point parsonage in 1933. We raised four children -- two boys and two girls. We farmed a half section in the Dewberry area, on which we retired thirteen years ago.

(February 4, 1999. This text is being edited in the parsonage mentioned above. The original history book has been scanned on a computer and needs work. Ron Onusko lived in and owned the parsonage located at 5125 - 48 Street and refered to it as the Old Manse)