John Lorenson (better known as Jack) was born in Rock Island, Illinois on Feb.22, 1881. He left home at an early age and came west, working on ranches and construction jobs in Wyoming, Nevada, California and Montana. In 1906 he came to Alberta and homesteaded in the Landonville district on N.W. 1/4 of Sec. 20-Twp.54-Rge.5-W4 Mer.

Mary Grauman was born in Minnesota on July 26, 1895, and came west with her family to Oregon, then on to Alberta where they finally settled at Raft Lake, just north of where Clandonald is now.

Jack and Mary were married in 1913 and for the next few years they were busy raising a family of one girl and three boys. They began raising sheep, cattle and of course a few horses for farm work.

Vermilion was their nearest town, and Dad had to drive the sheep and haul the grain there to market , which was about thirty miles. It took two or three days to drive a flock of lambs that far. In winter the grain was hauled by sleigh and four horses, and some of the homesteaders suffered severely with the cold. But not my Dad, as Mother had crocheted him a suit of underwear from homespun wool which was about a quarter of an inch thick and the other fellows wondered how he could sit up there on the load without getting cold while they had to walk to keep warm. When he got into the hotel though he had to get out of that suit or roast. He also had a pair of gauntlet mitts made of badger skins, which he later gave to Dr. Ross when he came to our place one time with nearly frozen hands. Mother also made all of our mittens, socks and sweaters from homespun wool, which was warmer than any you could buy.

In a few years though, the half section they had there was too small for the sheep and other stock, and as there wasn't any more suitable land to be had nearby, they decided to move up across the river to the Mooswa district in 1927. They acquired Sec. 35 and the west half of Sec. 36-56-5-W4, where there was more pasture and farm land to expand the sheep and cattle herds.

The railroad was only as far as Elk Point in the fall of 1927, and we had to drive the lambs there to market. I remember driving about two hundred or more lambs down the streets in Elk Point to get them to the stockyards and most of the town kids were out to help with the drive. We stayed overnight at Caskeys' Hotel and we had to get up early to load the lambs, as the train went back to Edmonton in the early morning.

The railroad was finished the rest of the way in 1928, when Mooswa became Lindbergh, and then we didn't have as far to go to market.

One time Dad was coming from the farm to Landonville in the late fall and got as far as the river, which was freezing up so the ferry wasn't operating. He left the Model "T" Ford on the south side and the ferryman, Henry Anderson, brought him across in the row-boat or on the cable. He walked up to the Mooswa store where Eddie Davis, (with a sly wink and grin), offered to loan him a pinto pony called 'Jitney', which threw him off a few times until he finally got him subdued. Some of the "locals" were enjoying the show, but unfortunately for Dad, he landed on a rock and was crippled up for a few days.

Another time Mother was coming home from town with the horses and a closed-in cutter that had a box behind for cargo. While she was closing the gate the team ran away and she managed to jump in the back, but couldn't get to the lines as they were tied up in the cab. She had a very exciting ride to the yard and then the horses went over the wood-pile, throwing her out in the wood, which was a close call for her.

Mr. C.J. Markstad was the Ford and International dealer in Elk Point at that time, and became a very good friend of Dad so all the machinery was purchased from photos Dad bought the first Model "A" Ford that Mr. Markstad had used as a demonstrator in 1928. It was a brown touring car with a white canvas top and was a real good car. It lasted us for many years; in fact all of us boys used it for courting our wives, so it has a special place in our memories. After we got another car in 1937, the old Model "A" was used as a truck for a few years and later was made into a buck-rake for haying and threshing. 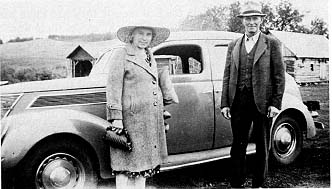 Our first tractor was a Fordson, also a demonstrator bought in about 1932 from "Marky". Some of the machinery from that era is still on the old farm and being used at times.

In the 'Thirties' we had a few dry years and times were tough for everyone, but we always managed to have enough to eat and had time to go to picnics and ball games etc. We had some real good ball-games against the Elk Point team, who were better equipped and even had uniforms!

Mother usually had a few of the local bachelors in for Christmas dinner and one of the regulars was Bob Chanler who was an ex-Mountie. He would keep us all agape relating his experiences as a Mounted Policeman and pioneer. I just wish I could remember half of the stories he told.

Mother wasn't well for a few years during the 'thirties' and Doctors Miller and Ross were called quite often. They were always there promptly when needed and I don't know what we'd have done without them. Once when I was quite young I had quinsy real bad and Dr. Miller Sr. came and lanced my tonsil, swabbed it with iodine, and in a day or two I was as good as new. We didn't have anti-biotics or sulfa drugs back then. Another time a horse fell with me and broke my wrist which Dr. Ross fixed up real well.

Dad was on the council of the Lincoln Municipality for about twelve years or so, along with Oscar Holthe, Ben French, Nels Litchfield, Leonard Coombs and others. Tom Johnson was the municipal secretary at that time and the office was at his home for years. Later the old school was moved to Lindbergh and used as an office where Sidney Holthe was secretary for a while. This was before the St. Paul Municipality was enlarged to include this area.

We went to the Moose Creek School No.2062, and one teacher I'll never forget was Miss Lewis, who later became Mrs. Eugene McDonell. She played baseball as well as any boy at school and could really pitch a mean curve. She taught our school for several terms and I'm sure everyone who went to school to her will agree she was one of the best. Her daughter Marie taught one of our boys later.

Dad was good at shearing sheep and he went to shear for other sheep ranchers as well. Some I recall were Mr. Frank Pinder and Mr. J. Casterton. He could shear well over a hundred sheep in a day and still turn a handspring or two. Later on the sheep weren't very profitable due to coyotes etc. so they were replaced with more cattle and hogs.

My sister Dorothy married Neal Edwards in 1936. They farmed in the area, and Neal ran the Moose ferry for a few years. In 1940 they went to the west coast where Neal worked in the shipyards during World War II as a welder. My oldest brother, Les, also became a welder and worked in the shipyards during the war. My second brother, Henry, stayed on the farm and helped the folks. I spent most of the war years in the army and served in Italy, France and Germany for about three and a half years. We lost some very good friends in the war, Fred Lawrence and Chester Davis among them.

Dad passed away in 1953 from a heart attack and Mother passed on in 1961. My sister, brothers and myself all have grown families of our own now and they all live in different parts of Canada and the U.S.

Les married Jean Dodds and lives in Edmonton, Henry married Florence Sweheim and they live in Penticton now, and Dorothy and Neal live in New Mexico, U.S.A. They all come back to the Elk Point area each summer to fish, camp and enjoy renewing old acquaintances. Rodah (nee Evans) and myself live at Riverview, near the Salt Plant where I worked until 1974 when I had to quit for health reasons.