(This content is also on the Elk Point History Site)

Nick Pelech born on May 12, 1901, of Ukrainian origin, came to Canada from Poland in the spring of 1928. He stopped in Vermilion and from there he came to the Northern Valley District with Peter Shymkiev to work for photos He worked in this district for several different farmers for ten years.

Wages were low; during winter he worked for room and board. While working for Carl Skrenkowich, ten miles north-east of Clandonald, one of his jobs was to drive the children to school in a sleigh pulled by a team of horses. That winter he decided to go to school for a month.

In the fall of 1938 he bought S.E.31-56-4-4, a quarter section of land east of Lindbergh, also a team of horses and a wagon. There was thirty acres broken and no buildings.

During the winter he stayed with Bill and Sadie Yaremkewich, cut logs and built a two room log house. In the spring, he borrowed machinery and a horse to get his crop in. In summer he mud-plastered the house and lived in it. He baked his own bread, but his bread would never rise as high as he would have liked it. Then one day as he was mixing bread, he forgot to put salt in it and his bread dough rose real high.

On March 3, 1940 he married Helen Woytkiw from Slawa, Alberta. We were blessed with three children, two girls and a boy. They attended V-Day School and when schools were centralized they were taken to Heinsburg by bus. They took their grade twelve in Elk Point.

Stella married Milton Lorenson, son of Henry and Florence Lorenson. They farm east of Lindbergh. Lydia is a supervisor at Firemans Fund (Insurance Company) in Edmonton. Marshel married Sherry Milholland, daughter of Bill and Barbara Milholland, Marshel is a steam engineer at Windsor Salt at Lindbergh. 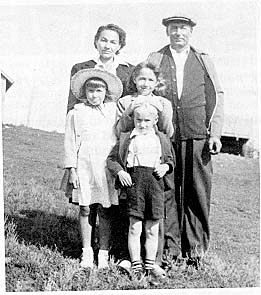