I, Annie Surkan was born in Insinger, Saskatchewan, December 1902. On June 19, 1921 at Debrenowitz Church near Theodore, Saskatchewan, I married John Palynchuk, born at Gorlitz in October 1898. After farming there for seven years we moved to Lindbergh, Alberta in the spring of 1928.

As the one quarter section of land was not enough property, we decided to go into business on a new railway to try to make a better living for ourselves and our children, and to provide more education for our children, Mary, Alexander, Polly, and Dan (Dmetro) who came along in 1930. My education was minimal-two months of the year during the summermonths, obtained by walking two miles to a country school, Chernowitz, near Theodore, Saskatchewan, with grades one to five and seventy pupils in the room. Since I was the oldest in the family of ten, I had very little education, only grade two. As the family was growing I had to baby sit. I was taught reading and arithmetic in which I was very good and we had one hour a day in Ukrainian lessons. The district was Ukrainian, with only two Icelandic families in the area. 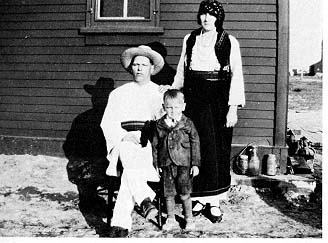 My husband came in the fall of 1927 looking over the country as there were friends, (already farming in the Elk Point area), who came from Saskatchewan, we decided Lindberg would be the place for a prosperous future. The C.N.R. came through in the spring of 1928 and wife and family came by rail to Edmonton then to Elk Point. From here we travelled by team and wagon driven by Mr. Henry over trails and hills and sandy soil. When it rained, water came down in such torrents that it made ravines in the road. 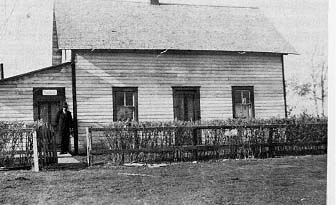 We operated the store in Lindberg until 1946. On an Easter Sunday, 1944, I stopped by to see Mr. C.J. Markstad and we made a deal by which I purchased his general store. I made a down payment of $300.00. With the help of my daughters I operated stores at Lindberg, Heinsburg and Elk Point.

Heinsburg was then taken over by Mary and her husband Louis Kapjack. In 1945 Lindberg store was sold to Mr. And Mrs. Mike Fedyk who died shortly after; then I resold it to Mr. and Mrs. Carl Heinemann. The Elk Point store managed

by myself and daughter Polly, was sold to Mr. and Mrs. Harry Shewchuk in December of 1946.

In the early years we travelled by team of horses and wagon or buggy. At times these roads, actually trails, were so bad that, can you imagine such a thing - we got stuck going down the hill, especially after you were caught in a rain. Water running down made deep ravines in the road.

Our mail came to old Mooswa, (where the Lindberg Salt Plant is at present) once a week and Mr. Arthur Bowtell was the telegraph operator at that time.

In 1930, the depression years, we were already at Lindberg having a hard time as customers could not pay their bills and neither could we. Wheat was 20 cents a bushel, eggs 4 cents to 8 cents a dozen, butter 25 cents a pound, and cattle from five to ten dollars a cow. A five-gallon can of cream would bring in only $1.98 and lucky if you could get $2.25 a can. Indian and white customers dug and dried sacks of seneca roots which they used for trade in the store. Then, dried roots were ten cents per pound. A hundred pound flour sack full of dried roots weighed approximately twenty-five pounds. Assistance was very, very hard to come by and whoever did get any did not get more than five dollars a month and that was limited to staple foods only. We took cattle at a hundred dollars a piece to apply on the accounts owing but we could only get from five to ten dollars a cow for them when we sold them on the market.

Dwellings were of lumber with outdoor toilet. Water came from either a spring or the town well which was dug by the CNR; baths were taken in a round galvanized tub. Lights were coal oil lamps and candles used for emergency when one was out of coal oil. There was no interior decoration. We lived in a lean-to 18 by 20 just painted in blue. Heat was supplied by a cook stove plus an oil drum made into a stove-using tamerack wood bought at $3.00 a load. These oil drum stoves were made by a blacksmith, had triangle legs bolted on, with one end cut to a square, two hinges put on with a handle on the opposite side of the door. Tamarack or poplar chunks of wood were used to stoke it every few hours as the temperatures at that time used to dip into the thirties and fifties for weeks at a time, but nobody complained. People did not have the clothing we have today either. Men had mackinaws, women only cotton dresses and stockings; foot wear was socks and rubbers and lucky if you could afford a pair of buckled cloth overshoes. Men going for wood and taking lunch would find it frozen so they would have to make a sort of bonfire, make tea in a can with snow water, and toast their frozen bread over the fire.

It was far to go into town to hospitals so many home remedies were used. There were bread and milk for poultices, dirt for bee stings, garlic for all-round purposes, hot milk and grease from geese or chicken fat rubbed on brown paper for chest colds, hot foot baths with a tablespoon of mustard, onions plus honey, teas of nettle, and many others that were handed down from the grandparents.

We lived mostly on home-grown vegetables, borsch, cottage cheese, milk, saurkraut, potatoes and in winter when it could be kept frozen, meat such as pork and chicken. Very few canned as they could not afford to buy jars. In Saskatchewan to the nearest hospital was fifty miles which was very terribly far in those days. In Alberta it was at Elk Point or else to Edmonton which was really an adventure to go to in those days.

In 1918 in October was the big flu epidemic. In our family of ten only my Dad was up, and only just to keep the fires going to keep hot and warm water on hand to drink as nobody could eat anything.

For entertainment there were dances just about weekly in the homes with music by whoever could play any instrument. In summer were school picnics, and picture shows once a month shown by Mr. Dan Bazian. Later a hall was built by Mr. Carrier (barber by trade) at Lindberg and music was by Roy Hatchard and his band. Hobbies were quilting and knitting. Children had home-made toboggans and home-made sleds and in summer they played ball.

My family grew up and received a better education than myself. Mary married Louis Kapjack and was in business in Heinsburg until Louis died in 1972. Alexander married Leona Day. Alex is an engineer with Western Instruments in Edmonton. Polly married Gordon Winters and Polly is a secretary in Seattle. Dan married Mary Adams and is a barrister and solicitor. His wife is a secretary for him in Saskatoon Dan's wife died in 1976. I am semi-retired, living and renting homes in Saskatoon. 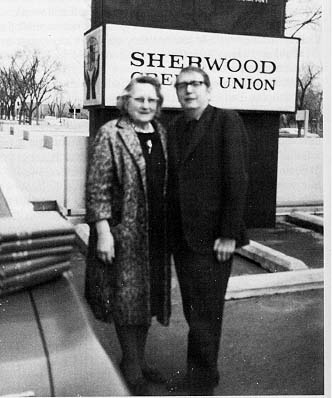 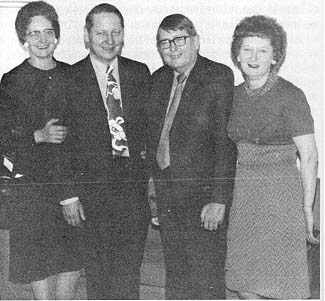