Between Jingle Bells, Wedding Bells, and the glitter of Diamond Rings, we've all had a very exciting and memorable winter.

Our Fourth Xmas Concert was enjoyed by all the Cascade families gathered in the Recreation Room of the Staff House, on December 19th.

Mrs. Baden Wright and Mr. A. C. Blackwood and son, Matt, were guests from Edmonton. 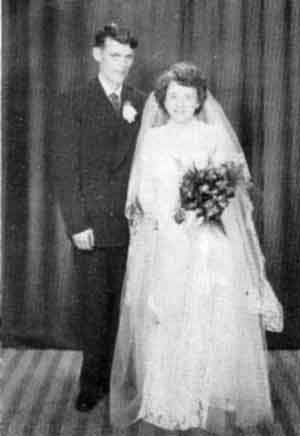 On December 20th, Doreen Anderson, our correspondent at Lindbergh became Mrs. Larry Gray. The wedding was held in the United Church, at Elk Point. Co-workers Dorothy Allen and Steffie Uchman were among the bridesmaids, and Mrs. Bob Lorenson helped dress the Bride. Mrs. Lorenson also baked the wedding cake â in keeping a promise she had jokingly made a year ago to Doreen, to "bake her wedding cake â if she wasn't too old."

Congratulations and best wishes to both Doreen and Larry Gray, from all of us in the Salt Family.

The Entertainment Committee arranged the program in Schoolroom Fashion with Luanne Ayres acting as the Teacher. The children put on a splendid show, with recitations, drills, novelty numbers and songs.

Bert Ayres led the audience in the singing of Carols and Mrs. Irene Anderson supplied the guitar music, throughout the program.

For a very fine evening, our thanks to the Management and to all those who worked so hard in preparing the Concert.

The townsite children and grown-ups have enjoyed the Toboggan Slide this year. Alf. Fakeley engineered the building of a wooden ramp at the starting point and we have found there's no changing your mind when your sled goes over the bend. A sleigh-ride party was arranged in January and we had so much fun, we'll be doing it again very soon.

A Canasta Party was held on January 31st. It was the first time Canasta was played in our Club and we think it will be quite popular in future. The first prizes were won by Mrs. Ayres and Mr. Wright. The usual lovely lunch was served by the Committee.