There's a lady in Lindbergh who makes the yummiest pies, âshe is Irene Anderson and she runs the Staff House. Don Lumby and I arrived at Lindbergh one late January afternoon and after poking round the plant a bit and making a social call or two, we got to the Staff House for dinner just a little late. We had the dining room to ourselves and could argue without constraint. It was the pieâdelicious beyond praise â that started it. We agreed it was marvelous, but what was it? For every suggestion either one of us made, there was a counter argument, â the color wasn't the right shade for Don's ideas, the flavor wasn't exactly what mine called for, only better. We suspected blue-berries. In desperation, we put the problem to Irene. She laughed, â "That pie" she said "is a mixture of blue berries and cranberries. I always put a few cranberries in. They give a real zip to the flavor."

Then and there the "blanberry" pie was born. Mix up "blue" and "cran" and you'll see how it happened.

Next morning at breakfast Don and I started talking about blanberries. Sure enough, a few eye-brows arched up in surprise, and questions began to pop. What were blanberries? About this time Irene, who was in on the joke, comes along and listens in. We can see her smothering a terrific urge to laughter, and just to keep from busting a corset, she soon goes back to the kitchen. Well, it's a long story but if sometime next fall you Lindberghers see a couple of guys sliding out with shot-guns in the early dawn, you can bet they're trailing down a few snarks, which Don carefully explained were a cross between the kangaroo rat and the arctic vole, and they're a sure lead to a blanberry patch.

Well, when Irene recovered her composure, she gave us the choosing of the pie for lunch. "Make it lemon", said Don and I in one breath, and she did. It was superb. Yes, there's a lady in Lindbergh who makes wonderful pies.

Congratulations to Dan Allen who received his 5 year pin on February 22nd, 1955!

A Doughnut and Coffee Party was held on March 18 in the Dairy Mill for all Plant employees. The occasion was another "accident free month". Let's keep it up gang â those doughnuts sure are swell!

Employees and Friends of the Davidson Family gathered in the Recreation Room on March 18th to bid farewell to Chief Engineer Davidson and family. Nick Elaschuk, on behalf of the Plant employees presented the Davidsons with a coffee table. The Davidsons will make their home in Calgary.

A Surprise Farewell Party was held at the Davidson home on March 17th with Margie and Tommy Davidson as guests of honor. Marge was presented with a lamp and Tommy with a flash camera. The teenagers also gave Mr. and Mrs. Davidson a lamp.

Mel and Elsie Schumaker and son Christopher have also decided to make their home in Calgary. They left on February 21st for warmer climes.

A warm welcome was extended to our visitors J. J.

Another visitor who braved the cold was Dr. Wendell Waterman, Morton Salt Company Chicago, who visited us one day in February. After mentioning to him that it had dropped to 72 deg. below here last winter he seemed a bit anxious to leave!

There has been a great deal of building going on at our Plant lately. Alex Wyness, Production Foreman has a new office and we hear via the grape vine that Ron Seal, Maintenance Foreman and George Krissa, Shipping Foreman are also in line for new offices.

If anyone wants to know what it's like to be a goldfish just ask our Packaging girls! Ever since they put up the new partition around the Packaging equipment our gals have been singing "Don't Fence Me In".

Two rinks from the plant braved the cold weather to curl in Heinsburg, this winter. The rinks: â Skip Doris Wiegerinck, Third T. 0. Davidson, Second Mel Schumaker, Lead Bill Anderson and Skip Don Frazier, Third Twe Horton, Second Alf Fakeley, Lead Joyce Frazier. We didn't win any sensational prizes like cars or TV sets but the rink skipped by Doris won four cups and saucers in the Opening Spiel at Heinsburg. We have to give Don Frazier's rink credit for winning most of their games in the Round Robin. After seeing some of the games they played in the Elk Point Spiel we wonder how they managed to do it! 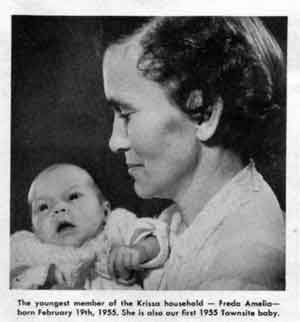 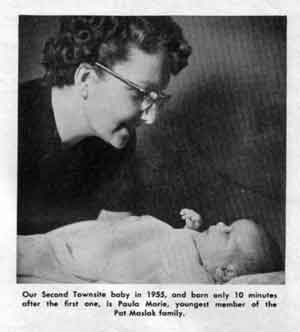 Congratulations go out to our proud parents on the Townsite!

At time of writing we have another new townsite resident. Born to Mr. and Mrs. Alex Wyness ( Prod. Foreman) a baby boy, Alex Lyle on March 16th. We'll try and have a picture next time!

Herb Wyness, R.C.A.F. has been transferred to Cold Lake, Alberta.

Seems that Susan and Martin Sills had a slight argument over a handful of popcorn the other day while standing on the basement stairs. That was a mighty expensive handful of popcorn â a broken collarbone and a pretty sore little boy. Wasn't worth it, was it, Martin?