Application For Admission To The

Preference will be given to those persons who find that Windsor Club Social Evenings are too hectic and consequently stay away.

The home is available to persons of any age who are incapacitated to the extent that they are unable to lift a curling rock to join in Windsor Club curling.

Also given priority status will be those persons who cannot keep up the pace in the Annual Windsor Club Cribbage Tournament.

Those persons who choose not to attend the Annual Windsor Club Barbecue for steaks can have their names entered on the waiting list.

As Windsor Club Shuffleboard Tournaments are classed as a strenuous sport, persons who do not take part in these are asked to take a medical examination prior to application.

For those persons who continuously squat in front of the T.V. while all the above Windsor Club activities are going on and consequently are unable to stand erect, special assistance will be given by active Windsor Club Members, if they are available, or exist.

No fee shall be charged by the Home, but a board of examiners shall pass on all applications. To be fair, the board must decide which persons have been dead the longest in order to establish priorities. This will be done by checking the attendance record of past Windsor Club meetings.

Ron Seal is maintenance supervisor at Lindbergh. He was born in the community of  Ethel Wyn which is 15 miles from Lindbergh, Alberta on April 6, 1916.

As maintenance supervisor he is in charge of all maintenance for all plant areas and town site in Lindbergh. His hobbies are gardening and fishing and also enjoys golfing and curling. A football fan, he supports the Edmonton Eskimos until the hockey season rolls around when he becomes a Toronto Maple Leaf fan.

On May 1, 1947 he married Lillian, better known as Lily, and together they have had five children ; Lorraine, Cheryl, Dale, Myrna and Tom. As far as the younger generation is concerned Ron says the only thing wrong with them is that they are younger than we are. Ron and Lily hope to make a visit to British Columbia this summer and Ron hopes to do some trout fishing. 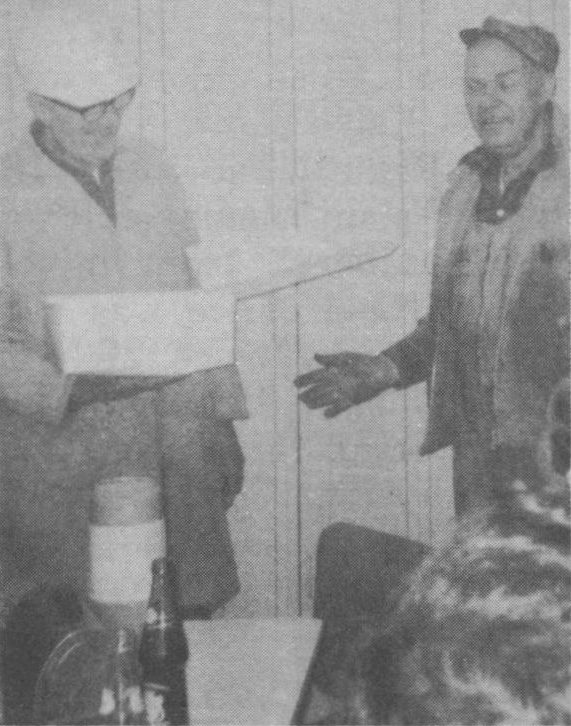 Gerald Stults presents Ron Seal, left, with a birthday cake from the maintenance crew at Lindbergh.

Ron joined the company on January 16, 1952. He was a welder for one year and then spent 22 years as a supervisor. Before joining the company he spent five years at the St. Paul Foundry, two years doing shipyard work and one year at a paving mill.

We're glad That Ron works with the Canadian Salt Company and we wish him many more years of success.

The Regional Tournament was held Saturday, March 13 with 20 winners competing. Winner of the Chemical Workers' Trophy was Jim Young Jr., his wife, Vickie, playing in his place. 270 crib players competed in the 20 units represented.

The Annual Windsor Club Curling Party was held on Friday, April 9 but attendance was small. A pot-luck supper was held at 6:30 p.m. and a social evening followed. Winners of the shuffleboard tournament were : First, W. Pacholek and Karen Stafford; Second, E. Bjornstad and Stella Lorenson.

Gail Hurtubise has submitted her resignation so that she can devote all of her time to being Wife and Mother. We are very sorry to see Gail leave but can appreciate her feelings. Good luck to you, Gail.

Carol Metz filled the vacancy left by Gail. Carol, her husband Lloyd, and their three children have moved to Elk Point from Rimbey, Alberta. Lloyd was the manager for Imperial Lumber in Rimbey and has been transferred to Elk Point. Welcome to Lindbergh, Carol.

Mike Pelech retired April 8, 1976. Mike was the mixer operator for our plant and plans to just "Take it easy for a while." Good luck to you, Mike, in all your new ventures.

John Lukevich, maintenance department, has submitted his resignation. John has worked with the company three years. The maintenance crew presented John with a gift that they invented. John is an electrician and is going into business for himself. Best of luck, John.

John Lukevich (below) shows off the special going away gift which was specially made for him by the maintenance crew at Lindbergh. Side one of the plaque reads "Windsor Float and Lick AwardâCategory Wire Pullers, Stoneboat Jockeys, Plumbers Helpers, Shovel Artists" and side two reads "presented to John Lukevich, May 7, 1976 for finding missing volts, plugging leaking amps, devotion to plugged pipes, systematic shovelling, heroic hammering. He will be greatly missed by all those who will now have to do all these jobs in his place". 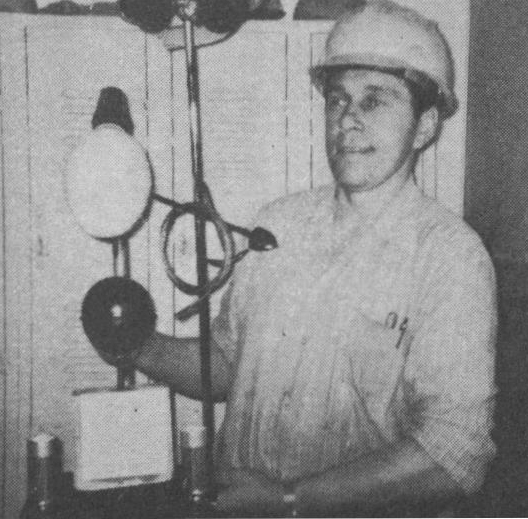 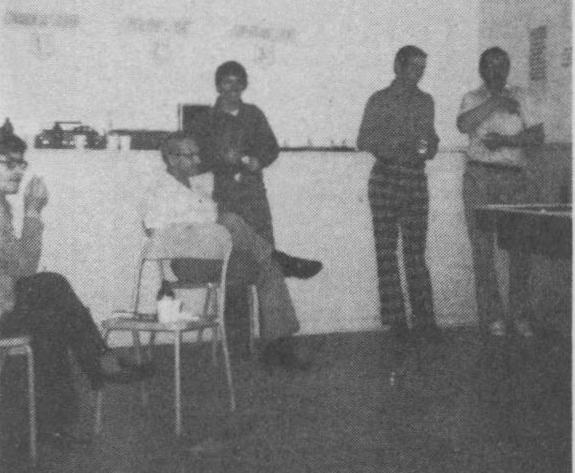 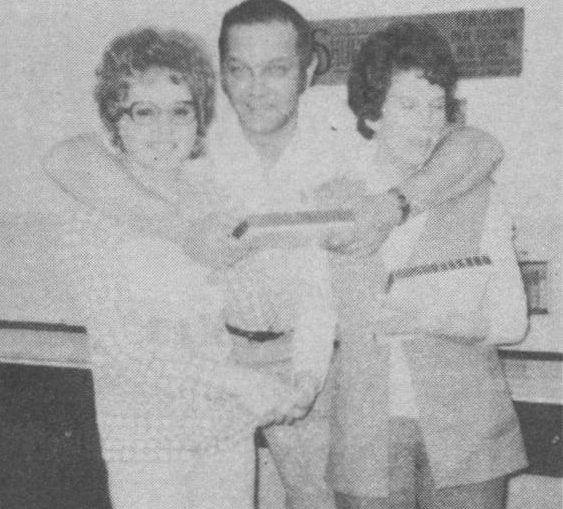 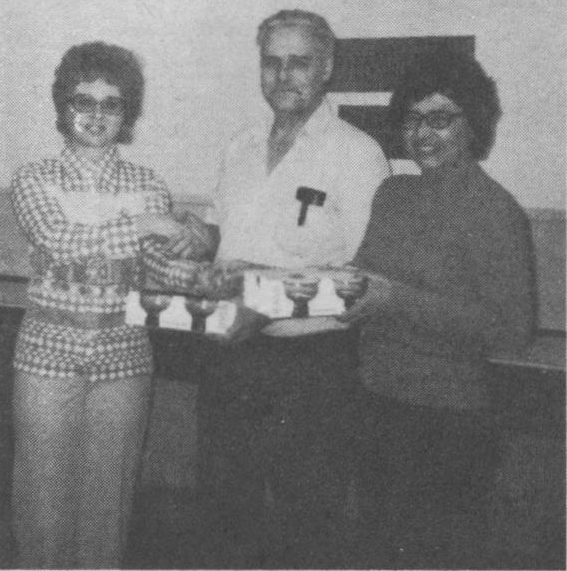 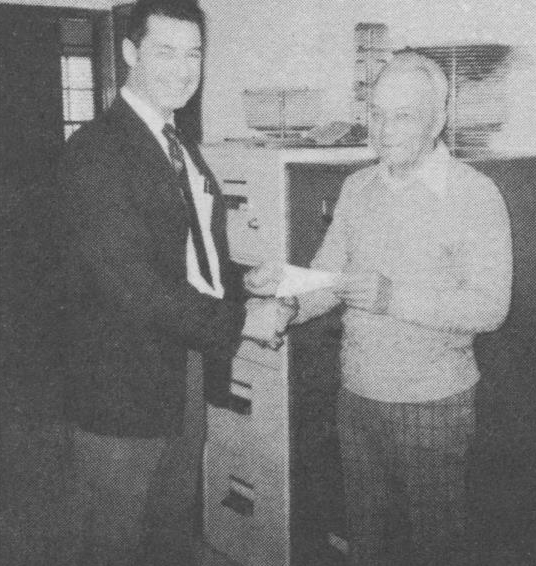 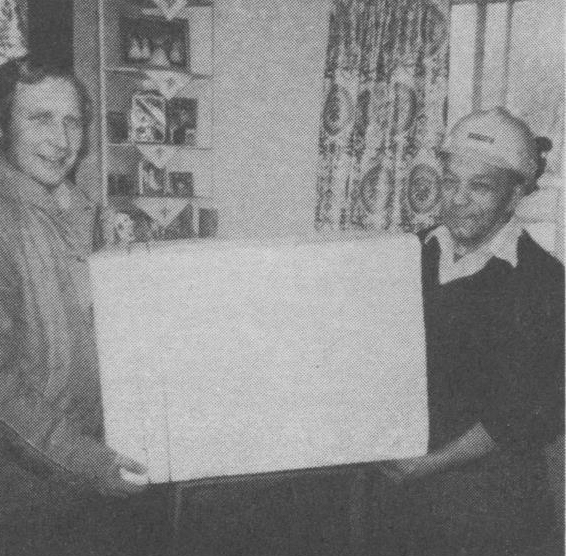 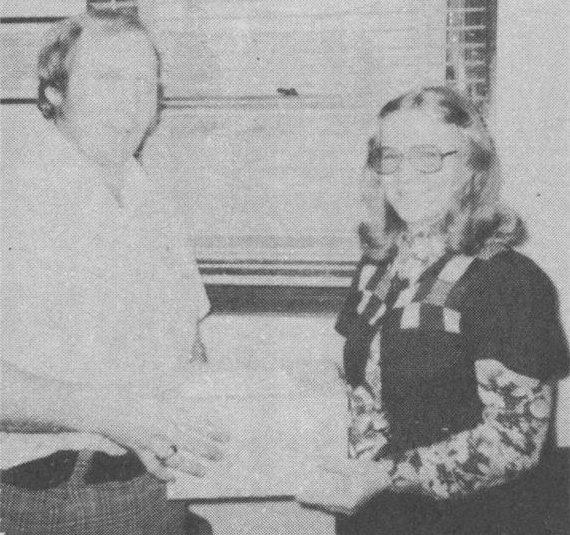 Ed Pankiw presents Gail Hurtubise with going away gift on behalf of the Windsor Goodwill Fund in Lindbergh.

A new milestone in production has been reached in Lindbergh. Production for one month has exceeded 11,000 tons. It is anticipated that an all time high production will be reached for this fiscal year. Production levels should exceed 115,000 tons, providing no major break-downs occur in the next month. Overall yearly production is anticipated to be increased by 10%.

The Lindbergh curlers visited Regina for the annual Lindbergh-Regina match, but refused to part with the A. J. Robinson trophy. Lindberghâenjoy it, because it is going to Regina next year. 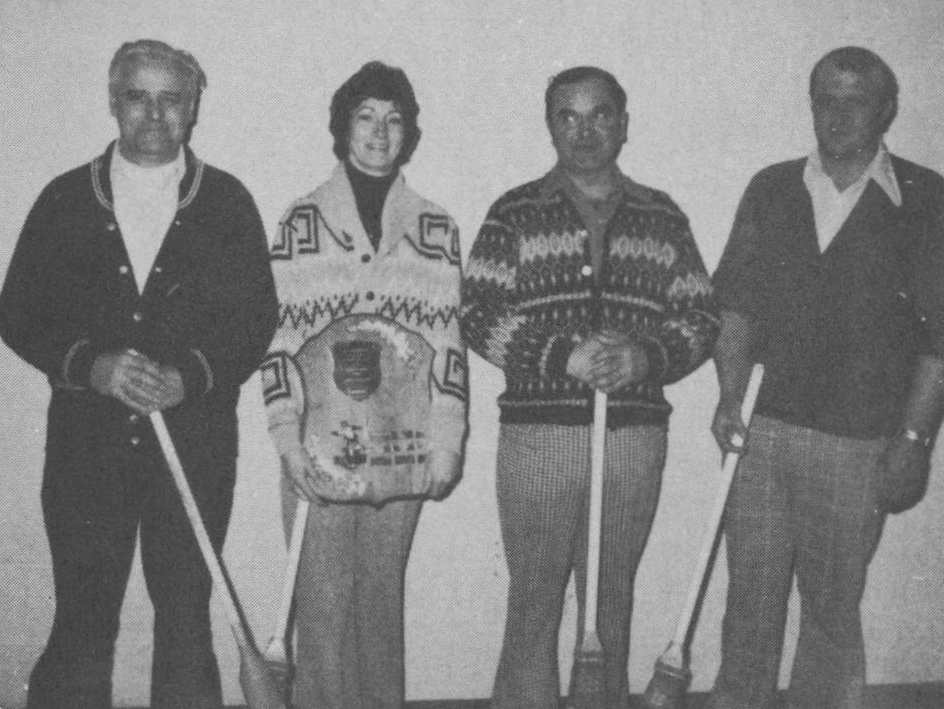 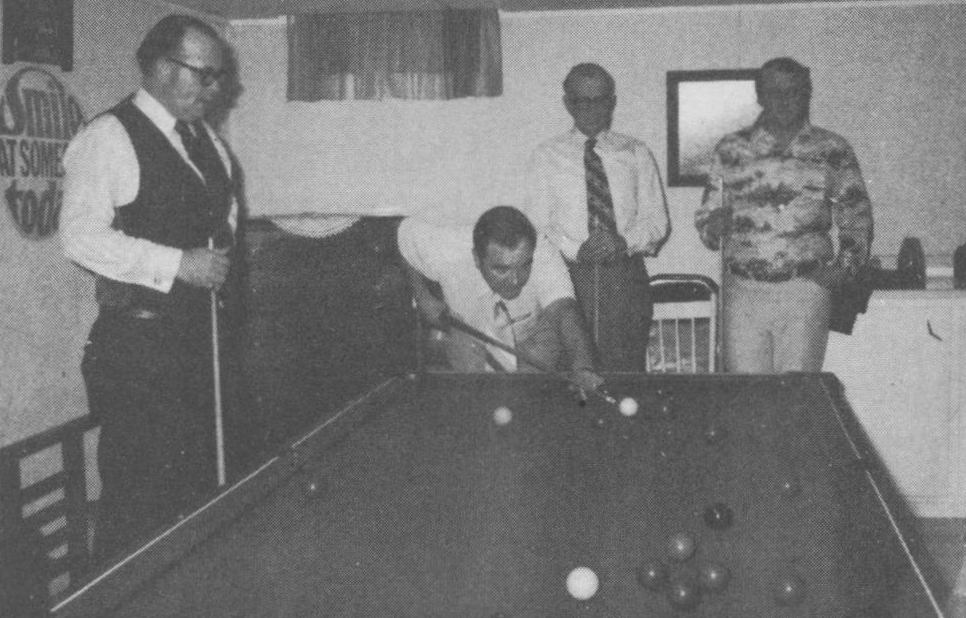 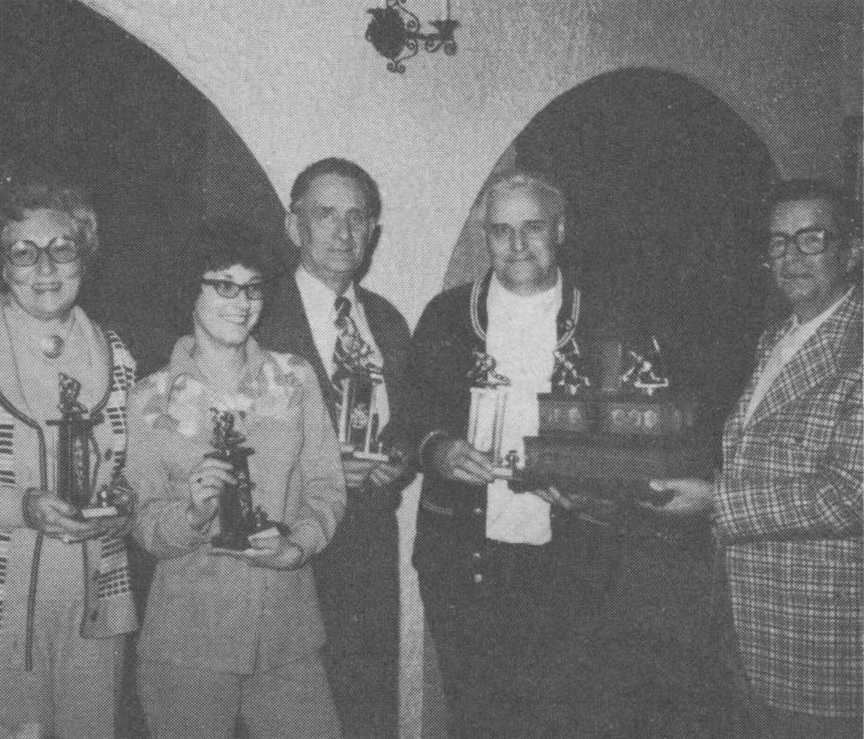 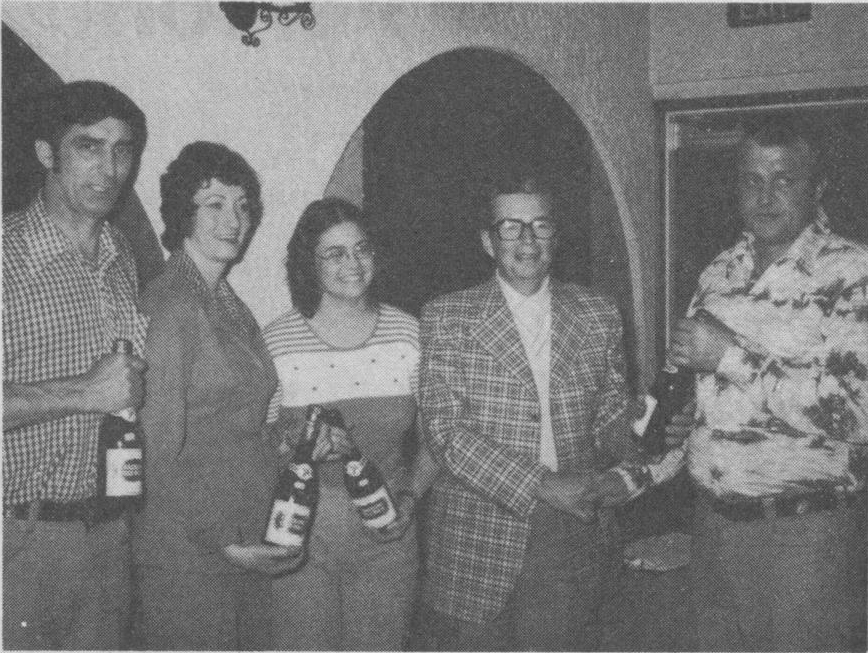 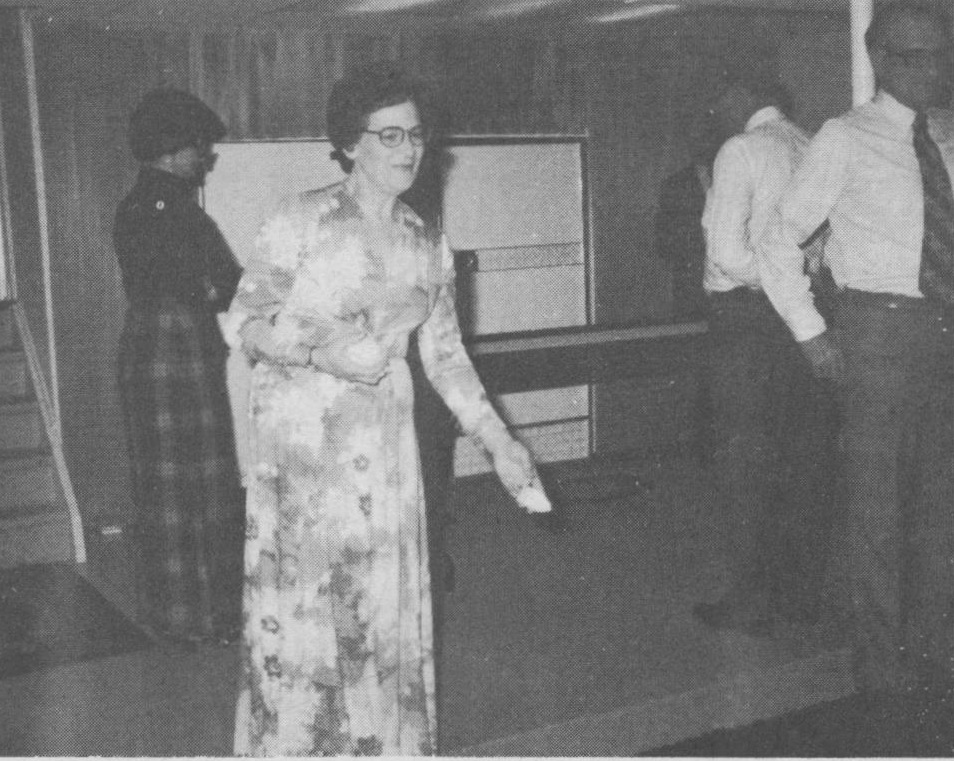 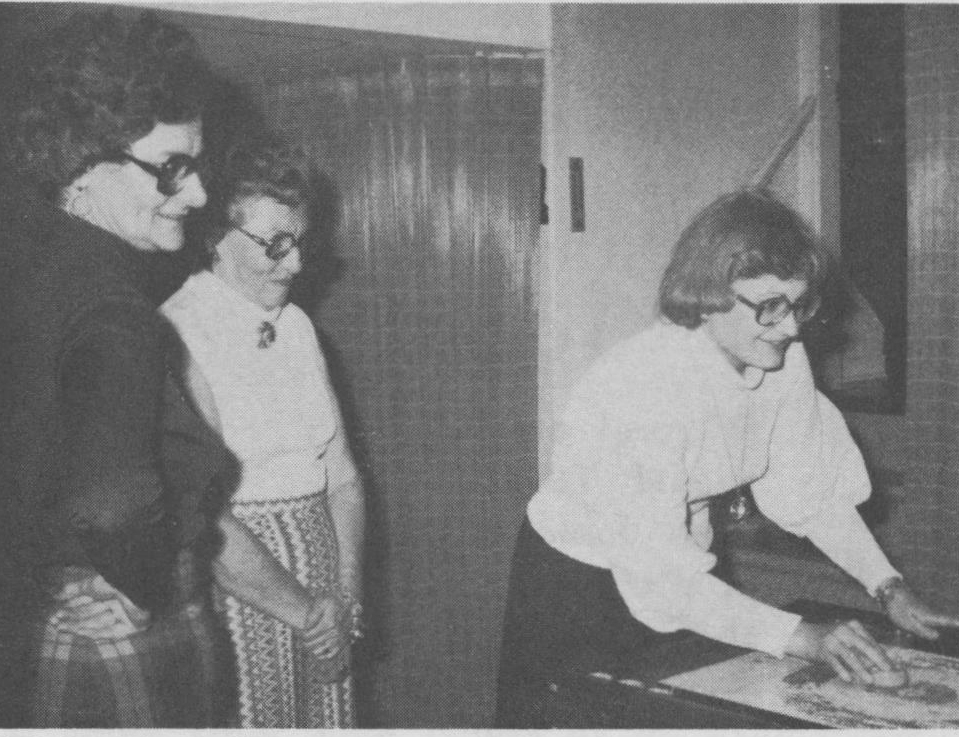 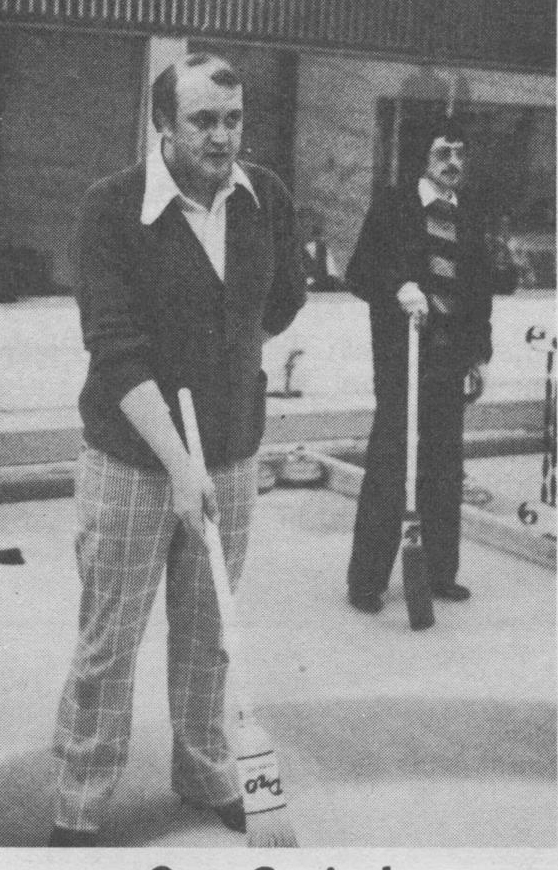 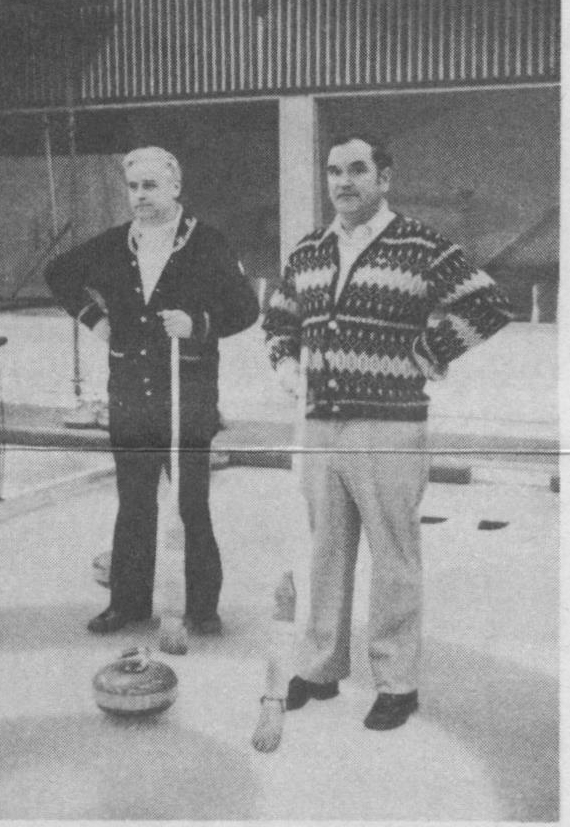