Greetings from all of us here at the Lindbergh plant, way out in Alberta. It's nice to be able to get to meet the other members of the Windsor Salt family through the pages of "Salt Licks", and we hope that before long we'll feel like we know everybody.

What we aim to do in this column each time is sort of introduce ourselves around, one by one (there are 39 of us out here at the moment). So for this first issue, we'd like you to meet Jack Wiebe and his wife.

Jack is one of our engineers, and a veteran of the profession. He originally comes from Vermilion, and has the distinction of being the first resident in our model townsite here. Jack had a big hand, by the way, in the construction of our Salt Works.

Among the things Jack loves best are hunting and fishing trips, and he tells some really good hunting stories. He isn't always the hero of them either â just recently, he and his wife went on a little fishing jaunt. This was Mrs. Wiebe's second trip, and as luck would have it, with the fish jumping all around him, she pulled out four, and each one a different kind. You guessed it -- Jack's catch for the day -- zero. He thinks it's a big joke.

The Wiebes take special pride in their planned home, and both are first-rate gardeners â say, you should have seen their "glads" this year. They're nice people, both of them, like a good joke, and take part in everything that's doing out here. 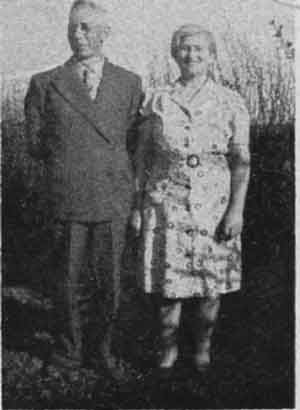