Since last issue we have had the pleasure of a visit from Messrs. Hobson, Mair, O'Day and Wilson. Mr. Hobson and Mr. Mair managed to find time from business to do a little hunting. The ducks were not as co-operative as they might have been, due to the numerous feeding places and the clear weather. They were flying pretty high, but the fellows had several good shots.

Mr. Hobson and Mr. Mair were hosts to the supervisory staff for a mouth-watering duck dinner at the Curling Rink. Some of the boys out here are still licking their chops. We are wondering if Mr. Hobson could be persuaded to publish his recipe for preparing wild duck. How about it for the next issue of the Salt Licks?

Following the dinner Mr. Hobson gave a talk covering his impressions of the plant and plans for the future. He also extended congratulations to Howard Austin on completion of twenty year's service with the Company.

Good wishes were also extended to Louie Grosso on the occasion of his sixty-seventh birthday.

A sing-song followed, led by Mrs. Crebas, N. C. Hobson and Howard Austin, who were ably accompanied by Jack Mair on the piano. After several gusty selections, Mr. Mair was heard to say: "I play on the white keys and I play on the black keys, but you guys are singing in the cracks!!"

During their visit here, the fellows were dinner guests at the Williams' residence.

Mr. O'Day and Mr. Wilson didn't do any hunting, but we believe they enjoyed themselves very much, particularly the dinners.

While on the subject of hunting and hunters, we must congratulate our own George Krissa who recently returned from a hunting trip in the Edson district where he bagged a three point buck. Good work, George! That new rifle must have paid off.

The annual Hallowe'en party was held in the Curling Rink October 29th, with all the local goblins in attendance.

We wish to extend a hearty welcome to Stella Lorenson, Nora Cundliffe, Delphine Grauman, Annette Lungul and Sonia Bjornskaret who joined the "Salt Family" this month.

The Windsor Club held a very successful Turkey Shoot on October 2nd. It looks like a costly way of getting a Thanksgiving turkey.

Best wishes for much happiness go out to Mr. and Mrs. Milton Lorenson (nee Stella Pelech, packager) on the occasion of their recent marriage. May all your troubles be little ones.

George Krissa has been telling us that he was not going to buy a TV set until spring. Well, it sure was a short winter wasn't it, George!

We are pleased to announce that the Windsor Club has just completed rejuvenation of the local skating rink.

Since last issue we have said farewell to Steve Kalynchuk, who left the Company to pursue his own interests in the wide field of agriculture. Steve was presented with a very nice smoker stand and lighter from the gang at Lindbergh works.

We have been told that there is a new type of auto on the market; it's called a motorless V-8! At least Ross Anderson tells us he bought one. Do you push it or pull it, Ross?

The Willow Range Bandit was granted a short reprieve due to the unexpected illness of the prosecuting attorney; but we understand he will be "clicking his heels" in front of the mahogany e'er the old year ends.

Someone has been aiding and abetting the tire manufacturing companies by spreading shingle nails along certain sections of Lindbergh streets. Some people suspect the Schulz' gang â I wonder.

As this will be our last issue before Christmas, ye auld Associate Editor would like to extend the heartiest of season's greetings to "Auld Salts" everywhere.  -- G.C.C. 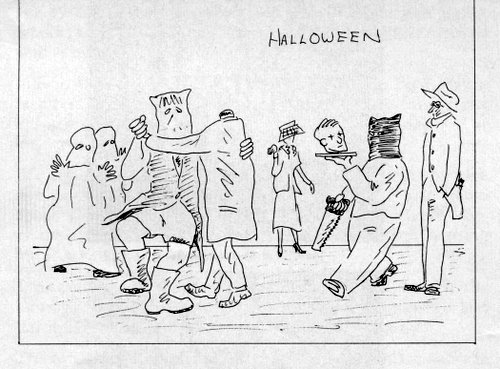 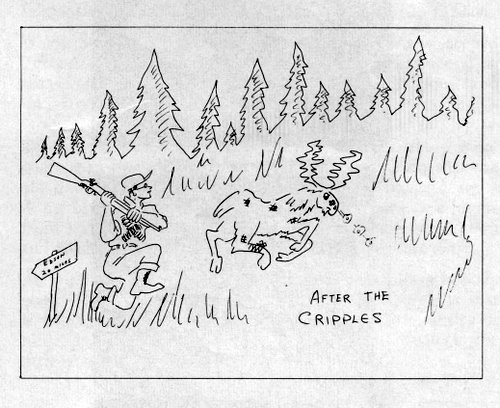 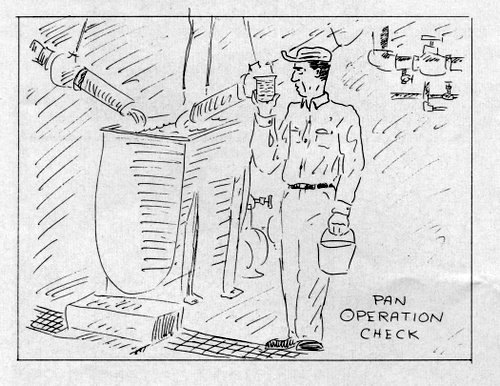 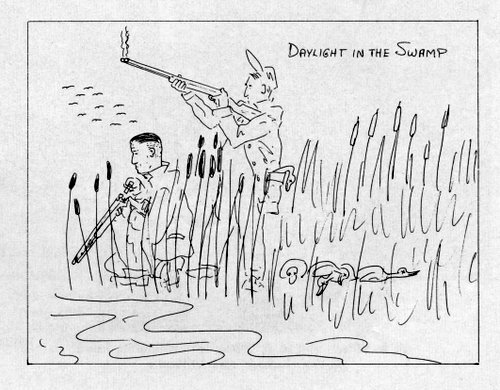 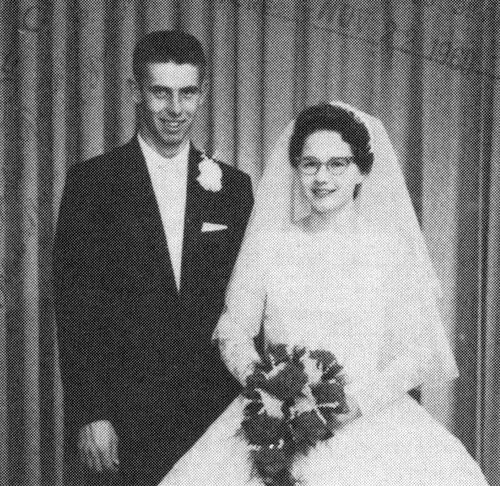 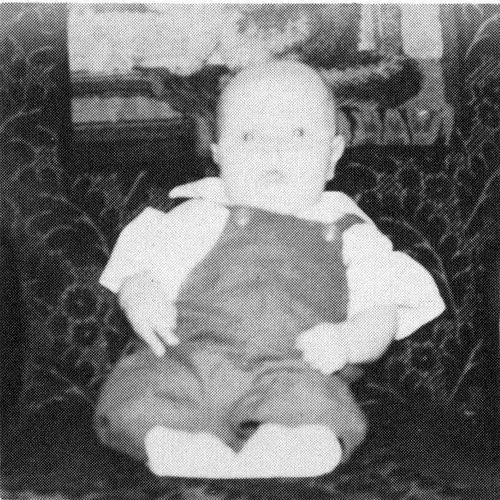 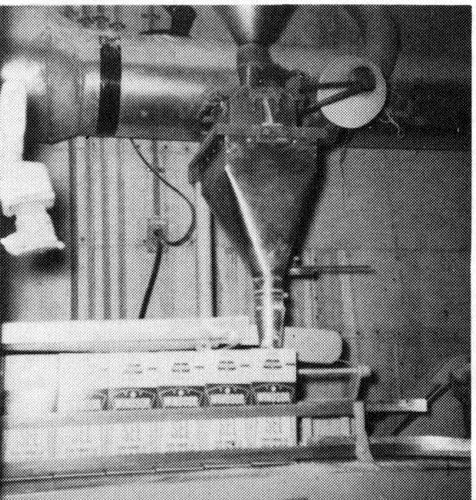 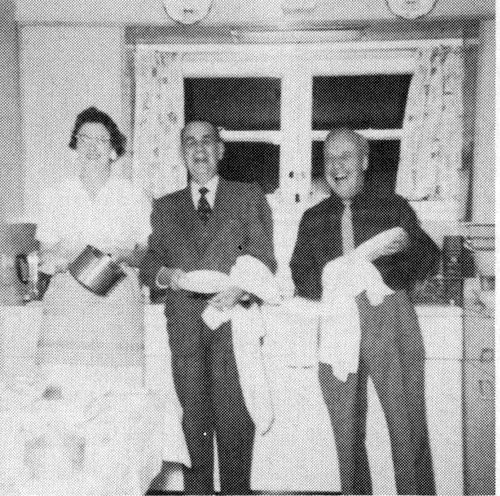 H. A. Wilson and M. F. O'Day lend a helping hand to their hostess, Mrs. Williams. 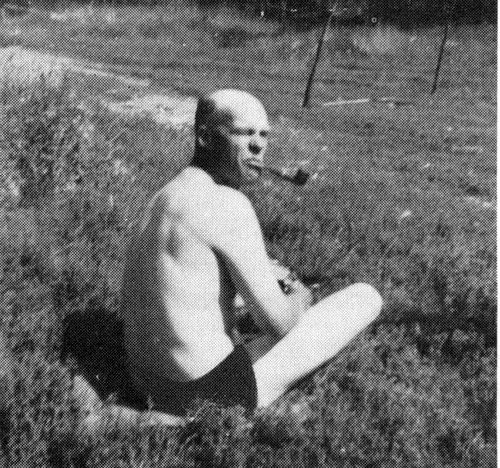 "In the Good Old Summertime!" Gerald Stults on vacation. 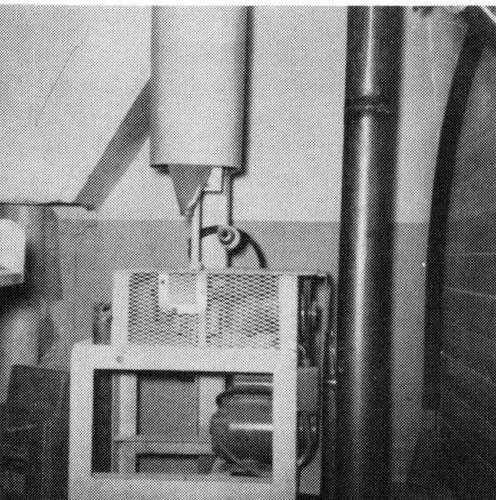 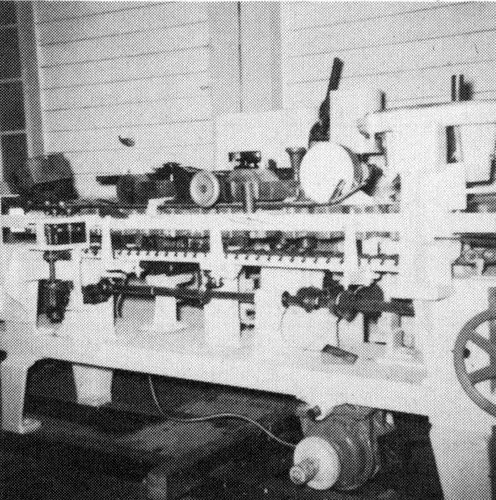 New Square Can packaging machine soon to go into operation at Lindbergh.