Christmas at Lindbergh is something you'll have to experience. There is no other way to really appreciate it. This is just a sample of what we did, what we saw and what happened:â

A Christmas Tree with Sparkling Lights and all decked out with "Windsor" Rounds, pockets and miniatures in the Dairy Mill. Herb Sutton and Mike Pelch looked after the decorating. A 50 lbs. block served as a base for the tree. A bit of paraffin wax poured around the trunk inserted into the posthole did the trick. A background of empty "Windsor" sacks stapled to the wall completed the picture. Next year we'll try sprinkling the glue-dipped branches with "F.C. FUSED" or "SNOWFLAKE" for added realism â and make the tree fire-resistant, too! ( Sales Dept. please note: The above makes an attractive and "different" display.)

Doughnuts in the Dairy Mill and coffee served at three made things even more "Christmassy". Twe Horton had brewed the coffee â "black as night, strong as sin and hot as h . . ." While enjoying it, Mr. Sills told us about the virtues of working safely and efficiently, wished all of us a Merry Christmas and a Happy and Prosperous New Year, and took a picture which was a dud because he didn't pull the slide â or some such thing.

The Kiddies' Christmas Carnival at the Staff House was the usual success, although Santa was a bit late getting there. Seems that his reindeer couldn't get a foothold on a stretch of icy road near Keitges' Hill. George Krissa took care of that matter by immediately dispatching a couple of sacks of "C.C. FUSED". Moments later Santa arrived with a bulging bag of toys and stuff 'n' things for each and everyone.

After the children had had their fill of fun and had been whisked away and tucked into bed, the "grown-ups" regrouped in the Staff House and had a little party of their own. There was talent galore to supply music befitting any mood or taste. Augie Bartling was, perhaps, one of the brightest stars. With closed eyes he coaxed the most bewitching melodies and dance rythms from his fiddle. A picture of "Augie in Action" appears elsewhere in this issue.

Christmas Carolers Are Real at Lindbergh â not some thing that exists only in the imagination of Christmas card artists. Ask the Sills' â they have proof positive that they are real. For twelve of them sang Christmas Carols outside their window at midnight on Christmas Eve. The carolling continued in their home for another hour or two and rarely has a stranger combination of minor and major chords reverberated through the stillness at Lindbergh. Even the coyotes across the river pricked up an ear, listened, and â hurriedly departed deeper into the wintry forest. 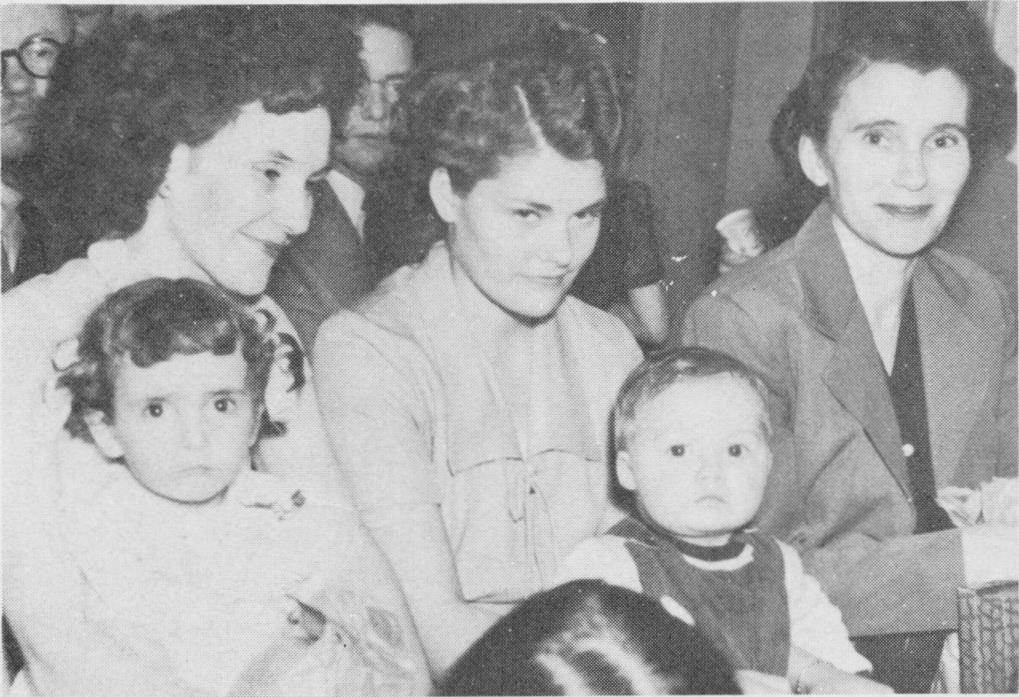 Darlene Wyness and James Bartee. At the right is Maude
Krissa, whose husband, George, looks after the Shipping
Department in Lindbergh. 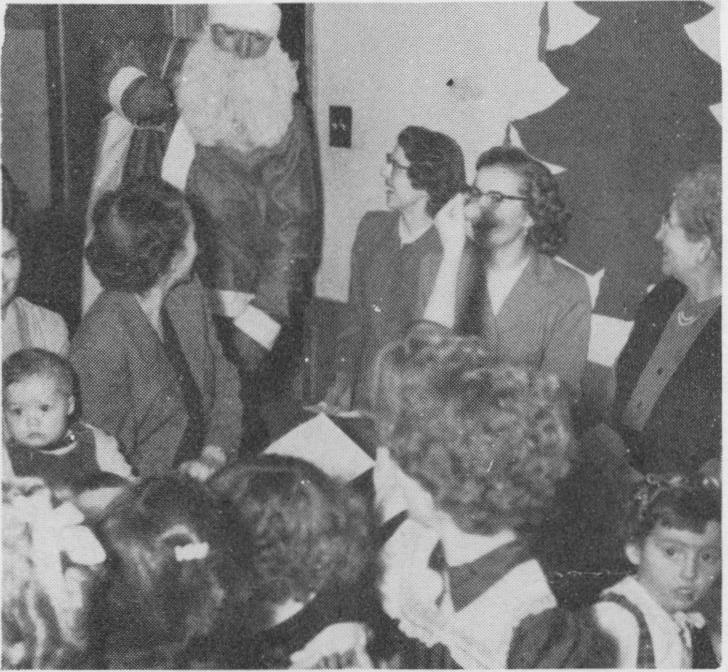 Santa Arrives at Lindbergh, welcomed by excited youngsters and
smiling adults, to distribute turkeys and toys. 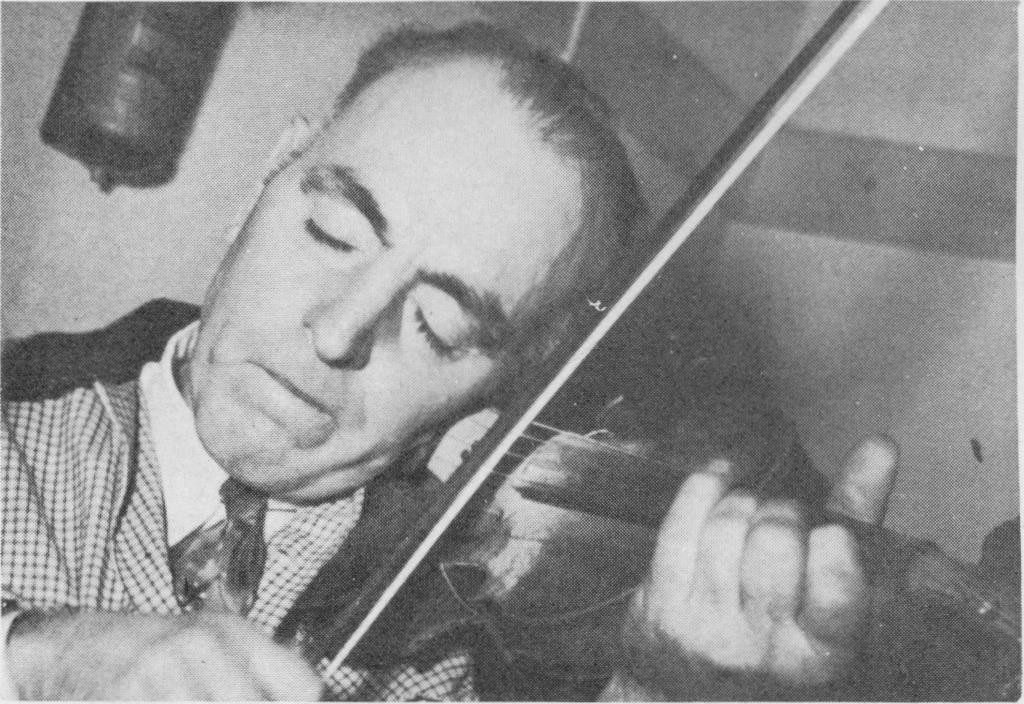 Lindbergh's Augie Bartling making music "that sends you". One-
step, two-step or an old-fashioned waltz â Augie knew and
played 'em all!

AND HERE'S MORE LINDBERGH NEWS Lucky People. Pat Maslak and family received a bathroom, complete with operating instructions, for Christmas. Ron Seal, Henry Seiler and George Boning hardly took time off for lunch in order to complete the installation on time. Trial runs were held the day before Christmas and proved highly satisfactory. The official opening is scheduled for a later date â after Pat has given the interior a coat of paint.

Cheers for Ralph Storey, who treated himself to a brand- new tractor for Christmas. For five years or more Ralph has walked the 51/2 miles to the Plant and 51/2 miles back each day. Even at 60 below Ralph arrived punctually at 4 p.m. and attended to his duties. At midnight he'd get bundled up again, sling his lunch kit over his shoulder and head for home, not caring that in the meantime the mercury column had shrunk another ten degrees and was now registering 70 below! Can anyone â anywhere âtop this for performance, stamina and reliability?

We Are Sorry for: Doreen Anderson, who is hospitalized at the moment. Cheer up, Doreen, things will be O.K. again before you know it!

Nick Elaschuk, who is limping around with his foot in a cast. Nick was standing on a ladder, bending conduit with a home-made "hickey". Hickey broke and down came Nick, hickey, ladder and all! Says Nick: "Only fools use home-made tools!" 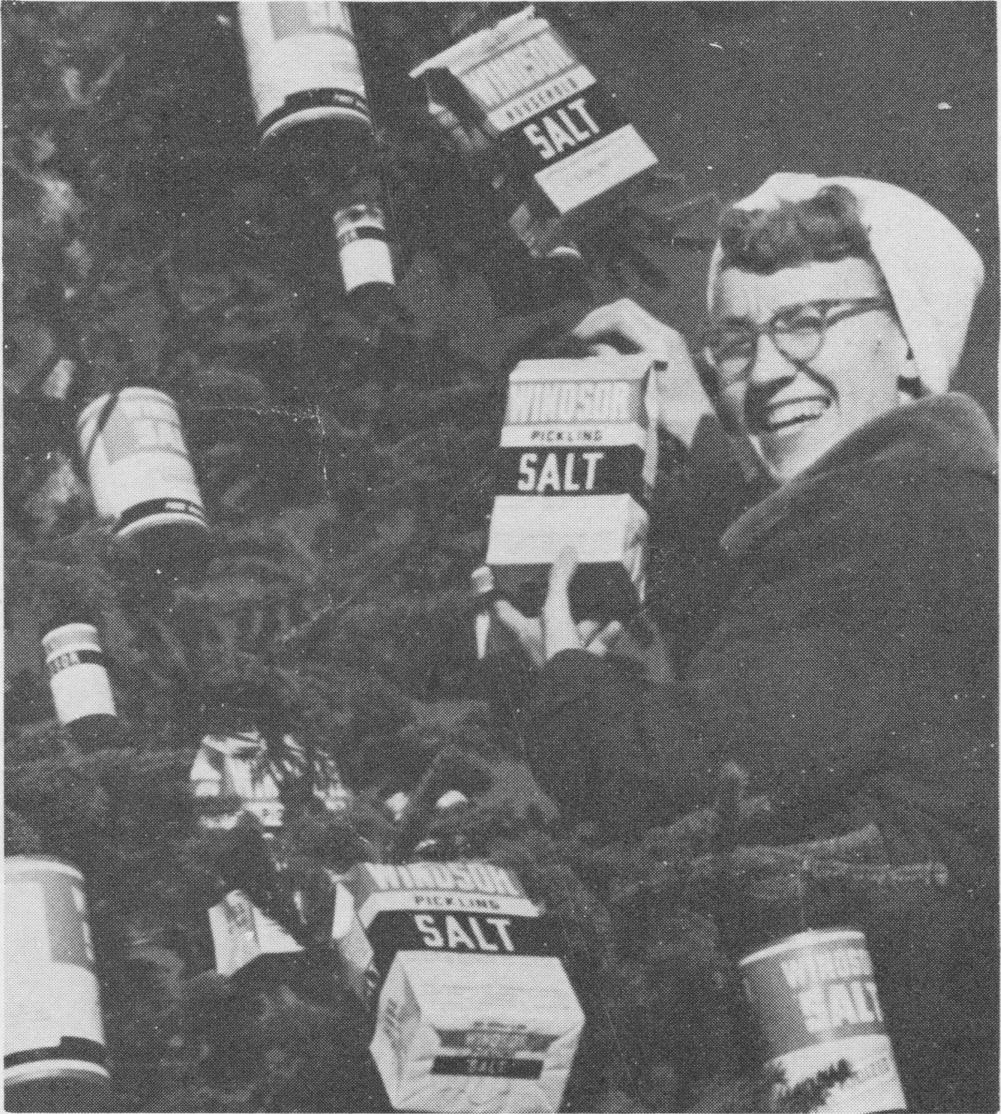 Lindbergh Starts a New Fashion in Xmas tree decorations. The
red, white and blue of puffed-up 5 lbs. pockets, 2 lbs. rounds
and miniatures contrasts nicely with the dark green of the
pine to produce a novel and striking effect. Straightened-out
paper clips serve as hangers. The tree, here being decorated
by smiling Ann Zarony, is located near the plant gate and
greets all-who enter. Illuminated at night, it has attracted
attention far and wide. 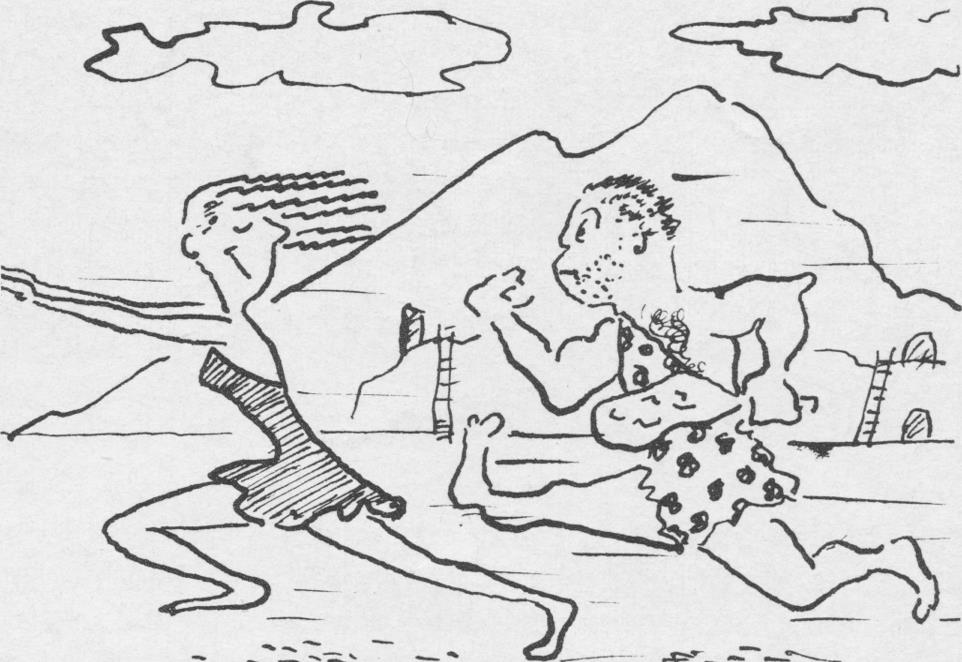 Did you know that kissing started out as pure and simple chemistry?

It started over a craving for salt â not love. The cave man discovered that salt helped him in the hot weather. He found he could get salt by licking his neighbor's cheek. Then he discovered it was more fun if the neighbor was of the opposite sex.

And then, everybody forgot about salt. 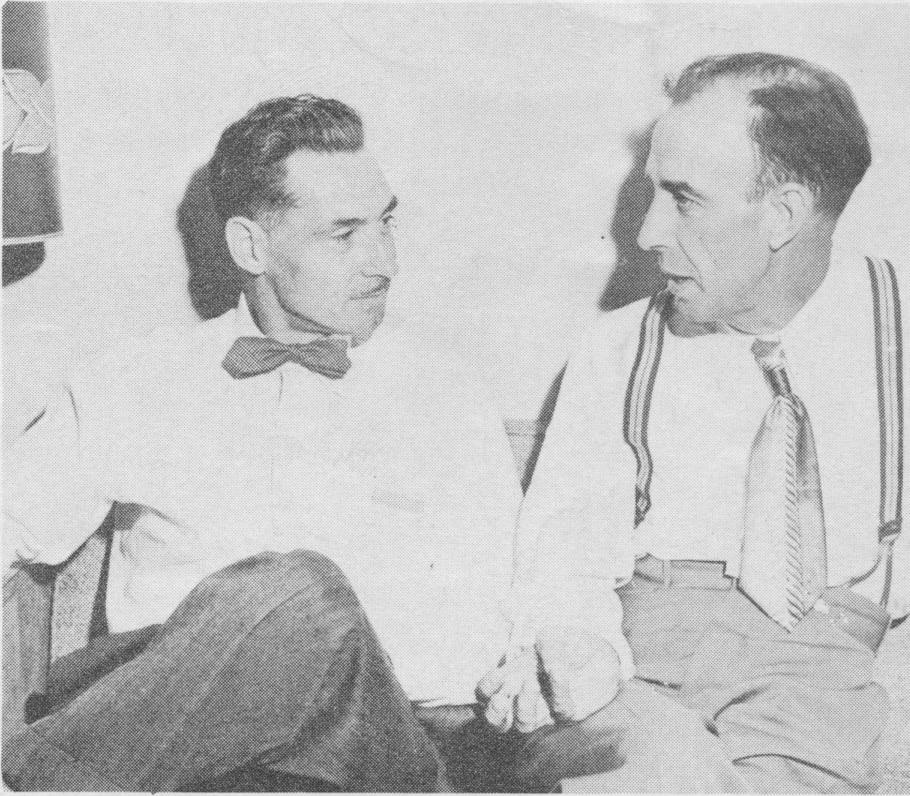 East-West Meeting. â Bert Ayres (left), Lindbergh Works Manager, and J. McQuarrie, Malagash Mine Manager, who produce salt at locations 2,500 miles apart, meet here at Windsor for the first time. What do you think they're discussing? Salt, of course.