Although he was a bachelor, Bob Chandler was a major influence in the building of the first school. He collected money for a fund to hire a teacher and equip the school. This Moose Creek school, a one room log building with siding, was built on the northeast corner of McCormack's quarter. (This building has since been moved into the town, renovated, and become the home of Mike Holowaychuk Sr.) The school yard was fenced and a stile built so that drinking water for the students could be carried from Dunham's well. Poor roads and cold weather forced the school to close right after the Christmas concert every year. It reopened in March and classes carried on right through the summer. The first teacher, Miss Moody, in 1911, taught 25 or 26 pupils. She was followed by Mrs. Hugh Cinnamon and then R.K. Martin. The Davis girls, Hazel and Laura also taught in this school. 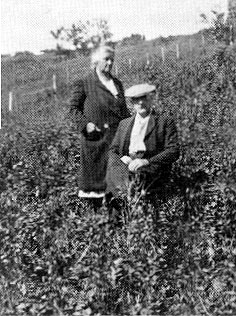