Ah, this is a bad month to be sitting back going on and on about the lucky people who are, have been, or are about to go on vacation. Some of the folks around here have had their vacation to the tune of wedding bells â lucky people â wish I could find out how those gals got the fellows to say "Yes".

At this time the lucky vacationers are Jack Williams and family, who are visiting relatives in Vancouver. Haven't heard from them, so they must be enjoying themselves. Howard Austin just returned from visiting friends and relatives at Neepawa, Brandon and Winnipeg.

Ron Seal and his family recently returned from visiting his brother in Winnipeg. He also had a tour of the Neepawa Works.

Edith Hodge ( Dairy Mill) made a flying trip to Vancouver. Edie says she had a very good holiday, but something was missing. We think she means Norman. Edie is the lucky gal who gets the ring at all the showers. The way the story goes, Edie should be getting a ring of her own soon. The lucky man? That's her secret.

Sheila Lorenson ( Dairy Mill) has returned this week from vacationing with her parents at Revelstoke, B.C.

Everybody is reporting back well tanned and in good spirits, which is a good indication of having had a good holiday.

It was with much regret that we said farewell to Tommy Melnyk, who worked in the office. Tommy is leaving for Uranium City in the near future.

Congratulations to Mr. and Mrs. Marvin Bartee on the birth of their daughter, Aug. 23rd, 1957. 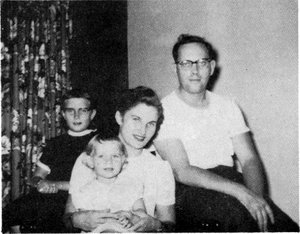 Mr. and Mrs. John Lewis (Steam Engineer), Patsy and Penny.
Missing from the picture is David, age 5. The Lewis family hail
from Red Deer and have just joined the "Salt Family" this
summer We hope they will enjoy our pretty little spot as much as we do.

A newcomer to the office is Herb Wyness who hails from The Townsite.

Newcomers in the plant are Arlene Wyness ( Herbie's spouse ), Charlie Burns, and George Anderson. Our pickling crew this season consists of Gordon Fakeley, Doris Sawchuk, and Doreen Burns (Maxwell) ). Doreen is an old hand up there, they tell me she used to work in the Dairy Mill before she became Mrs. Burns. Malcolm Bibby, who was with us last year, was back again this summer. Malcolm obtained university marks on his Grade 12 examination, and he is leaving this fall to study Engineering at the University of Alberta. We all wish him the best of luck. WHEN IT RAINS IT POURS â same holds true for showers. Two well-attended showers for two pretty young lasses were recently held at the local recreation building. Edith Hodge and Sheila Lorenson were hostesses att he shower held in honour of Henrietta Anderson, while Mrs. Edith Hodge and Sheila Lorenson were hostesses at the shower in honour of Arlene Jones. Both showers were well attended by the girls' many friends from Lindbergh, Elk Point, and district. The happy brides-to-be received many lovely gifts.

The company picnic attracted rain, as usual. Although it didn't exactly pour for most of the afternoon, it wasn't a very good day for taking pictures â result, no pictures.

However, the kiddies, big and little, did enjoy themselves playing ball, racing, eating ice cream, lots of pop, etc. etc. The picnic suddenly ended around 5.00 p.m. Ah, you are so right, a slight downpour. We hold a good record â for five consecutive years it has rained on our picnic day. Next year it won't, we hope.

Last issue I promised to let you know how our Queen candidate made out. As much as I'd like to forget about it, I'd better confess that we didn't prove to be such good salesmen after all. As Ken Sutton says, "We can't sell tickets, but we can sure sell salt." 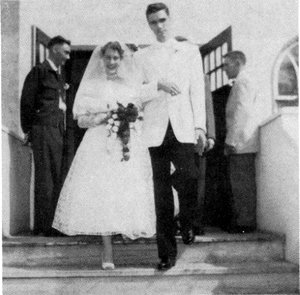 ANYBODY FOR TENNIS? We sure are, and our tennis court is progressing very favourable. Due to the fact that Frank Reintjes had to do most of the labour (and poor Frank did it all by himself ), the court is coming along very well. Although a few husky women went out to help Frank and Malcolm get a few truck loads of clay, unload, and try to spread it as evenly as possible, Frank didn't complain. We though he was afraid we'd up and leave him at it alone again. We are hoping to get in a game before this issue appears. That is, if we get that net and tapes in time.

Fishing at Whitney and surrounding lake is as good as it ever was â anything under three pounds gets thrown back. Anyone that wants good fishing, come on out to old A lberty.

Mrs. Oliver, who is still in Edmonton, was out visiting with us for the past week. We are sorry she has been ill for the past few months, but are hoping she will be able to move out here real soon.

We have recently been visited by two of our former chief engineers, namely Oliver and Mrs. Davidson, and J. B. and Mrs. Wright.

Since the last issue we have had a short visit from Jack Mair and Bert Ayres, also John Nimmo.

As I sit here going on about visitors, who should come bumping in but Roy McDannold from Neepawa. This is Roy's first visit to the plant, and Howard Austin is making sure that Roy enjoys every day here. We do hope that he'll remember all the good things about this part of the country, and none of the bad ones, not mentioning the roads, of course. By the time Roy gets back over our roads he'll be singing "Ah'm All Shook Up".

This morning, being busy as usual, I was about to greet a visitor, when I found it wasn't a visitor at all. On top of this figure sat a cap, and what a cap! It had blue and white triangles, and under it a rather nice looking young fellow, who insisted that the cap did something for him. What the cap does for him, I don't know, and I don't think anybody else knows. The chap under the cap was Hammy Oliver, chief engineer. Fine looking fellow, and a ???? looking cap. We are sorry to hear that Herb ( Slim) Hurlbert of the Edmonton offices is in hospital. Lost too much weight, Herb?

Our regrets are extended to the Seiler family, who lost their home in a recent fire.

The Elk Point United Church was the scene of a pretty wedding when Henrietta Anderson and Doug Keck were united in marriage. The wedding was followed by a reception at the recreation centre on the townsite. A dance was held at the Spring Park Hall. The happy couple have just returned from a honeymoon trip to the West Coast and parts of the U.S.A. They'll live in Elk Point.

Arlene Jones and Herb Wyness were recently married in the United Church at Elk Point. The wedding was followed by an open air reception at Whitney Lake and a dance was held at the Heinsburgh Hall. The happy couple will reside on the townsite.

Our Dogpatch on Parade float made quite a hit. We had the cutest little Mammy and Pappy, namely Vera Fakeley and Hammy Oliver; our Daisy Mae and Lil Abner ( Florence Sutton and Ken McGinnis) were a handsome pair, so like the comic strip; our 151/2 year old. Tiny was none other than Cal Cundliffe; Moonbeam McSwine ( Susan Peters) had a little trouble with her swine for a while. The poor little pig couldn't get used to Moonbeam, and Moonbeam couldn't get used to the unmannerly little @00%/c! pig. But the little beast put on a fine show after all â itsquealed and kicked enough to let the crowds know it was alive, and enough to give old Moonbeam a nice black arm. This sore arem convinced Moonbeam that the pig was no toy, but the real McCoy. Two more important fellows on our float were Marryin' Sam (Bess Anderson ) and little Honest Abe (Keith McGinnis ).

Judging from the cheers, squeals and laughter from the crowds as our float went by, we are proud to say that our "Dogpatch on Parade" was a real hit.

This is Dogpatch, Canada. Daisy Mae chats with an onlooker,
Mammy puts up her dukes, while Pappy is busy uncrating
Moonbeam's pig.

Pappy rests his back against the ? ? house, while Moonbeam McSwine tries to hold her own against the pig and the pipe. 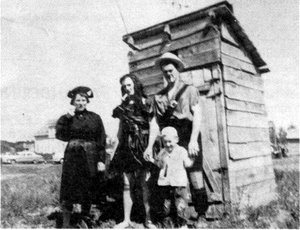 Mammy Yokum, Moonbeam, Lil Abner and Honest Abe, descend
from the float and pose against the charming pastoral scenery
of Elk Point.