LINDBERGH AT WORK AND AT PLAY

No sooner do we hang up the skates than down come the fishing rods. It seems that so far this season there have been quite some catches made. No one knows for sure who made them, or how big they were â Like the big one I caught last year, the bigger one that got away â as usual a nice big FISH ( story).

We do know for sure that Tom McLennan and his side kick, better known as Mike Buck ( a relate of father Buck of Bucks cozy korner ) really did go fishing at French Bay.

We also know for sure that they got a good supply of fish as Tom really doesn't care for cleaning fish, and we've heard some complaints like "Gotta clean those g! ??? fish, wish I could go to Heinsburg instead". Good girl Steffie (Tom's spouse). You catchem, you cleanum.

I seem to recall another fishing trip that was planned for the long week-end. George Krissa was all excited about this one; all those big fish he was going to catch at "Worm Lake".

Well, we did hear a lot about the trip before George left, and it's a good thing George was in such good Spirits before he left. You see, since he got back from getting his proposed "Big Catch" I haven't heard a word from George. I did hear him whispering to someone that he didn't even get a bite.

LINDBERGH HAS A CARNIVAL QUEEN? Ah, yes, and a beauty she is too. The lucky people who already received tickets to sell will know that Elk Point is celebrating their 50th Anniversary this June. Our Club is sponsoring a queen, namely Hennrietta Anderson (Dairy Mill). So far we have only heard a hint that our fair lady is ahead and we do hope she stays there. The committee, Cavin Cundliffe, Tom Melnyk and myself say many thanks to those who so kindly helped our candidate get ahead by buying tickets. Next issue will tell who won.

We are happy to see that Faye Anderson is back from Edmonton where she was hospitalized for a short period.

It is being whispered about that Herb Wyness ( Bagger ) is going to be pledging the vows in August â That right Herb?

Dough Keck (loader) has recently purchased a house in Elk Point. Henrietta seems in a rush to get a lot of painting done fast. Could it be that the day will come sooner than we think???

We welcome back Hammy Oliver who has returned to take over his old duty as Chief Engineer. Hammy and Mrs. Oliver were surely missed by all and are we glad they're back.

Mr. Ayres again visited the plant, and again the kipper roast which he's been waiting for was turned down. If he drops in on us again this summer I feel certain we can rustle up some kippers. (Note to H. Ayres: Pauline's freezer quit on us and resulted in bad kippers. However, we shall have some more soon. I hope.)

Herb Hurlbert of Edmonton office recently visited us. As this was his first visit to Lindbergh, he was shown around properly. Toured the plant, Heinsberg, etc. etc. Herb seemed to enjoy the Dairy Mill. Would you mind telling us why Herb??

The fortunate ones who have had their holidays so far are Ray Hammond, Joe Lacrosse, and Tom Lungul. And say, do we like those Travel Pak's! 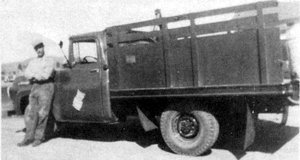 FAREWELLS were said to Donald Wenzel formerly in the Bagging-Loading Department, Mrs. Sheila Lorenson (Dairy Mill) was hostess at a farewell party where Donald was presented with a Club Bag from the Windsor Club and Local 474.

George Krissa is now sitting in a lovely little new office. The addition is quite an improvement. This little structure seems to resemble a watch tower slightly more than an office, however. Due to the cold office he had, the new building was built "higher up" so George won't freeze his toes in the winter when the boys are loading. Below the floor of his office is quite a large storage space and though it seems odd to some of us, it is quite a space saver.

For some time now I've been wanting to send you a picture of our new office. Ron Seal (Maintenance Foreman) seems to think we should wait until the lawn is up so it will make a better picture. Well I'll go along with this and I'm not too impatient, but that lawn has been seeded for a good long while now, the sprinkler going all day and every day and, oh, you should see the beautiful weeds! Ron says it's a bad year for lawns. Quote ( J. D. Williams) "Any year is a good year for lawns, I have a beautiful lawn started". Unquote.

We wish to extend our deepest sympathy to: 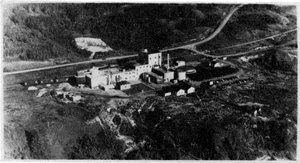 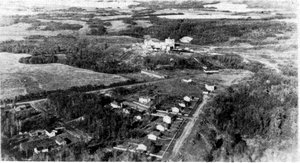