Construction in Lindbergh had certainly accelerated this summer in comparison to the summers past.

We may now boast that our three evaporators, two of which have been newly acquired, can produce a larger than anticipated output of approximately 400 tons per day of vacuum salt. With the addition of these two evaporators, the pan room has taken on an entirely different appearance.

Before the third effect evaporator would be installed it was necessary to extend our pan room a length of 20 feet to accommodate it. In adding this extension vantile and styrofoam were utilized to continue to change the plant to the modern look of the fuse plant which had been constructed in 1967. All that remains to be face lifted is the original warehouse extension between the two departments.

The third effect evaporator resulted in an installation of a completely new fiberglas condenser. In installing these two major pieces of equipment (condenser and evaporator), it was then possible to run the existing second effect evaporator and the new third effect evaporator with moderations to the steam piping as a double effect as in the past with the future third effect (new evaporator) employed as the second effect. While salt was being produced with the above arrangement, the first effect evaporator which had served faithfully and beyond its limitations, was being dismantled piece by piece to allow for installation of new evaporator in its place. The rotary cooler-dryer was dismantled allowing a new jet zone cooler to take its place. New screw conveyors and a bucket elevator were installed to convey the vacuum salt to and from our new conditioning silo which requires final touching up at this time before being put into operation. 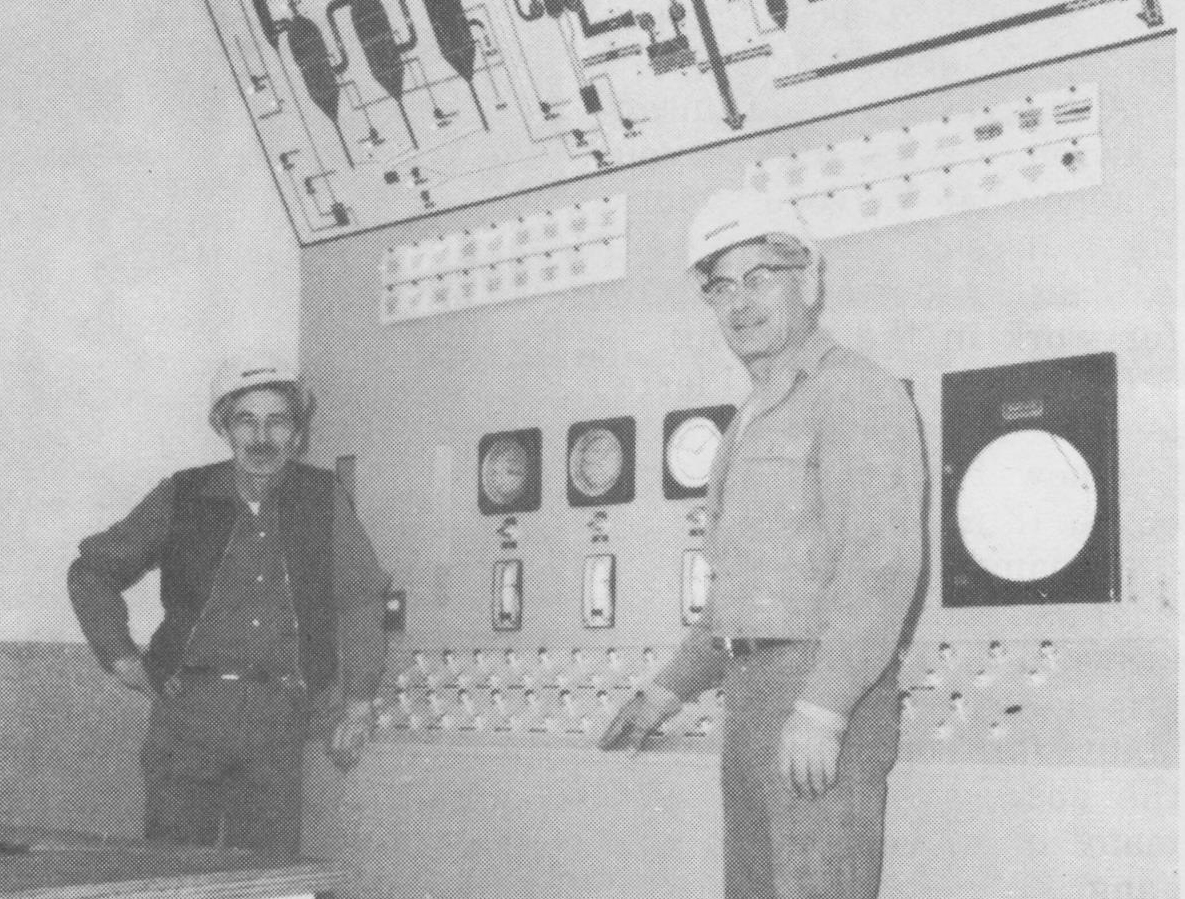 Fred McAleese, left, and George Krissa in the control room  at Lindbergh. 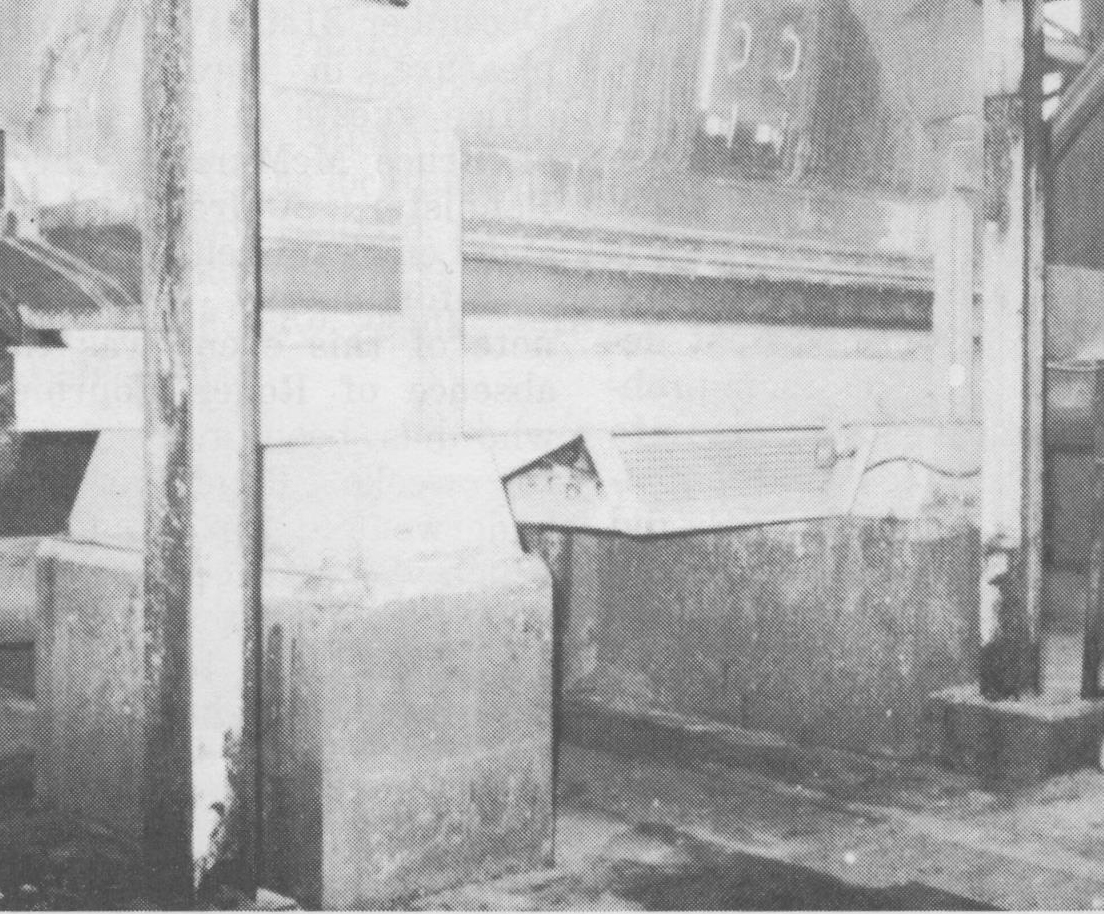 The rotary cooler-dryer at Lindbergh.

In completing and changing over the temporary double effect evaporation to the new triple effect evaporator, our filter experienced a much needed change by installing a filter air heater which dries the salt by introducing hot air from the bottom of the filter drum instead of the top as in the past.

In adding more equipment in the pan room more dust collection equipment was required as well as revamping of the existing equipment. Two new dust collection of systems have been installed to accommodate the jet zone cooler and the conditioning silo systems.

By installing additional equipment and modernizing existing equipment, it would not be just if the control system and environment were not brought up to date. The new control room is now air conditioned and displays a modern schematic flow pan complete with activated lights conveying the operation by the equipment to the evaporator operator.

The Maintenance boys at Regina marked up this cartoon when they heard that Vlad Baranowicz had been transferred to Lindbergh as Plant Engineer. Vlad's comments "Every place has its advantages". We are sorry that Vlad will be leaving Regina but wish him every success in his new assignment. In all fairness to Lindbergh, Regina modestly admits that southern Saskatchewan isn't exactly in the tropics either. 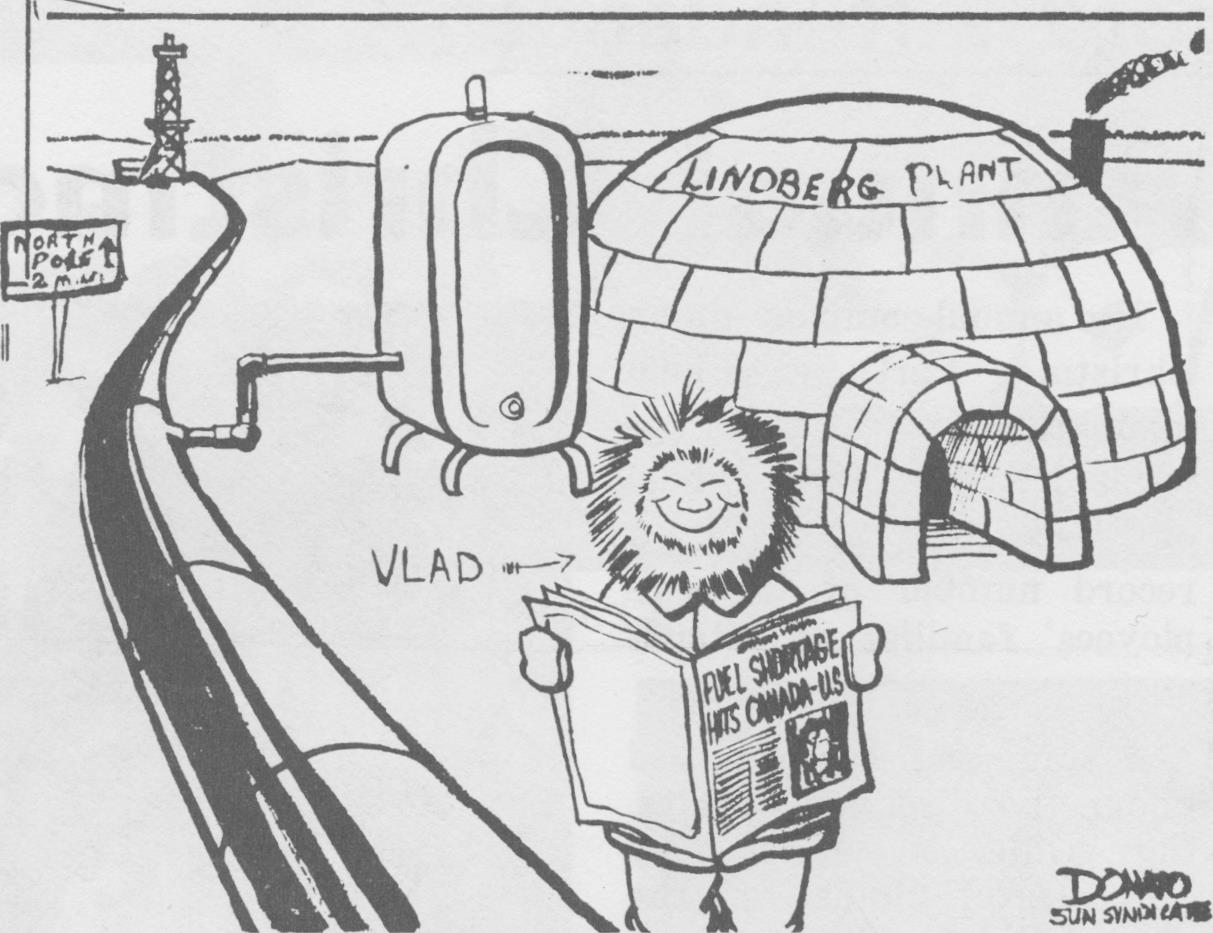 "Every place has it advantages"