CONGRATULATIONS to Ray Hammond, Fused Plant Operator on his marriage to Miss Natalie Terre of St. Paul. The happy couple were married on October 12th and are residing in Elk Point.

WE ALSO EXTEND CONGRATULATIONS AND BEST WISHES for a long and happy married life to Sheila Wenzel and Ronnie Lorenson who were married September 30th. Sheila is one of our packaging gals and Ronnie is a temporary employee at the plant.

A FAREWELL PARTY was held for Twe Horton, Payroll Clerk, in Heinsberg at which time he was presented with a very fitting gift â an alarm clock. Twe left to take up work in Edmonton.

NEWCOMERS TO THE TOWNSITE are Mrs. Oliver, wife of our Chief Engineer and granddaughter Heather. Mr. and Mrs. Ed. Gagnon and daughters Denise, Laura, Jeannette and Son Tommy have recently arrived to take up residence too!

PLANT EMPLOYEES were some puzzled one Thursday evening in September to see the newly arrived construction Foreman driving two nails into the side of the Plant. Seems said Foreman is a bit leery about starting a job on Fridayâ hardly a bit superstitious is he!

THE FIRST SNOWFALL OF THE SEASON brought out all our would-be hunters. After toting their guns for miles seems all they came back with was cold feet. Also hear they got themselves lost. Better get a compass boys!

SPEAKING OF HUNTING â we've been promised a duck dinner by our newest nimrod himself â none other than H. E. Sills â How's it going? I'm getting mighty hungry !

THE WELCOME MAT WAS ROLLED OUT for Norm Hobson, Bert Ayres, Jack Mair and Don Lumby recently. Seems the sun had hardly set before our nimrods were up and at 'em! The ducks were playing it real cagey, however â but I still don't think it's fair â 3 great big guys after one little duck! We must give credit where credit is due, however, and say that we did have several duck dinners â one cooked by Norm Hobson himself.

Heard that one of our local nimrods bagged seven ducks with one shot. Pretty good average I'd say! 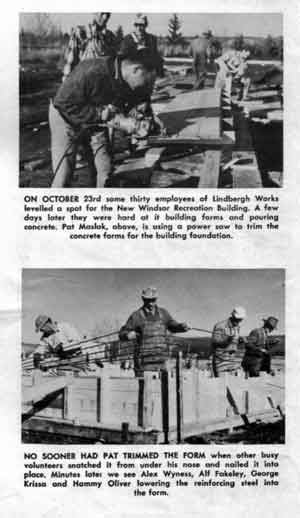