Vermilion was the nearest centre for purchasing supplies and necessities. This trip, by way of Hopkins ferry west of Elk Point, took four days one way, so shopping trips were not made often.

A doctor was available at Vermilion too. When he was needed, one must first wire money to Vermilion, then meet the doctor at the river and transport him to the patient. It's fortunate that our pioneers were a hardy lot and didn't require medical attention very often.

The need for a ferry nearby was urgent so the homesteaders worked long hours to build a road down to the river. This road work was done almost exclusively by oxen. Men were proud of their oxen and their ability to handle these beasts. One day when Louie DeDelly was plowing for the road on the south side of the river with his oxen "Pull me Leon", one bull began to bellow and refused to work.' AIex Taylor started giving advice as to how to make this ox work but Louie "ran him off" with a shovel. Work went on. Bob Chandler's team, Pie and Connie, did their share. Much work was done all through the district by Art Gordon's "team" of one ox, one milk cow and his pinto saddle pony. 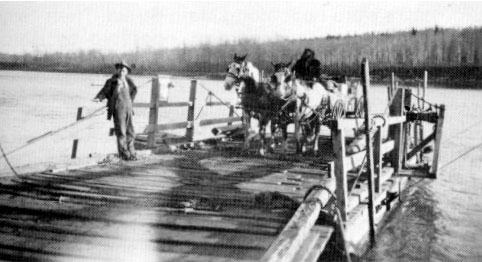 Mr S McClain crossing the river on the Mooswa Ferry

Freighting into the area was also done by oxen, Often. in summer, the flies were so bad that the frantic oxen would become unmanageable. They might run headlong into a slough and lie down to get relief from the biting insects. Sometimes the drivers would camp during the heat of the day and travel at night instead.

The road to the river was completed and the ferry was installed soon after 1910. The first ferryman was "Dad" Chilbeck. He had come down the river on a scow, bringing his family, some roofing and other building mareials with him. His sons Art and Willis took homesteads too. His son-in-law walt Soper, was the second ferryman.