The history of the Mooswa, now Lindbergh, district could have been best told by Bob Chandler. He was an ex R.C.M.P. and lived on his homestead, known as Coyote's Rest, from 1906 until his death in 1953. Bob had many interesting tales to tell of the early days before the settlers came. One such story deals with two trappers who shared a little shack a quarter of a mile east of Lindbergh, about 1904. That winter supplies were extremely scarce and it is believed, though never proved, that one of these men murdered his partner so he could survive on the few groceries they had. The grave of the unfortunate trapper may still be found on the sand plains above Lindbergh, near the edge of the jack pines, not far from the road today.

Rex Hatchard moved to the district in 1907 and filed on the quarter section of land where Neil Nelson lives today. Rex's family followed him in 1908, consisting of his wife and five children. A son, Burrell, was born in 1911 and he was the first baby boy born in this area. Rex's first breaking outfit was a little team of mules, a black saddle horse and a Jersey bull, with a twelve inch walking plough.

Tyrol, the first post office in the area, was located in Maxwell's house. The 'Mac' Stewart Maxwell family had moved onto their homestead, later known as Tom Johnson's place, in 1909. The Tyrol post office was opened the following year. 'Mac' had a blacksmith shop and was the ferry man later on. In 1911 the post office was moved to the site of the Moose Creek Telegraph Station, the present Salt Plant site, and the name became Mooswa. 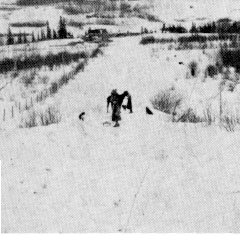 This telegraph station had been there for some years. George Mann operated it in 1908 but he was not the first operator. It was taken over by John McCartney in 1910 or 1911, and by Art Bowtell some two years later. Art Bowtell became a prominent businessman of the district, buying and selling horses, furs, etc. He is now (1974) living in Beaverlodge, Alberta. 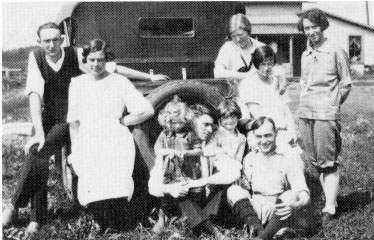