Once again the Lindbergh Club held a successful mixed bonspiel, which were five busy fun packed days. With 26 rinks entered in the spiel, the ladies were kept busy in the booth and between curling and working were home baking pies and making soup. The ladies operated the booth during the busy days in their usual well organized manner.

Again this year we saw many thrilling games. Some were so interesting that it was hard for the office staff to stay at work. Most of the games the writer was able to watch, were real close, with many games being won by the last rock. Then I recall seeing a real thrilling game, at least it was thrilling until the 9th end, when a seven ender was laid. This of course took away some of the thrills the game held, for Jack and Bea Williams, as they were on the wrong end of the seven ender. But the rink that laid the big end on them won the prize for the biggest end. There were three six enders and one seven ender throughout the bonspiel.

Five of the local rinks managed to keep some of the prizes home and nine went to Elk Point and Heinsburg. We are waiting for the time when the Grande Challenge stays home. The banquet was held on the Friday night. As we still have the same good cooks we've always had, I needn't mention that the banquet was a huge success. The banquet was organized by Irene Anderson, Bea Williams and Lily Seal and I might add, well organized. Ladies serving were, Loreen Hardy, Hennie Reintjes and Vera Fakeley.

The prizes were won by the following rinks:

We attribute the annual success of our bonspiel to the good ice; efficient caretakers, on the job all the time (never been behind schedule more than 1/2 hr. and then very rarely.) ; the good organization of the club in running spiel, booth and banquet; exceptionally good prizes, and of course it's the only spiel of its kind in this area. We are glad that our fourth annual spiel was as huge a success as the first three. 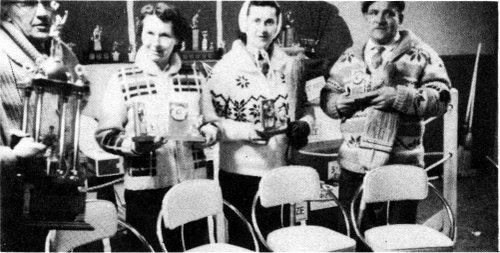 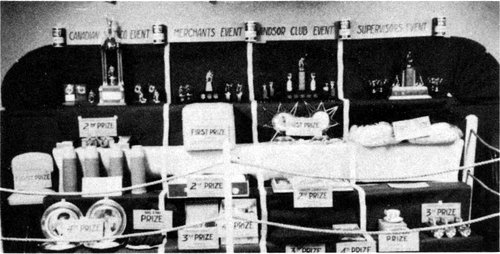 2. Second prize winners in the Supervisors event, a local rink, Bob Lorenson, Maude Krissa, and George Krissa, (missing is Rhoda Lorenson) Hammy Oliver was not a sub, he just made the presentation.

presentation. This rink is a local rink. Thanks for keeping one trophy home. 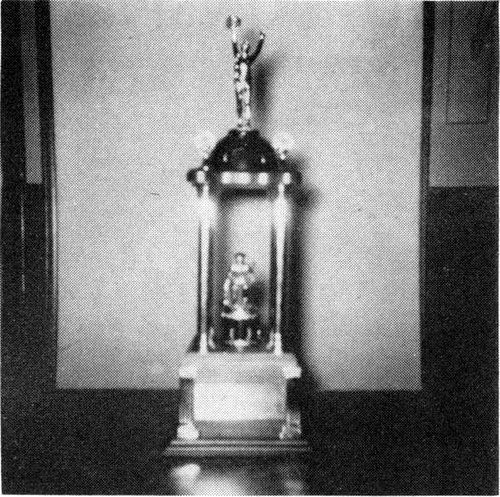 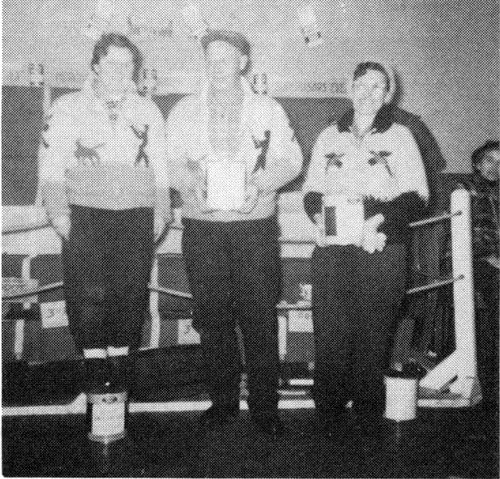 Fourth prize winners in the Supervisors
event, still another local rink. Standing on
her prize, is Edith Hodge, Norman Young,
and Lydia Young. Missing from picture is
Lydia's spouse Tom. 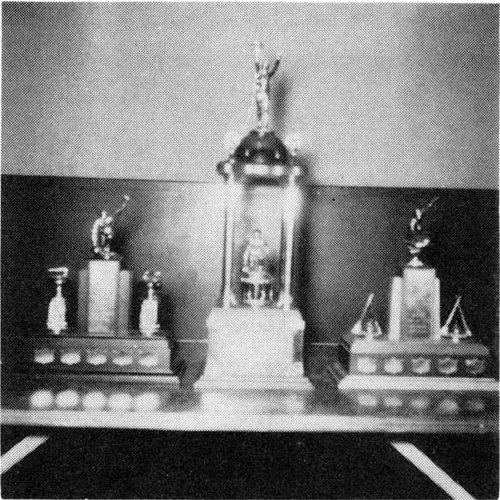 The 1958-9 hockey season will long be remembered by the Lindbergh fans ( curse the luck) as a year of progress???

Yes, for the first time since the fair city of Lindbergh's existence there was a team in League Play. The Lindbergh Dynamos were off to a shakey start, being beaten six times in quick succession, but roared back with a surge of power to trounce Elk Point, seven to four.

A few nights later we were edged fourteen to nothing by the Bonnyville Club. When the season finished up we were neck and neck with Elk Point, both teams being tied for last place.

The purpose of our entering a team in the Beaver Valley Hockey League was to encourage the junior team in this grand sport, we being a rung in the ladder (Lindbergh Dynamos to N.H.L.) , but with an ending like ours did we encourage or disappoint the youngsters?? 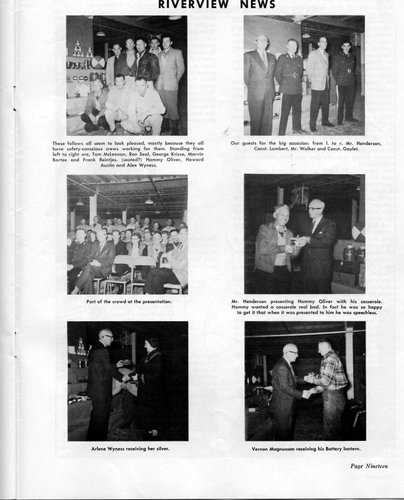 We at Lindbergh were successful in obtaining our fourth safety objective, The Board of Directors Award. Presentation of the awards took place in the Dairy Mill where a display of the awards was set up for the occasion. Awards chosen were hassocks, electric coffee pots, corn poppers, lamps, silverware, thermos jugs, wallets, clocks, casserole, tool boxes, heating pads, battery lanterns, saws, planes, wrenches and axes.

Mr. David Walker, Mr. Henderson, Safety Director of the Workmens Compensation Board, Const. Lambert and Const. Goulet of St. Paul were on hand for the presentation.

Mr. Henderson, before presenting the awards, congratulated employees on a fine record. We surely are proud of this record and of the fellows who work in the plant who contribute the most effort in this cause. We do hope to keep the record we have established, as we are now leading the safety parade for the company as well as the province of Alberta.

We were favoured with a visit from our Editor; seems like he's slipping a little, didn't get out to curl. However, we feel certain he curled as well behind the glass as anyone there, and trust he enjoyed his stay with us as much as we enjoyed having him. He flew out from Saskatoon with Mayor Scharf.

Fred ( speedin) McAleese was in his usual hurry to get home from work one morning and found out his little red truck could really roll. Not quite like he intended it tho'. However, it was lucky for his passenger, Ken McGinnis, that he was able to hang on to the seat when the door on the passenger's side opened. Fortunately neither of the fellows were injured, and lucky for you, Fred, that you didn't roll your truck in Cundliff's Creek. Ron Seal nearly hit Cundliff's Creek Bridge the other day and I overheard Cal giving him a severe reprimand.

Some lucky fellows around here are the proud owners of shining new cars.

Ken McGinnis a 1959 Impala Chevvy, "Glad its not a Plymouth".

Maybe by next year there will only be one Plymouth on the lot, namely Ron Seal's.

The local hockey club sponsored a successful Amateur Hour and dance on February 27th. Local winners were Faye and Burton Anderson, who won second prize and Henry Loren- son, third. We are glad to report that this effort was an all around success. Music for the dance was supplied by the local masters, Cal Cundliffe, Herb Sutton, Walter Sarenchuk and Jimmy Draper.

We extend a warm welcome to (Mrs.) Lydia Young who joined the staff on the packaging crew recently. Congratulations to Mr and Mrs. Frank Kerklaan on the birth of their baby boy.

We wish to extend our deepest sympathy to Johnny Zaraska, on the recent death of his mother.

We're sorry to hear Mrs. Oliver will be hospitalized in Edmonton. Hope to see you back and well soon.

Seems like the lady curlers brought home more prizes from outside bonspiels than the men did. Three of the local ladies' rinks were in

competition at Elk Point and two came back with prizes.

A week later the same rinks went to Heinsburg and brought back still more prizes. Alice Young's rink had Donna Stults in place of yours truly, playing in Heinsburg.

What did our men curlers do??? They entered a few spiels but . . . George Krissa, Fred Frisby, Henry and Bob Lorenson were the only rink that brought back a prize from Heinsburg. None of the rinks entered in Elk Point spiel came back other than empty handed.

Some of our curlers, being farmers, were able to enter the farmers spiel in Elk Point and Fred Frisby, Leonard Young, Bruce Young and Fred Johnson came home with 150 chicks ( not girls) each.

The Canadian Salt Co. Trophy in Elk Point was won by an Elk Point rink who's third was Jack Williams. At least part of the trophy came here.

Our Round Robin battle was completed after the annual spiel and the trophy winners are the following:â

The Boobie Prize went to the Carl Nelson rink.

After the Round Robin playoffs were over, the ice was still as good as ever, thanks to ice makers George Krissa and Alex Wyness, so we had a club bonspiel with the following results:-

Our curling over for another season, left some reluctant to put away the old broom and some of us quite anxious. To wind up the curling for the past season, a party was held in the curling rink at which time the trophies were handed to the Lucky winners.

So delighted were we to see the handiwork of keen-eyed cartoonist Elmer Bjorstad back again, that we decided to give him 2 full pages in this issue! Hope you get as much of a kick out of them as we did. Ed.

The Demise of Heinsburg Hotel (and its bar) 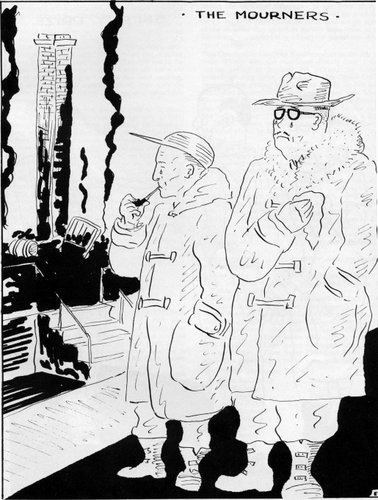 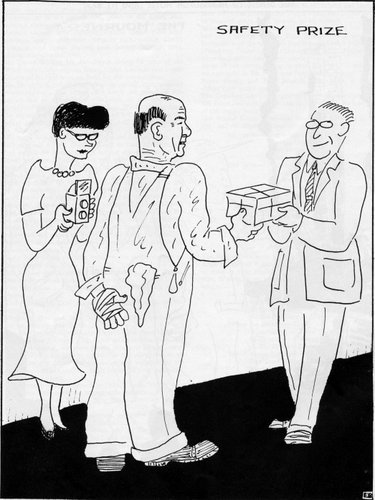