A young man, Ernest D. Schulz, has given over the past years much of his time and understanding to help others as he could. The Canadian west has much wide open space broken here and there by an isolated community. It was to these outlying posts that Ernie travelled on numerous occasions to lead congregations in religious service. As of February 15 he terminated his employ of nine and a half years with our company to devote himself fully to his vocation. Ernest will be leaving with the Janz Brothers for Germany where they will undertake missionary work.

A farwell party in honour of Mr. Schulz was held at the home of Mr. & Mrs. John Williams. The staff decided that Ernie would make good use of a handy leather briefcase and the Windsor Goodwill Fund presented him with a Timex men's electric calendar wristwatch.

To Mr. Schulz, all our best wishes in his noble work abroad.

FUSE PLANT APPOINTMENT Congratulations to Alvin R. Meger on his recent appointment as Fuse Plant Supervisor. Alvin has worked in various capacities in the main plant since joining the company in 1954. He lives in Heinsburg with his wife and their five sons. The Fuse Plant Supervisor's position was formerly held by Marvin Bartee who has moved to Edmonton.

We welcome Joanne Dacyk and June Strain to the Lindbergh office staff, and to the plant staff messrs. John McCormick, Peter Stafford, and Del Smith.

Hello and best wishes to the brides of Don Rae (February 28) and Mike Pelech (March 14). Congratulations to the fellows.

CURLING SEASON ONE BIG SWEEP The Windsor Club's 10 mixed rinks had another excellent year of curling. The men held the first opening bonspiel of which Jim Rylance was the winner. In the women's spiel, 12 rinks competed for top honours and Virginia Pankiw's rink won the Grand Challenge. Sheila Manning of St. Paul took the second event and Carrie Mazepa of Heinsburg the third.

With a twitch of his moustache and a touch of the hat, the George Krissa rink took the 1969 Windsor Club Mixed Spiel. Lead Joan Palamarek, Second Ken Palamarek, and Third Georgina Morris shared the prizes with their Skip. Two tri-lite lamps and two battery-operated wall clocks as well as the trophies were donated by CSCL. Second event went to John Zayonce; third to Ray Helquist, and fourth to Jim Rylance.

As a point of note, Mr. Krissa has been trying for the past 14 years to get his name on the trophy. This year he finally did it. George also walked away with the most wins in the Round Robin for the year. The practiced draw-shots paid off and won several crucial games. Bill Pacholek placed second here with M. Lorenson and T. Magnusson coming in third and fourth respectively.

The Interplant tournament brought together the Lindbergh Masters and the Neepawa crew. Under the direction of Skip Alex Wyness and Coach Tom McLennan, the visitors were defeated quite handily â not only on the ice, but were outclassed at the refreshment booth, too. Both teams and the cheering section lunched at the Staff House most deliciously and in the evening feasted again on turkey at a banquet prepared by the townsite ladies.

For a little added sport, 4 rinks were drawn from the curlers present that evening and competition for the Martin O'Day Trophy commenced. Virginia Pankiw's rink with Lilly Seal, Ken Palamarek and Howard Austin proved the best team defeating Mery Buchanan in the finals.

All in all, a most winning season for Lindbergh. 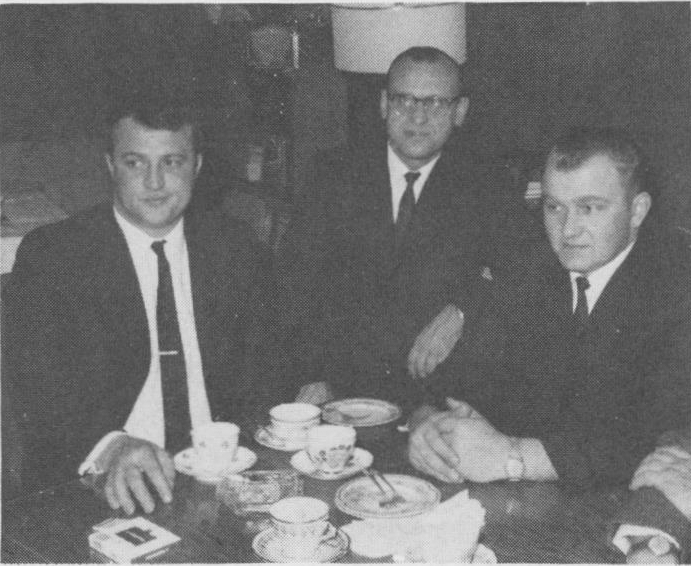 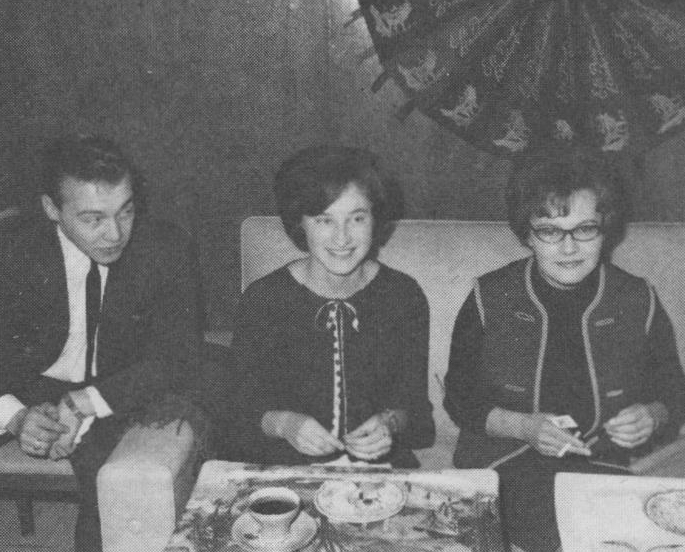 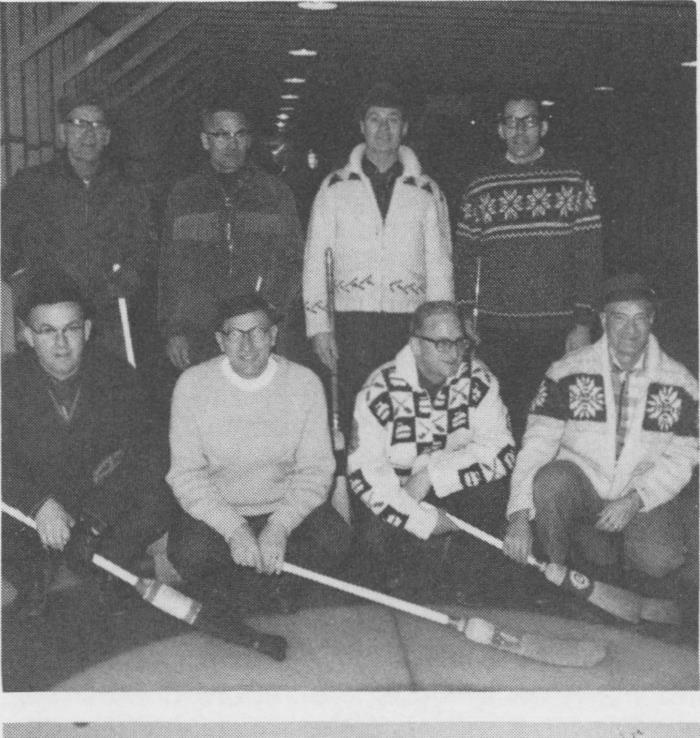 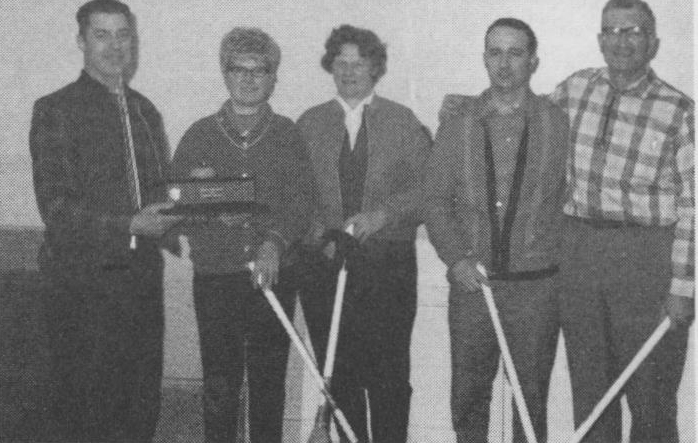 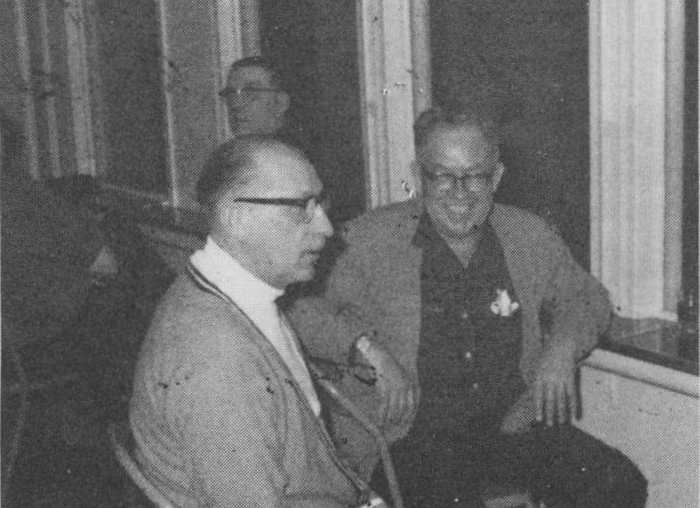 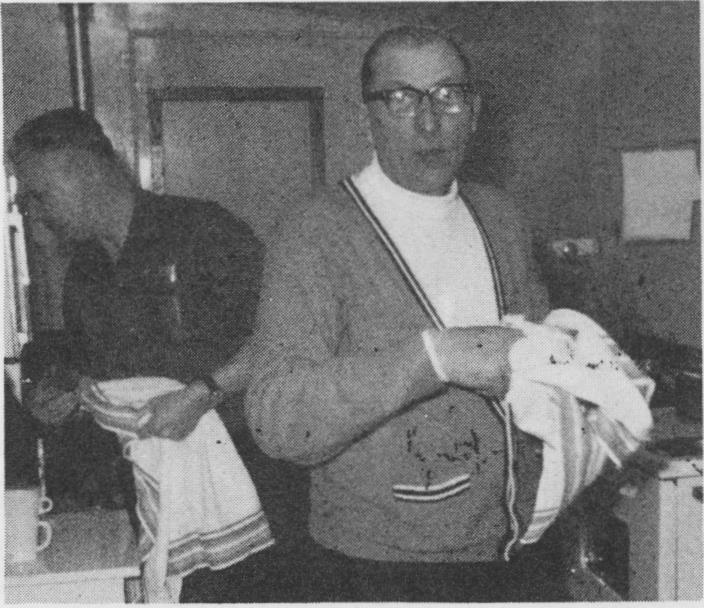