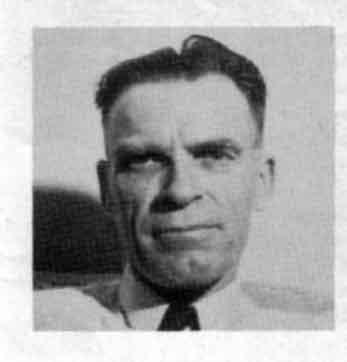 Alex was born in Peterhead, Scotland, and came to Canada when he was two. He was brought up in the Peace River country, and his first business venture was in barbering. He opened shop in 1933, figuring that, depression or no, human hair, being one of God's gifts, would always flourish. In 1937, a fire consumed his shop, and he decided to head North.

Alex worked for some years with the Hudson's Bay McKenzie River Transport system, meanwhile keeping in his hand at barbering. In 1942, he joined the Salt Plant at Waterways, Alberta. The company was just installing two new vacuum pans and dismantling two grainer pans, and Alex worked on these projects. After that he learned all the phases of processing and became Evaporator Operator.

While in Waterways, Alex built his own log cabin, and when the little Wyness's began to arrive (he was married by this time) he sold it and built a good sized log house.

In November, 1947, Alex started with the new Alberta Salt Company in Lindbergh, and he worked on the construction and installation of our present plant. With his previous experience in salt processing, he was called on to instruct all the original operators in all phases of production and processing.

Today Alex is Shipping and Processing Supervisor at Lindbergh, where his ever-ready grin and jokes act like a tonic to all who meet him: He enjoys curling, and was skipper of the Salt Plant team for two seasons. Gardening is also one of his hobbies, and we understand he plants according to the position of the moon. He claims this system assures a good cropâand to prove it, he not only raises a garden, but has  six children !

Alex still finds time to practise barbering and the male residents on the company townsite claim that a city haircut at twice the price cannot compete with Alex's job. 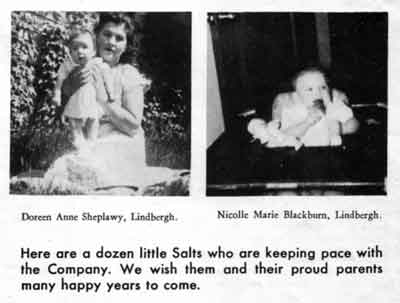 To the folks at Windsor and Neepawa works, the coming of April signifies the completion of their first year The Canadian Salt Company Limited. The folks at Lindbergh works completed their first year in C. S. Co. on January 1st, 1952. The Company's first annual report will also have been issued before this issue of "Windsor Salt Licks" goes to press, and it therefore seems appropriate to make this number something a little specialâa ''first anniversary'' issue.

With the âbeeâ of first birthday anniversaries buzzing in the editorial bonnet we have attempted to assemble in these pages the pictures of all the junior members of C. S. Co. families who will celebrate their first birthday anniversary in 1952. We know, however, that some pictures are yet to come. Our correspondents do their best on the assignments given them, but this time we gave them a hard one. There will be a few more juniors appearing in the next issue. 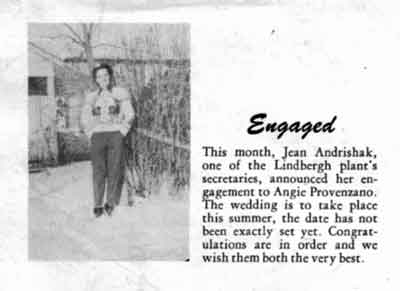 The Company's first Annual Report is, at this writing, just off the press. It reveals that the company had a moderately successful year in 1951. The words with which our president, Mr. H. R. Milner concluded the report are quoted here because they are a message to all of us.

"During 1951 the personnel of the Company was under very considerable strain. Old and valued associations were severed. An organization had to be set up. Problems incidental to the new situation had to be solved. Throughout there was the utmost goodwill and your Directors would like to take this opportunity of recording their appreciation of the service of an able and loyal staff.â

It was good to hear the announcement on 18th March that our Company has obtained an option on 100 acres of Canadian Steel Company property at Windsor for the purpose of test drilling in order to determine the possibilities of mining salt in this area. Drilling is now underway, and we shall have a short story on this operation in the next issue.