On October 31, 1970, Mike Sheplawy, Lindbergh Pan Operator, worked his last shift. The day climaxed twenty-two years and two months of loyal and conscientious service, having not missed one shift during his term of employment with Canadian Salt. We would like to congratulate Mike on attaining this apex of uninterrupted service.

Mike Sheplawy commenced employment with the company on Sept. 1, 1948, as a pan operator's helper and was promoted to pan operator on Aug. 1, 1953. During the first years of production at Lindbergh, it was a common occurence for the roads to drift in during the winter months, making travel by car impossible and it was during this time that Mike would start out from his home ten miles from the plant and walk to work, leaving about four o'clock in the morning to arrive for work at eight o'clock.

Mike was presented with a rocking chair by the Windsor Club and a set of stainless st cutlery and travel clock by the Internatioi Chemical Workers' Union, Local 474, on retirement.

We at Canadian Salt, Lindbergh, would like to wish Mike and his wife, Anne, a long and happy retirement.

Thirty years ago on October 21st, 1940, Howard Austin reported to work at the construction site of the new Salt Plant at Neepawa. It was a big day being his first steady job since high school. A year later on November 9th, 1941, he married Aileen. They have one daughter Leslie, who is now married and living in Edmonton, and one grandson Lyle.

A year ago in October, 1969, Howard was transferred to Regina Works to share in the start of our new plant at Belle Plaine, Saskatchewan. Howard and Aileen purchased a new comfortable mobile home and moved to Moose Jaw. Looking ahead eight years to retirement he doesn't wa to become too permanent one spot.

Howard says he has enjoyed his work with the Canadian Salt Company and believes if a man has to complain about his job he should find a new one. He is very knowledgeable man a finds it easy to converse almost any topic.

The Elk Point Gold and Country Club was the site of the first annual golf tournament featuring Canadian Salt's Alberta Sales and Distribution Staff and the Lindbergh Works Office Staff and Production Supervisors. The occasion was held on October 2, 1970, and included the tournament, a steak supper at the Lindbergh Works Staff House following the tournament and an evening of shuffleboard and cards at the Windsor Club. Bob Lorenson, Lindbergh Fuse Salt Supervisor, was declared the winner of the golf tournament and was presented with a trophy as proof of his supreme golfing ability. A very enjoyable time was had by all.

Visitors to the plant during October included Jack Mair and Allan Clark, who enjoyed a few days of hunting in the surrounding area. They report bagging twenty-two ducks during their stay. Nice going fellows.

We would like to congratulate Ken Palamarek on receiving his private pilot's license. Ken and five others spent the summer months taking flying instruction at Canadian Forces Base, Cold Lake.

Congratulations to Ken Palamarek and Deanna Fakeley on receiving their instructor's certificate in First Aid. They were recently presented with their certificates after taking a week's course at the St. John's Ambulance Headquarters in Edmonton. Courses in First Aid will be conducted at the Lindbergh Plant this winter, where Ken and Deanna's instruction ability will be put to good use.

The first of what is slated to be an annual golf tournament between sales, production and distribution was held October 2 at the Elk Point Golf & Country Club adjacent to the Lindbergh plant.

Being the first of what we hope to be many successful and very enjoyable get togethers it would only be appropriate for a brand new golfer to win a brand new tournament. On working out the scores on the Calloway system, this was accomplished by Bob Lorenson of Lindbergh works who has never played the game of golf before and came in with a net score of 72. Congratulations Bob maybe y o u should take the game up seriously and join the rest of the "duffers.â 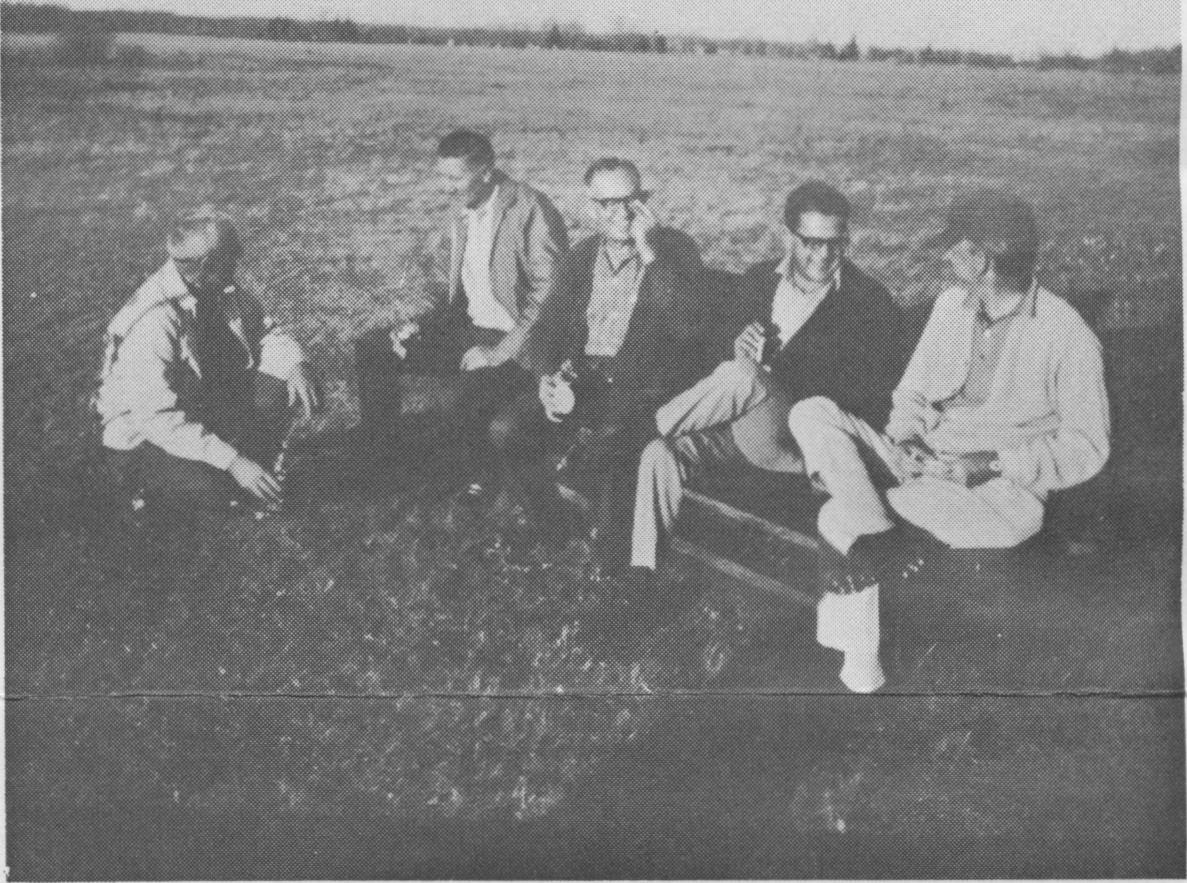 The trophy to be up for annual competition will gather dust at Lindbergh till the grass is green again next year.

The weather cooperated with a perfect day for golf and John Williams and staff at Lindbergh are to be congratulated on their wonderful hospitality.