This spring the Lindbergh Office has welcomed three new people to our staff. Among our new staff members is Mrs. Phyllis Labiuk. Phyllis comes to us from Kitscoty, Alberta where she was employed as a steno for the County Office. She will be training on the Billing Machine along with her other clerical duties. After office hours Phyllis keeps busy helping her husband Henry with the farm in Heinsburg where they live with their six year old son.

Emil Mudryk is now working in our accounting department. Emil was previously employed as Town Administrator for the town of Elk Point. Emil is very active in community projects and is a real asset to our Company. In his spare time he enjoys golfing, painting, gardening and all sports. Emil, his wife, Virginia, and their four children reside in Elk Point.

Rick Reinhart is our third addition. Rick has been hired as an Engineering Assistant for the summer months. Rick will be going back to the university to complete his final year in mining engineering.

Some of the newer employees of Lindbergh Works had the pleasure of meeting W. D. Mahaffy and J. D. Mair on their recent visit to Lindbergh. Mr. Mahaffy presented John Williams with his 25 year pin and gold watch during their visit. John joined the Company July 1, 1950 and has been Works Manager at Lindbergh for 19 years. Congratulations. John !

Two ten year pins were awarded in May. Lloyd Jenner, Fused Operator, completed ten years of service with the Company on May 12, 1975.

Marshal Pelech also completed ten years with the Company on May 17, 1975. Marshal is an Engineer in the power plant.

Congratulations to you both !! 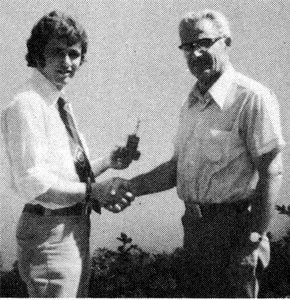 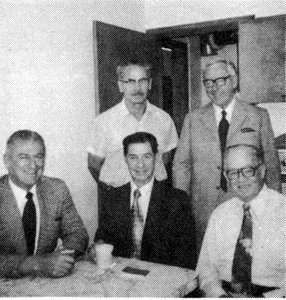 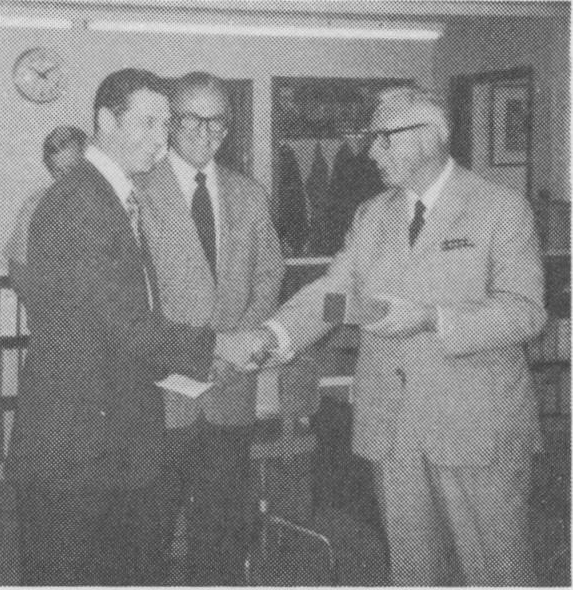 Tom McLennan, Works Accountant, was guest of honor at a dinner party with 17 men honoring him. Among the men present were the Lindbergh Plant Supervisors, Lindbergh Office Staff and John Williams, Works Manager, Lindbergh ; John Nimmo and Mac Thomas of Head Office ; Don Lumby, Reg Hooper and Cliff Porter of Edmonton. Tom was presented with an engraved silver tray. After having dinner at the Golden Dragon restaurant in St. Paul the men all gathered at John William's home for an evening of fellowship. 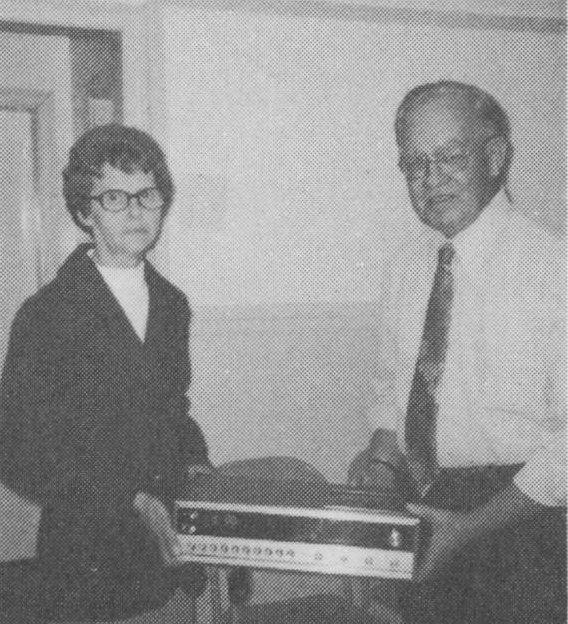 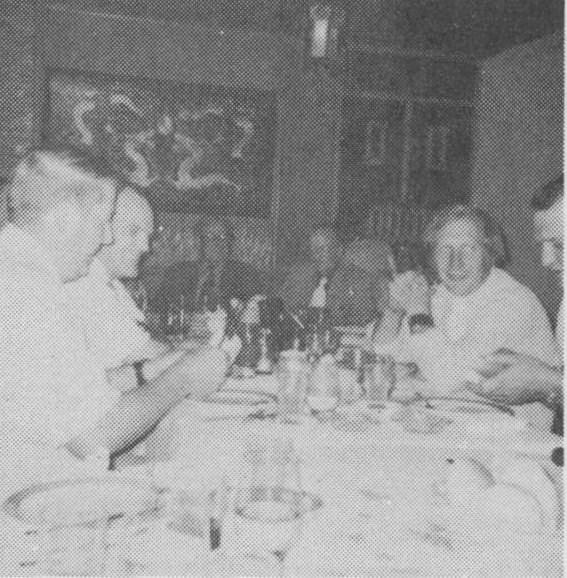 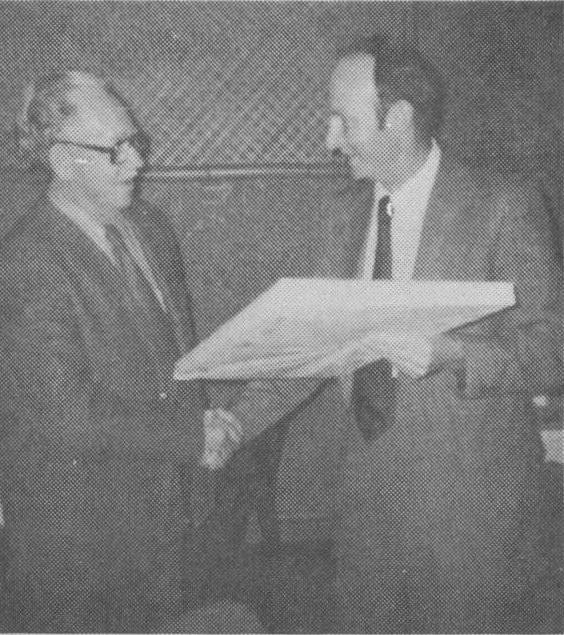 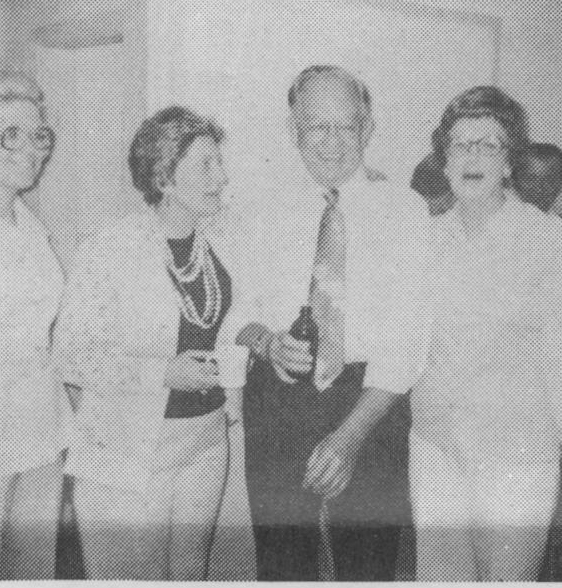 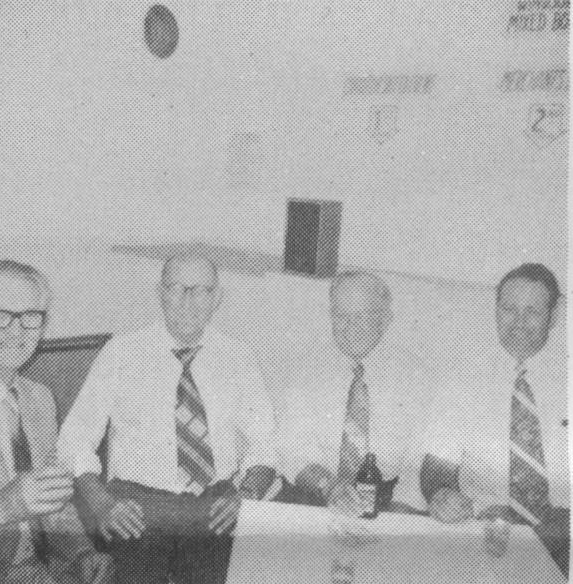 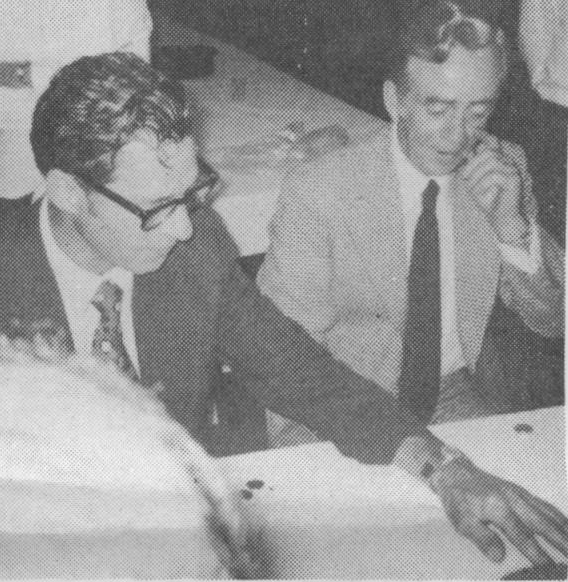 John Williams and Gordon McLeodâJohn raking in the dough!

The second party was a Retirement Party held for Tom and Steffie on July 17th in the Windsor Club Curling Rink. Many of Tom & Steffie's friends gathered together for the party. Among the group of friends were Mr. and Mrs. John Herne of Regina, Mr. and Mrs. Gordon McLeod of Edmonton and also Mr. and Mrs. Reg Hooper of Edmonton. Tom started with the Canadian Salt Company on July 7, 1947 and has been a dedicated Company employee for 28 years.

After a very nice pot luck dinner, John Williams presented Tom and Steffie with a stereo cassette tape recorder, clock and radio, on behalf of their friends. A social evening of visiting, shuffleboard games and card games followed.

All of the employees of Canadian Salt join together in wishing Tom all of the very best in his retirement. We're certainly going to miss you, Tom. Good Luck ! Do come in to see us often. 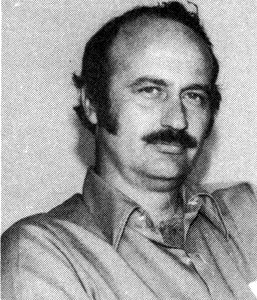 Ken Palamarek, who holds a pilot's license, was kind enough to take your correspondent for a trip in his private aircraft recently. Many thanks, Ken, for a delightful rideâbut do you know what really happened ?

Several weeks ago, a tight lipped Mine Manager called a bunch of us into his office and said, "Gentlemen, our target for tonight is a low level photographic mission over the Ojibway Mineâit's a tough assignment â any volunteers?

Since I was the only one left in the room after the mad rush to the door, he choked back his tears, shook me by the hand and said, "Good man ! I wish it were me going up there, but, unfortunately, I have a previous engagement. Here are your orders ! Report to Ken Palamarek at 1700 hours."

Buckling on my flying helmet and throwing my silk scarf over my shoulder, I proceeded to Windsor Airport where Ken showed me the light Cessna plane which was to be my home for the next hour.

"You're crazy, Ken, you can't send a kid like me upin a crate like that !" Ken smiled wryly and grunted, "We must all make sacrifices in times like this". Lifting my rigid form off of the tarmac, he strapped me into the co-pilot's seat after admonishing me not to touch any of the dual controls. With the aplomb of an experienced pilot, he proceeded to flip every dial in sight. "Request permission to take off," he called over the radio.

"Permission granted after you get your passenger back in the plane !" A quick jerk on my shirt brought me back to my senses and my seat. The sudden roar of the engine drowned out my screams and after a few minutes, I opened my eyes. "Why Ken," I cried, "The people look just like ants down there !" "You fool, they are antsâwe haven't taken off yet !"

After what seemed like an eternity, we were flying over the Detroit River at 800 feet and 80 miles an hour towards our target.

"When do they serve the food and drink, Ken ?" I yelled. Ken treated that remark with the contempt it deserved as he strove, despite my continual squirming, to keep the plane on course. Peering through the once spotless window, now flecked with the remains of my lunch, I saw the mine site way down below and placed my camera to my running eyes and snapped a few pictures.

Banking sharply, which made me wish I had brought an extra pair of undershorts, Ken proceeded to fly over the friendly skies of LaSalle and Amherstburg before checking with the airport for permission to land.

The landing must have been O.K. since the only recollection I have of it is having my white knuckled fingers being pried from my seat and the wonderful taste of earth when it is kissed.

Giving Ken a snappy salute, I returned to the Mine Manager's Office. "Mission accomplished, sir," I said, throwing the accompanying photos on his desk. He muttered something about sending a boy to do a man's job and promised a more suitable chore for my next assignment. Just what does, "emptying honey buckets" mean ?