January 29 saw the opening of the mixed bonspiel in Lindbergh. Nineteen rinks competed in each of three events. Winner of the Grand Challenge was the Dennis Maas rink, shown above. From left: D. Maas, V. Pankiw, E. Pankiw and E. Shumacher.

From Construction To Curling

Many of our Lindbergh personnel have migrated to Fort McMurray in the northeast corner of the province. Among those seeking fame and fortune in the Canadian North are the Doug Kecks, Bill Babeneks, Jim Greens, Tom Lungels and Ed Hillebrands. We wish them all the best in their new jobs and homes.

The Lindbergh Plant again heard the roar of construction this past year with the addition of two new bulk salt warehouses and a three bay garage for company vehicles. Dryhole Palamarek and Drillstem Seal made various trips with their witching sticks into the wilds around Muriel Lake in an attempt to discover a new gaswell but were unsuccessful.

One of the blessings of winter was the improvement of the Elk Point to Lindbergh road. The new construction last fall combined with four weeks of rain had made the road impassable forcing employees living in Elk Point to travel a wagon trail through fields and forest to reach the plant. The employees at Lindbergh plant and the truckers who hauled the salt during those weeks are to be congratulated on their ability to cope with a most exasperating situation.

It seems that with the falling of the first flakes of snow the local skiers don boots, sweater and associated garb and take to the hills. Since its formation two years ago, the Elk Point Ski Club is finally operating. Located 21/2 miles south of Elk Point, it offers a 2,000 foot slope and the longest rope tow in Alberta. As secretary treasurer of the Ski Club, your Lindbergh correspondent would like to thank the Canadian Salt employees who contributed their time and talents towards the completion of the tow and its eventual success.

Those persons who warrant special thanks are John Williams, Ken Palamarek, Ron Seal, Jim Rylance, Mike Buck and Nick Elaschuk. The club held its official opening on January 11, 1970 and approximately 60 ardent Skiers braved the â10 degree weather to witness the event and try the new slope. Future plans include a chalet and 2,000-foot slope for the experts.

The curling bug has again struck the area and the fans of the "Roaring Game" have taken to the ice with high spirits. The         Lindbergh Curling Club opened the bonspiel season with their annual Ladies Open.

Virgina Pankiw's rink from Elk Point won the First Event by besting Lily Seal's foursome from Lindbergh. Helping out on the Pankiw rink were Jean Borg, Alvina Schumacher and Irene Frisby. Chris Slywka from Elk Point copped the second event with a win over Georgina Morris from Lindbergh. To the winners, hearty congratulations, to the Losers better luck next year. January 9, 1970 saw the men take to the frozen lanes in the Lindbergh Men's Open.

After the debris had been cleared Ed Buck was found to be the better rink, capturing the First Event with a win over the Lavern Wilson rink. With Ed were Ed Pankiw, Paul Stepa and Don Rae. Mike Buck took the second event by defeating the Dennis Maas foursome. Assisting Mike were Milton Lorenson, Vincent Lawrence and Alec Wyness Jr.

It appears that Alec Jr. has inherited his dad's curling eye, so all men curlers be forewarned, this young fellow is going to offer some top competition for you in the near future.

With the departure of some of our employees we notice several new faces about the Lindbergh Plant. Marj Fedechko and Sophie Piech are recent additions to the office staff and Marlow Stone, Ray Ewasiuk, Dennis Gartner, Fred Culford, John Hillebrand and Ralph Lundgren to the plant staff. To these new employees we extend a warm welcome and wish them the best in their years with Canadian Salt.

A warm welcome to the new residents of the Lindbergh town site, Mike and Irene Buck, Marshall and Sherry Pelech and Bob and Rhoda Lorenson. We hope you enjoy your new homes and neighborhood.

Wedding bells have been ringing as of late and to the newly weds we offer our congratulations and best wishes. Those who have tied the knot include Henry and Nellie Ashby, Fred and Lois Culford, John and Elsie Hillebrand, Marshall and Sherry Pelech and Bob and Rhoda Lorenson. We hope you enjoy your new homes and neighborhood.

Wedding bells have been ringing as of late and to the newly weds we offer our congratulations and best wishes. Those who have tied the knot include Henry and Nellie Ashby, Fred and Lois Culford, John and Elsie Hillebrand, Marshall and Sherry Pelech and John and Dale Lorenson.

Congratulations are also extended to the couples who were honored by a visit from the stork. Proud parents are Del and Sylvia Smith, a daughter, Joanne Lisa on November 19, 1969. Bill and Shirley Pachalch a daughter, Rhonda Lee on November 27, 1969; and Fred and Madeline McAleese a son, Paul, in December. 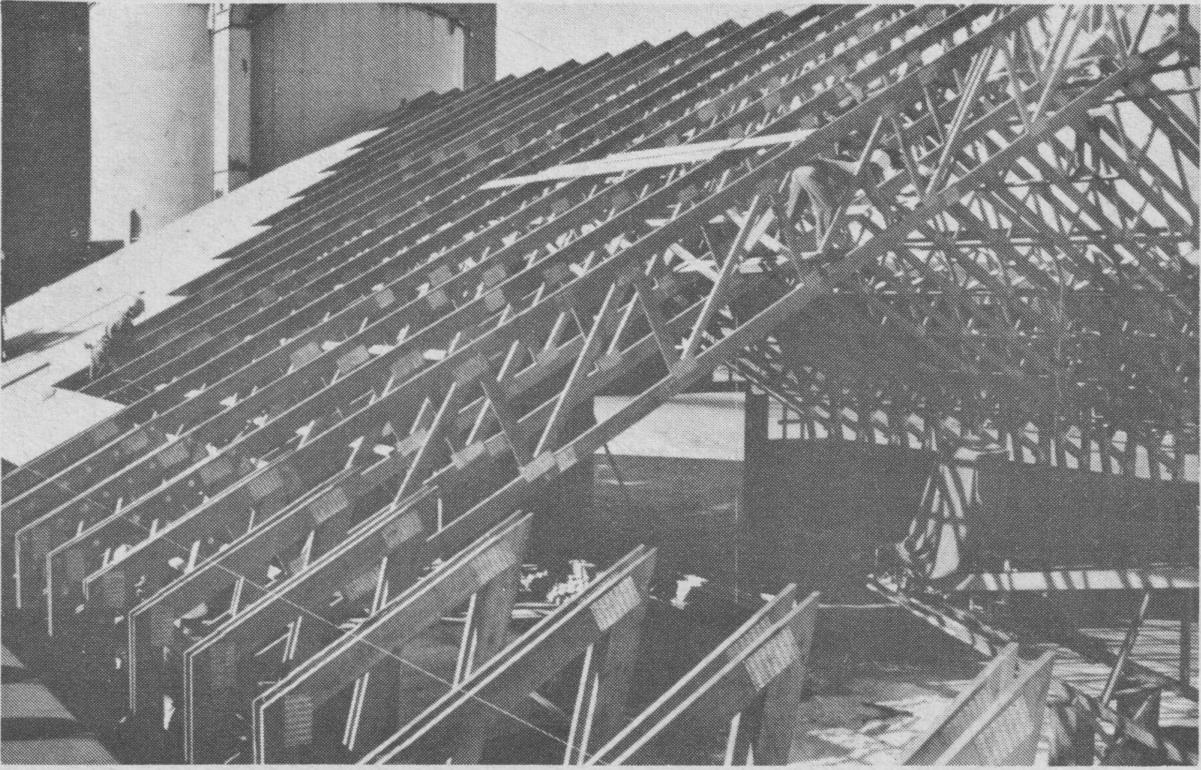 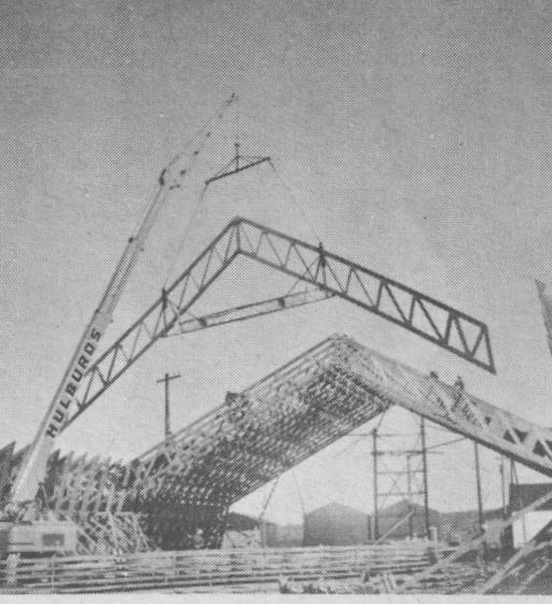 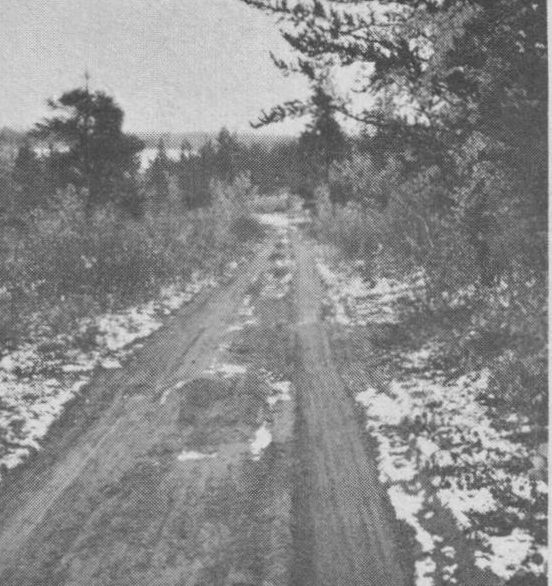 Alternate route to the Lindbergh Plant. 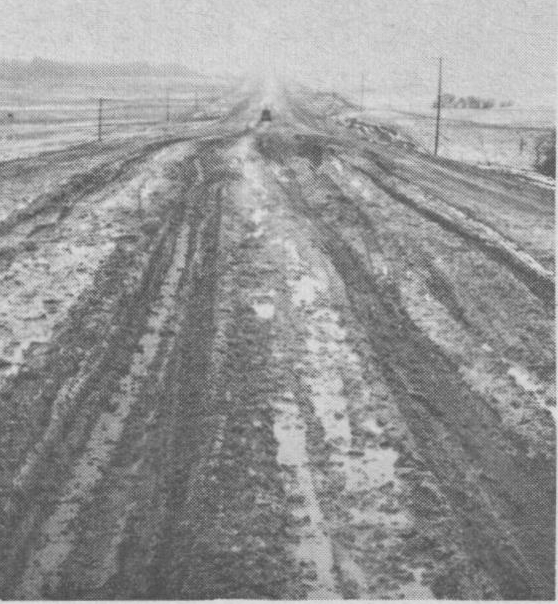 Lindbergh Road during the fall monsoon. 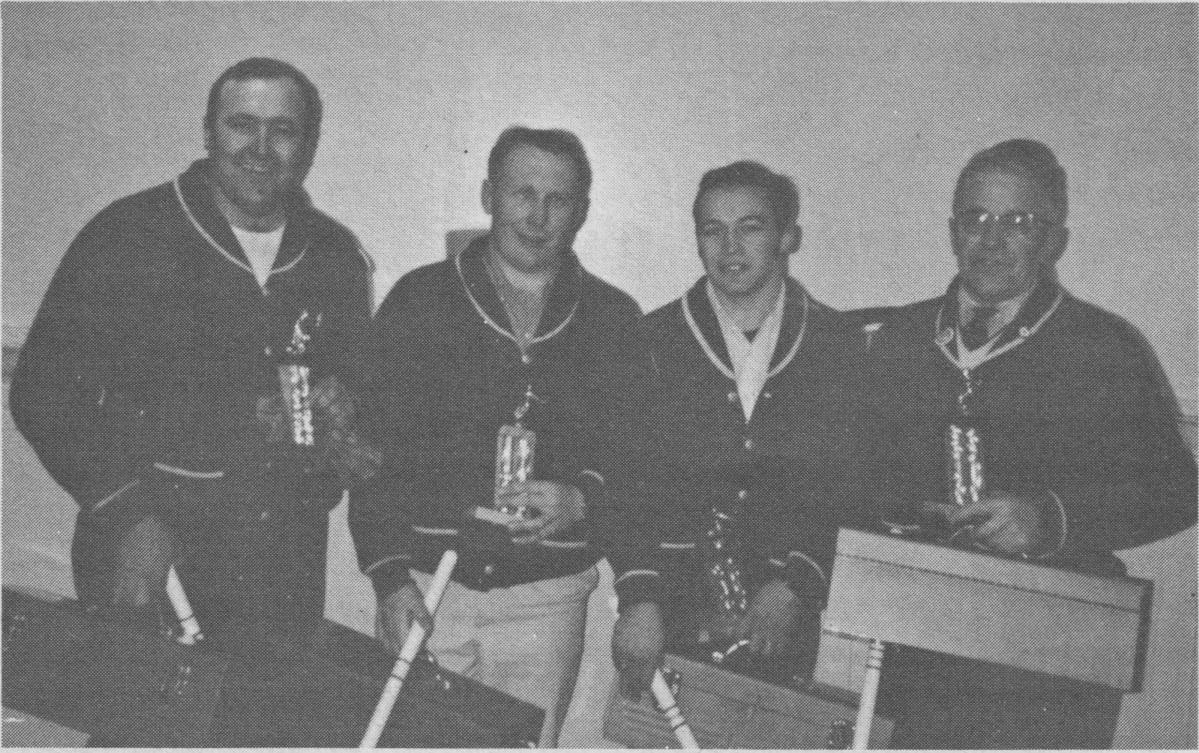 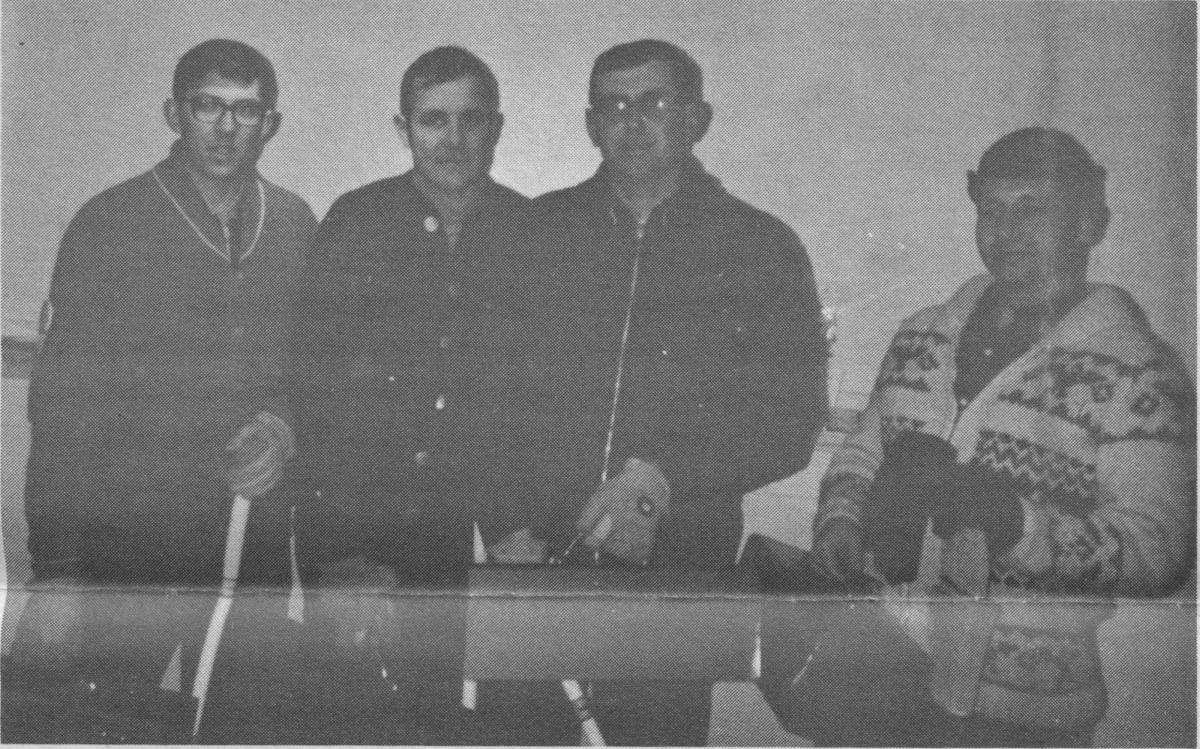 Runners-up in the Lindbergh Men's Open:
the Lavern Wilson rink. 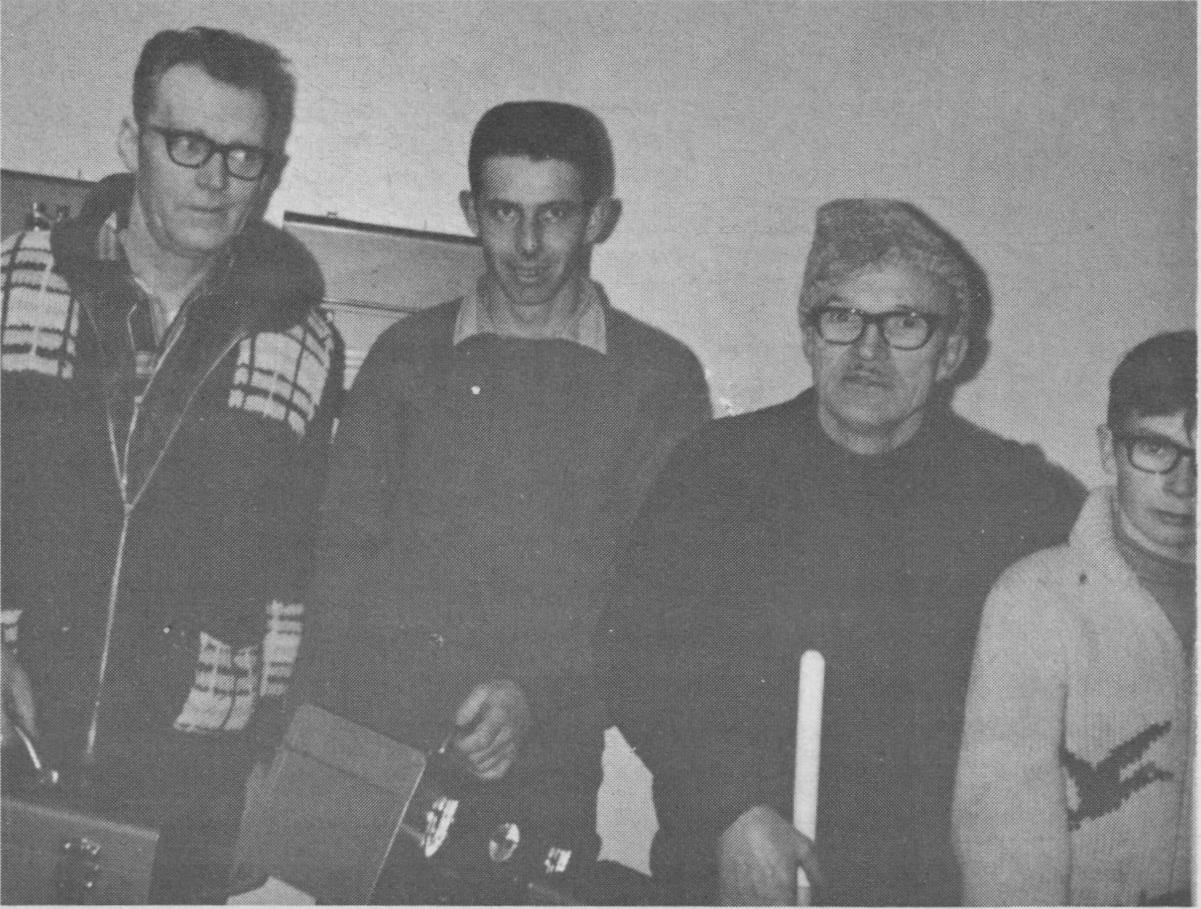 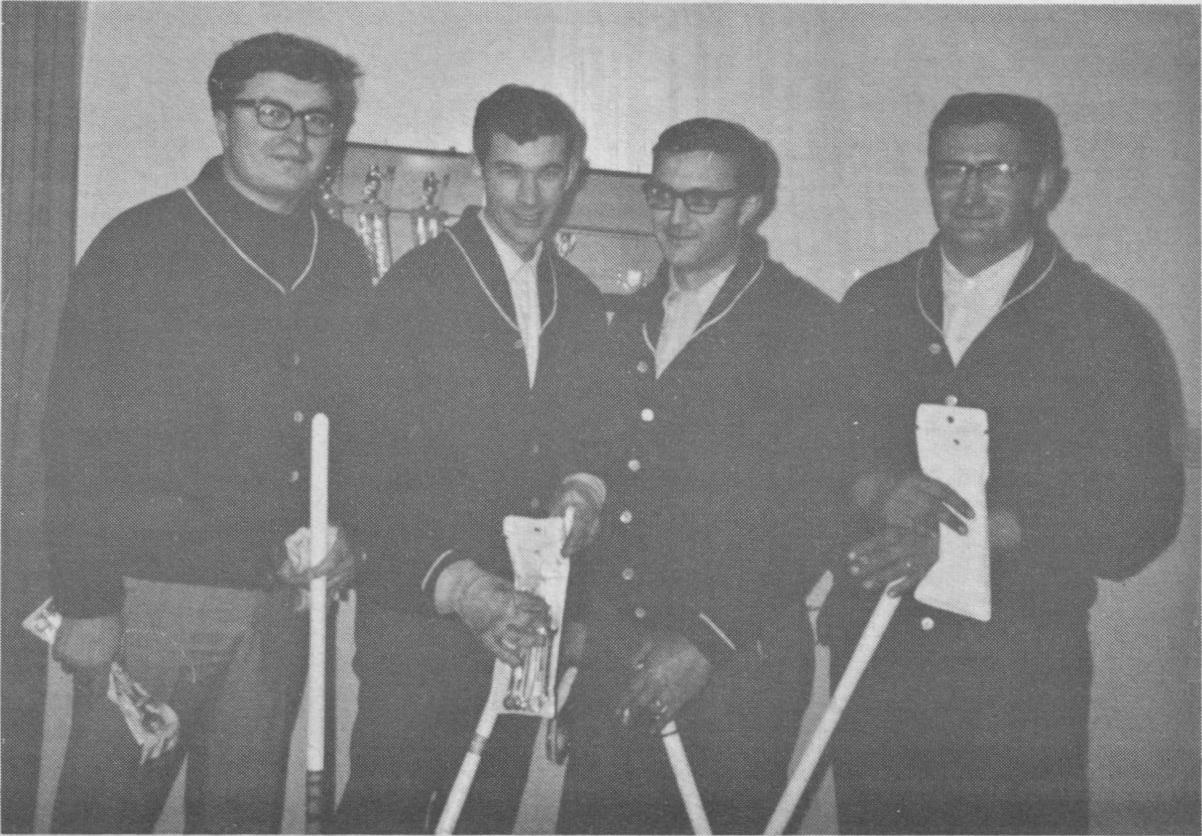 Runners-up in the second event, Lindbergh Men's Open:
Dennis Maas and his rink. 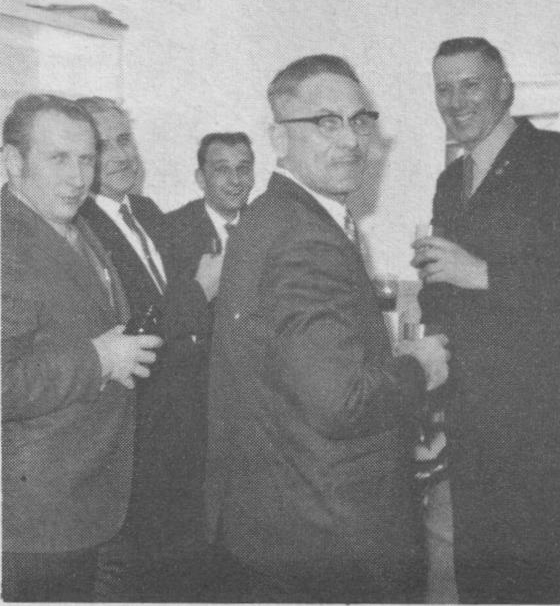 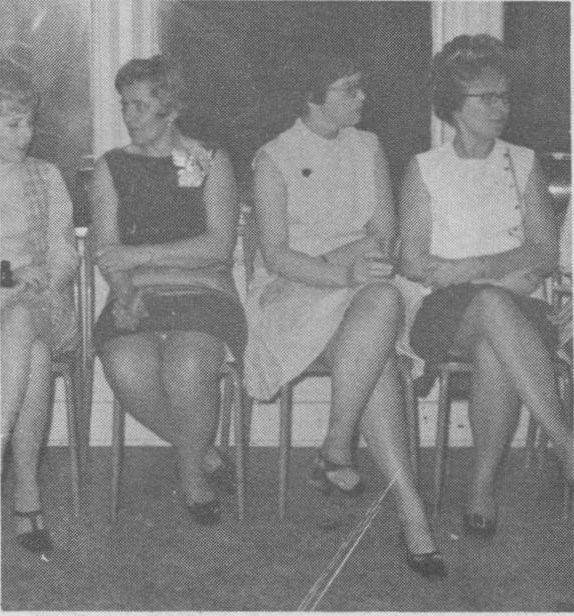 Some of the ladies enjoy a chat at Christmas Party. 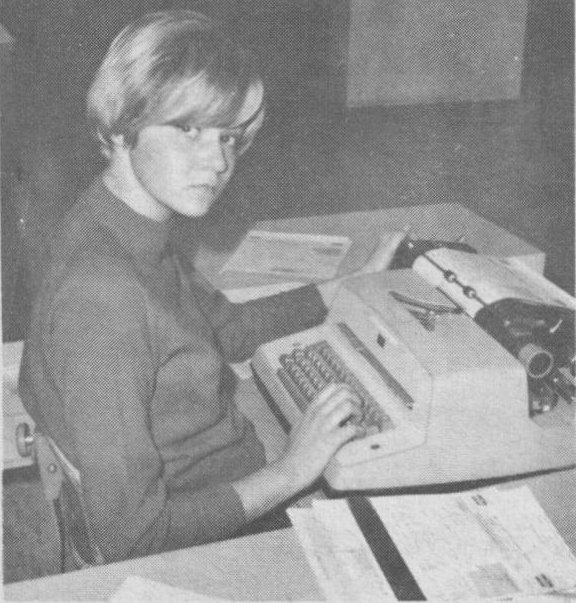 Marg Fadechko, a new addition to the Lindbergh typing staff 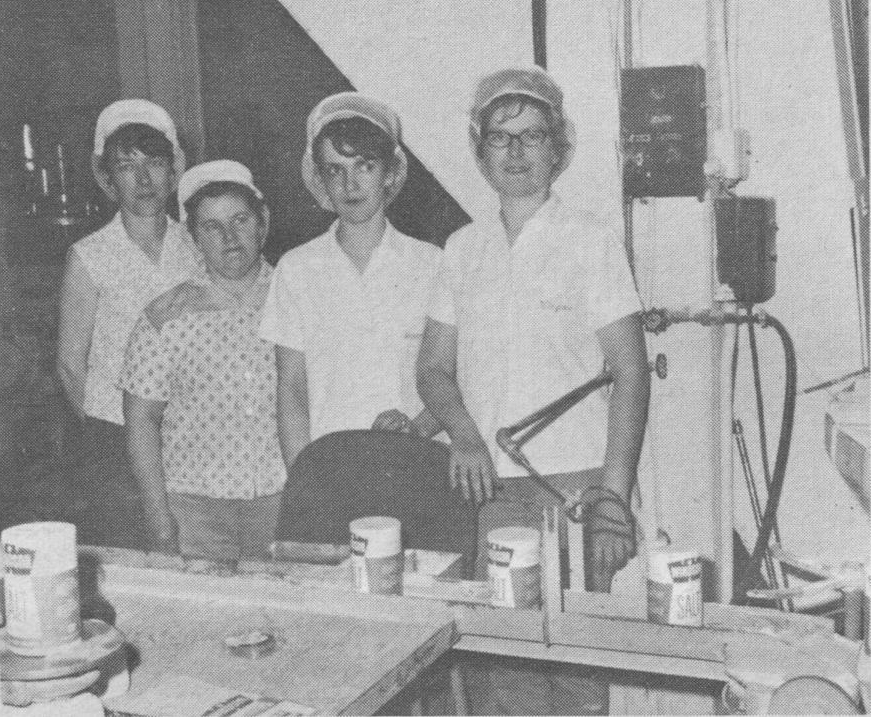 The last round can filled at Lindbergh: Shiela Lorenson, Edith Hodge, Darlene Wyriess and Virginia Pankiw. 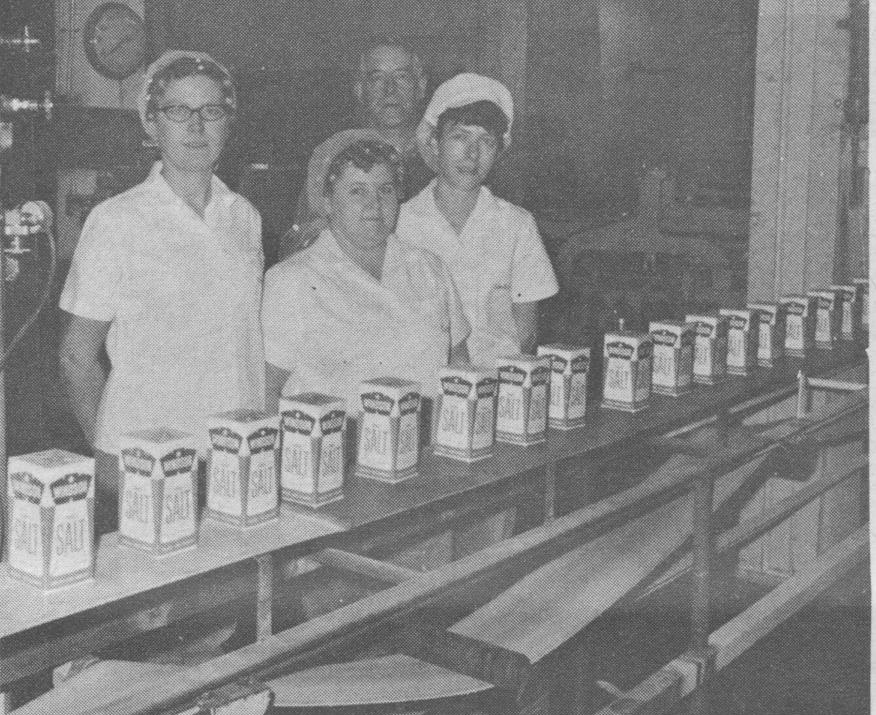 The last of the "squares" at Lindbergh leave the belt. 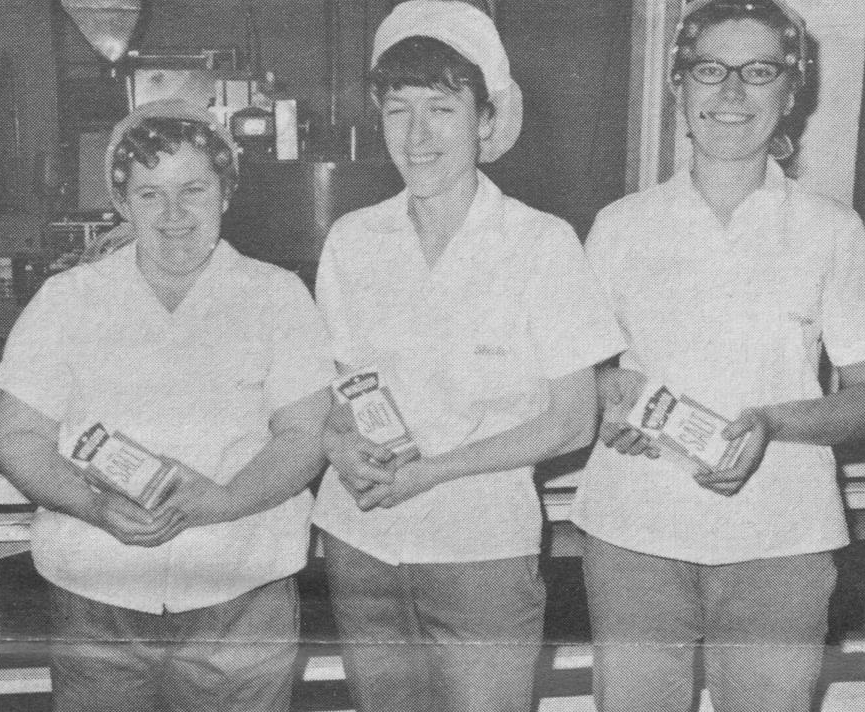 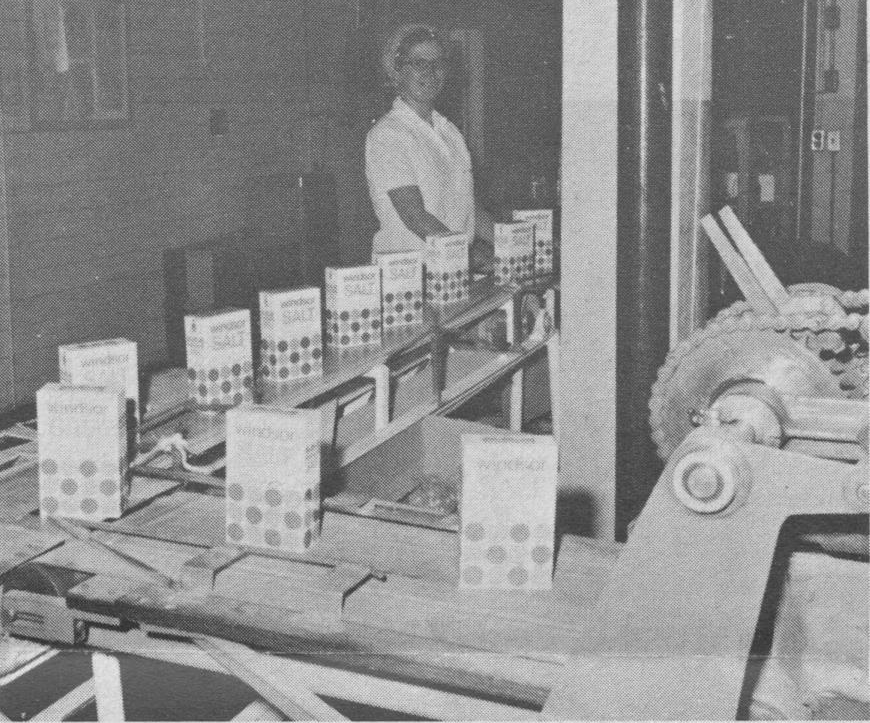 The arrival of Winter has brought out the winter sports enthusiasts in and about the Lindberg works area.

Curling, skiing, hockey and snow tobogganing are in full swing with a large number participating. January 29 saw the opening of the mixed spiel in Lindberg with 19 rinks competing for the trophies and prizes in each of the three events.

The Grand Challenge went to the Dennis Maas Rink from Elk Point with a win over Jim Rylance's foursome. John Zayonce took the marbles in the second event by defeating the Nelson Rink from Heinsburg. John likes to make his curling a thrill for the spectators by winning his games with the last rock. It's a little hard on the ulcers isn't John?

The third event went to the L. Kapjack Rink from Heinsburg with a win over P. Stepa from Elk Point. All in all it was a very enjoyable spiel for the spectators as well as the curlers.

We were sorry to hear about Alex Wyness being under the weather as of late. We wish him a speedy recovery and hope that he will be back in the ranks again shortly.

New employees at Lindbergh since the last issue number only one. Conrad Stangeland, who hails from Vermilion, has joined the office staff. He will be assisting Ed Pankiw in the distribution department. We would like to wish him a hearty welcome to Canadian Salt.

It seems that the office staff have the market cornered on Saskatchewan Mickies. Tom Melnyk won the giant jug in the January draw bringing the total to five for the pen pushers. The draw is sponsored by the local Elks, who award a jug a month to some lucky ticket holder.

George Krissa seems to have had an inside tip on the Irish horses in December. George finally got a rebate on the oats bill that he has been making paymonts on for about twenty years by winning 100 pounds sterling in the Irish Sweepstakes. Congratulations, George. 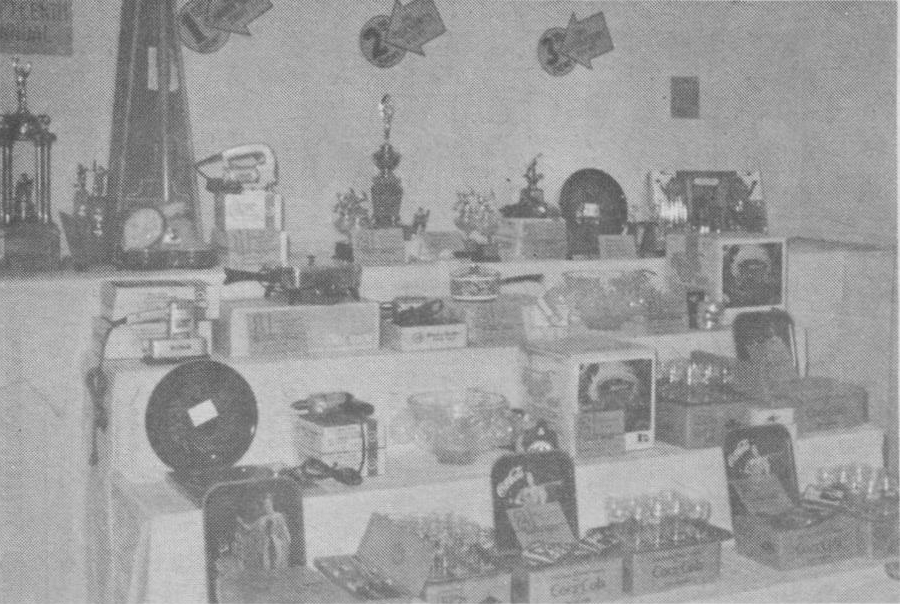 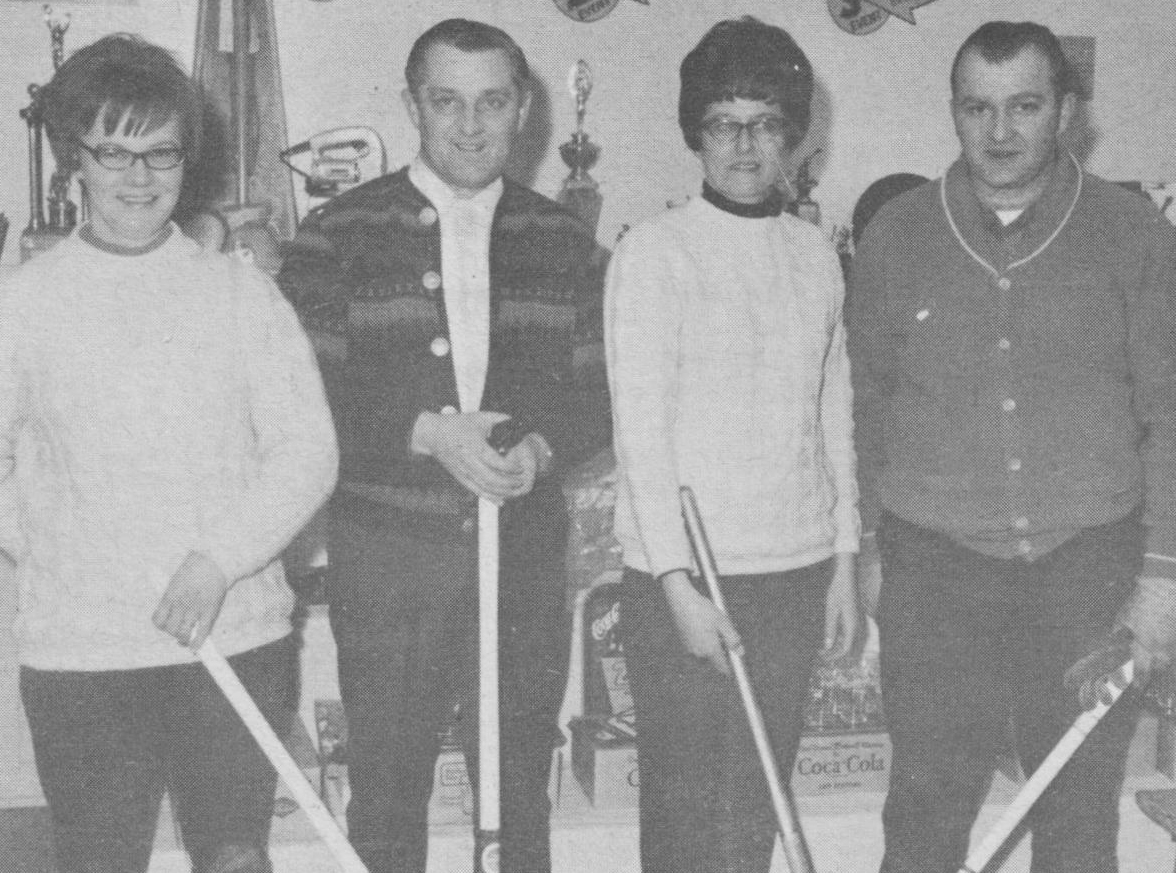 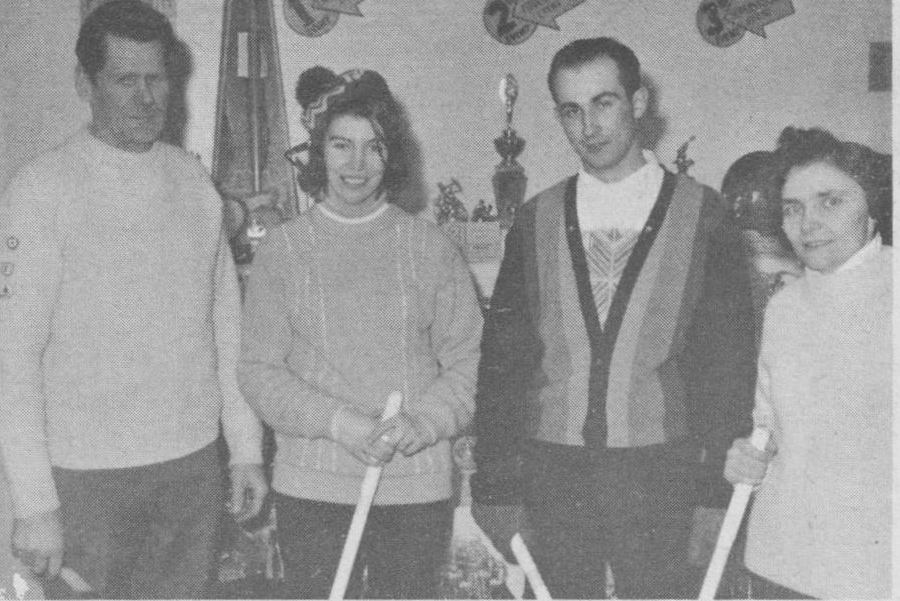 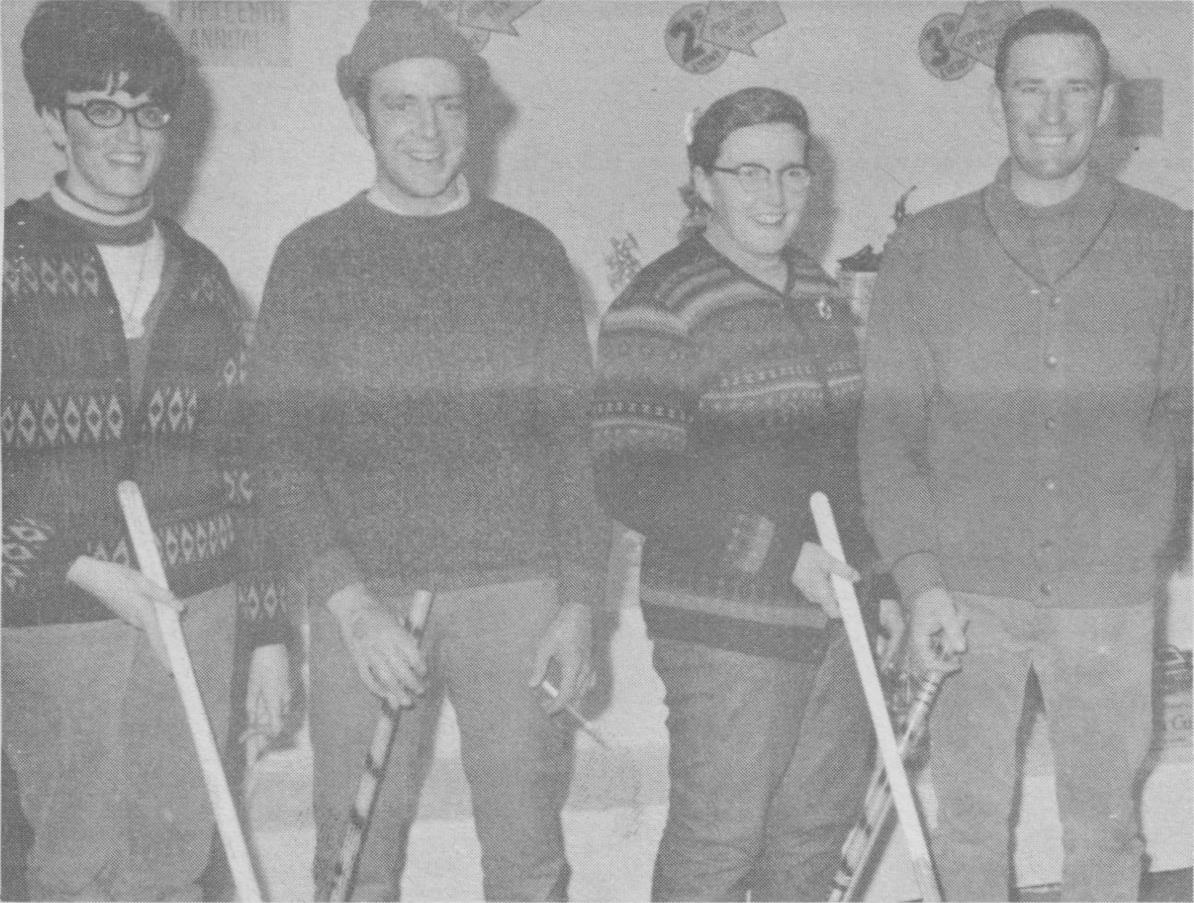 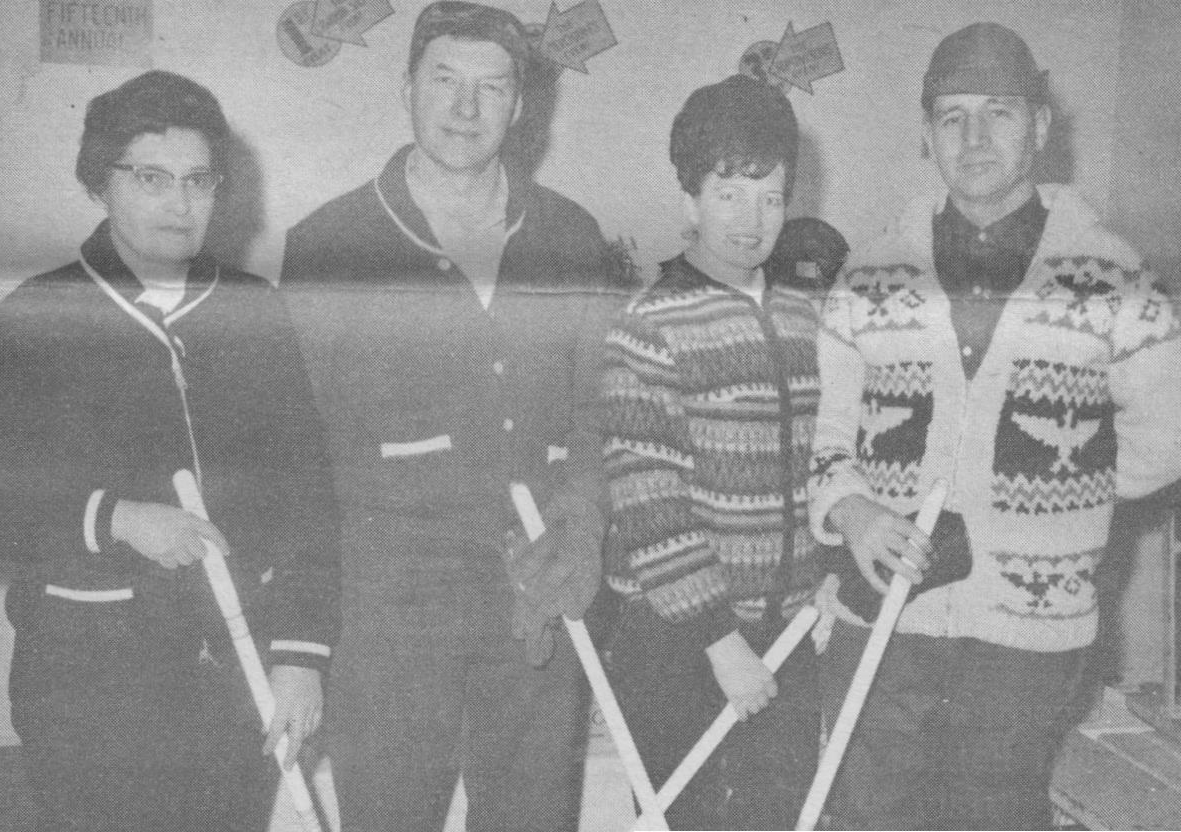 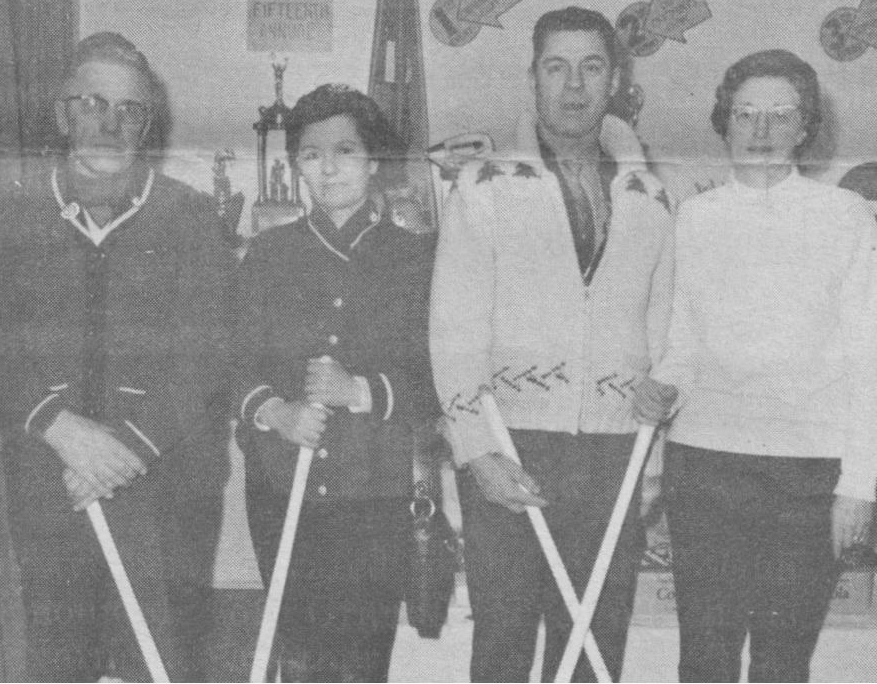 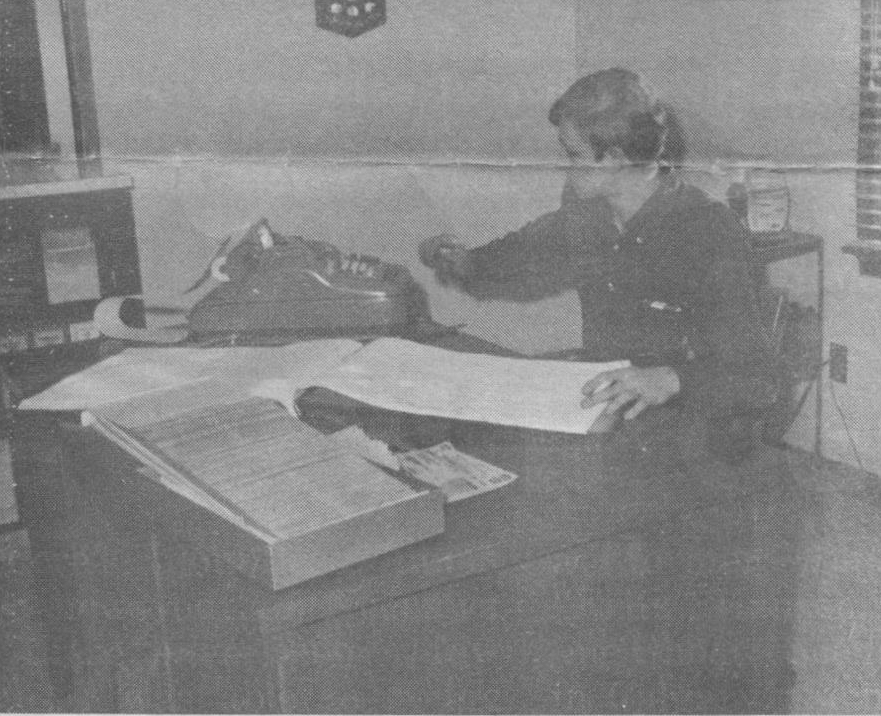