The Davis family moved into their homestead, now the Lindbergh townsite, about 1909. Son Eddie Davis homesteaded just east of there. He opened a store at Mooswa and became postmaster. 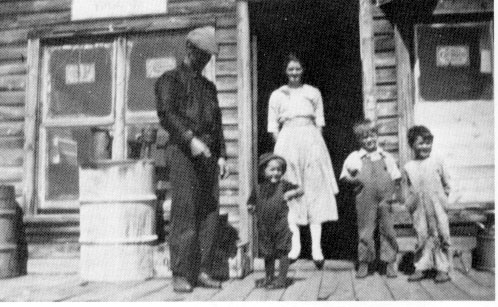 Edward Davis bought the Mooswa store in 1920, from Mr. McCune. Jim Dennis was hired to move the family from the Davis homestead located south of what is now Lindberg to Mooswa.

There was only our store, the Government Telegraph run by Art Bowtell and the Post Office down towards the ferry landing, which the Soper family was in charge of. When the Sopers moved away, Dad had the Post office moved to the store.

Across the road from the store about 100 yards down towards the ferry landing there was a log building. This building had a sod roof, separated by a long narrow hallway. One half of the building was used for the first Telegraph Office; this was in 1884-85 shortly after the Reil Rebellion. Dad used the front part for a 2-horse stable and the back for the cow.

About 50 yards west of the store was another log building, 1820 she-feet with a small lean to like a stable. They said it had been used at one time for a barracks for the North West Mounted Police. Mr. McCune also lived in it while he was building the store. Dad used it to store ice. There was no drinking water close by. He had to store enough ice to last through the summer. The ice was cut into blocks from the river and hauled by sleds pulled by the horse team to be stored in the shed with straw and sawdust to insulate it from melting.

We had 3 miles to go to school across the creek. It was called Mooswa Creek School. We traveled most of the time on horseback, I was on one horse, Marshal on another with little Chester on hanging on for dear life behind one of us. The Andersons, Pasmores and Bowtells also rode with us to school. Six or seven horses most of them carrying two kids, traveling back and forth, morning and night. We would follow the road part of the way, then switch to the horse path because it was faster.

This story has been told by the recollections of Sherman Davis's days at Mooswa.