Now that curling is something of the past, we take down our fishing gear and set out to get the biggest fish. The Anderson family have already started throwing back anything under 3 lbs. Bill, Faye and Bert came home with 15 - 5 lbs. and over the other night. Irene immediately gets on the phone and "How would you like some beautiful big fish" â if the answer is no, what a mess of fish to fillet.

Frankie boy has been exercising his muscles putting up wire around the tennis court. By the time this issue is out, we hope to have our tennis club organized and hope to be over the soreness that goes with the first few games.

On page four in "The Story of Salt" pamphlet is a picture of the steel derrick at Lindbergh, ( which I am told is not 90' high but 108') I always was under the impression that this derrick was quite a nice looking land mark and when giving my unprofessional opinion of leaving it as is, was given this professional opinion â "If the derrick stays and the well needs servicing, it would be quite impossible to service the well with the derrick over it, making it entirely impossible to move a rig over the well" â understood â The derrick came down. We liked the looks of the derrick, but were getting rather tired of telling the little visitors â No that is not an oil well â It is not a drilling rig â No, no, no, it is not where the little men go down to dig salt. Ah well maybe they'll concentrate more on the "Dry Ice" coming from the fused plant.

It seems there are some people around here that have been married for a long time.

Alex and Nellie Wyness were guests of honor at a party celebrating their silver wedding. Their many friends and fellow employees from Lindbergh and district presented them with a chest of silver.

Luigi and Mary Grosso pulled a sandy on us. No one knew the date of their anniversary or which one it was. But as usual, we found out and on Mary's birthday, Mrs. Bowlby was hostess at a surprise birthday party for Mary. The ladies presented Mary with a gravy ladle, berry spoon, cold meat fork and pickle fork which matched her new silver set.

When your 50th anniversary comes up Mary, you might as well let us know as we'll find out.

The man with the plow is Hammy Oliver. Says if you let it go, it will dig a hole three feet deep â Well that's a matter of opinion, but for Hammy who just loves gardening, that little tiller is the real thing.

Farewells were said to:

the Lewis family who recently left for Thorsby, Alberta.

Henrietta Keck who left the company's employ on April 30th. She was presented with a hostess chair.

Larry Meger who was presented with a grip, left on April 30th.

New members of the salt family are, John Zaraska, who hails from Elk Point, Peter Smerchinsky, also of Elk Point and Lila Sharkey a former employee recently returned to replace Henrietta in the Dairy Mill. We notice that Lila is "Teachers Pet" she must be as she's wearing a diamond from a certain young teacher in Heinsburg. You just keep up with the home work Lila and you should get your Diploma, a wedding ring. Congratulations to you and Vern, Lila.

New arrivals on the townsite are Mr. and Mrs. Frank Kerklaan and family. Frank is taking Jack Lewis's place as steam engineer. We trust they will enjoy living in our community as much as we do.

We are pleased to see that Mrs. Oliver is up and around after a recent accident she had at home.

Turn to your Tourist Guide and note "Frankie Gas Works". In the general direction of said works, a new gas well is being drilled. As usual at times like this, it's hard to keep track of certain people. Still think they should put telephones at well sites.

It seems that this time they had nothing but good luck, no rigs burned down, no dry hole and no accidents. This we like to see, and it seems that this well turned out to be best producer we have.

A pony League Base Ball Club has been organized at Lindbergh with Herb Wyness coaching. The ladies of the townsite have organized several drives to raise money for uniforms and baseball equipment for the club. I know the young men and Herb appreciate their efforts and on their behalf I say Thanks ladies. At this writing, they have two games and two victories.

In the next issue I hope to have a picture of the baseball club, fully dressed.

Nick Elaschuk (maintenance) is the first to build a new home on the townsite. At the rate he's going, it shouldn't be long before the family move into their new home.

1. Hoisting up cable for Freddie McAleese toâ¢hook on derrick. Left to right are Bob Lorenson, Ken McGinnis, and sitting down is

Gerald Stults. It was Gerald's birthday, and he was allowed to sit down on the job whenever possible.

2. Leslie Austin, displaying her apron. The young ladies did their own commentary as they displayed each article they made. 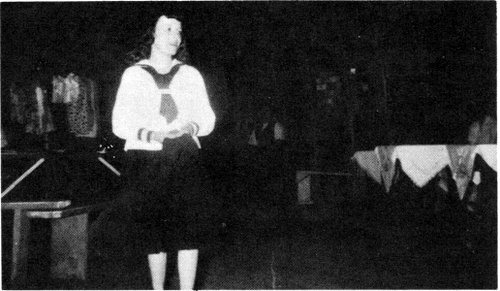 Faye Anderson, displaying the mittens that won her first prize
at the 4H Club Achievement Day.

1. Just before the big crash.

2. A special attraction at the Achievement Day was the fashion show. Fashions followed the early 1900's (I think). This little lady is Faye Anderson. 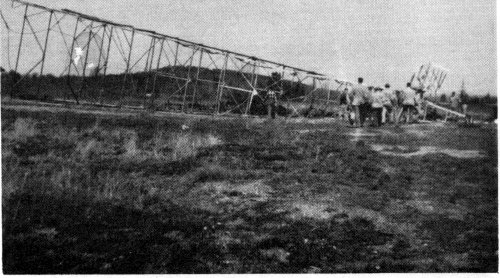 These are not vultures after the kill. Notice the bent angle iron. 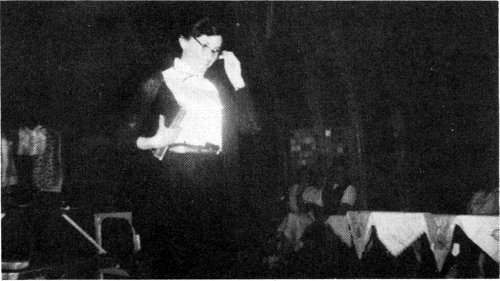 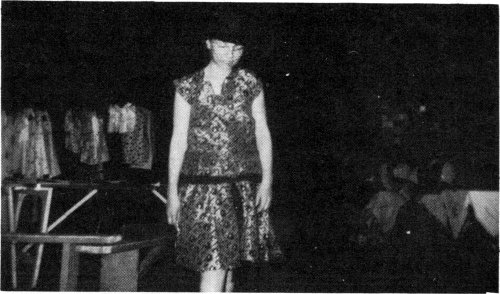 The young lady with the high-buttoned shoes is Joanne Lacrosse. 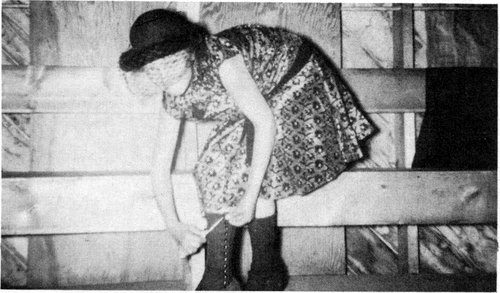 Joanne puts the buttonhook to good use.

1. The official throwing of the switch of our old (new to us) Neepawa Generator.

3. That right, Boss? Gerry Bowlby, the second one to throw the switch. 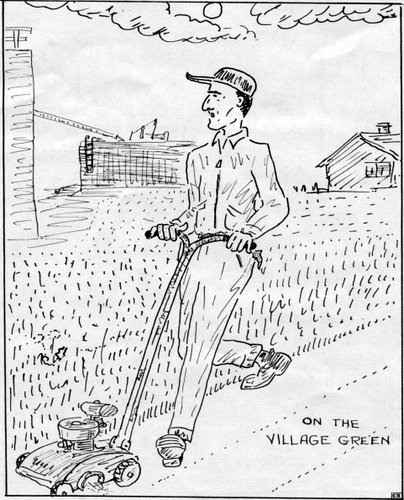 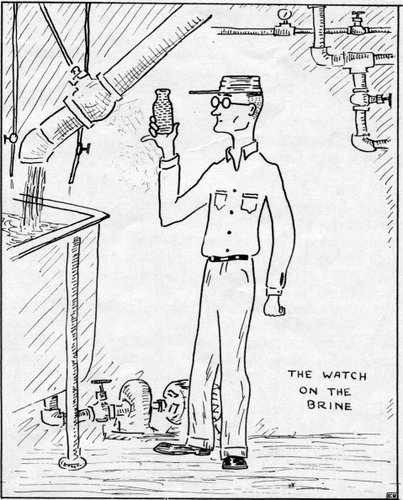 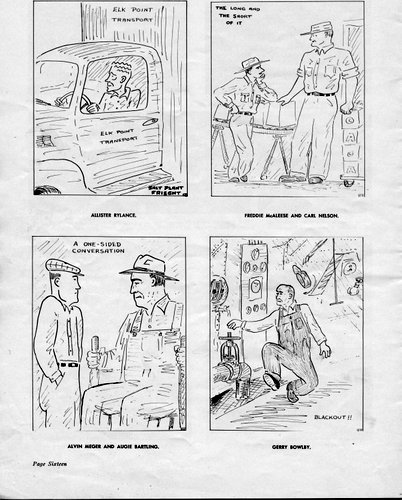 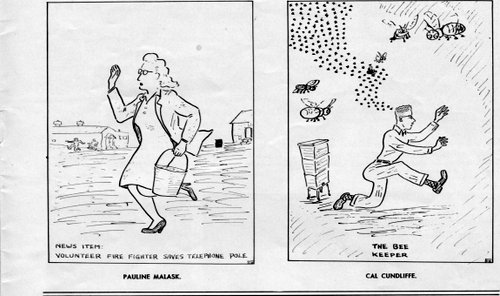