Our Chief Engineer, Stephen Venyi, left the employ of our Company on February 12th. Louis Grosso is presently acting as Chief.

Ernie Better caused a great many emphatic "Ooh's" and "Aah's" as he drove up to work in his new '53 Ford. Quite an improvement over the old one, eh, Ernie? 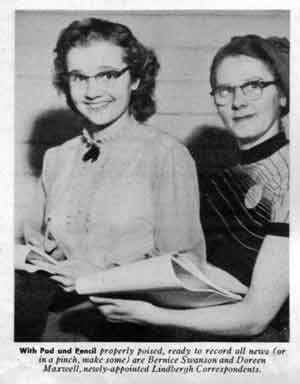 We are being swamped with orders for 2# Rounds, as a result of which the Dairy Mill Girls are putting in a bit of overtime. Good to see business is pickin' up!

Congratulations to Tom and Steffie McLennan, who celebrated their Wedding Anniversary No. 1 on February 14th, 1954.

The new furnace in action. On January 29th, at 3.30 p.m., a thin cloud of silvery smoke curled skyward. Yes â at last the new Fused Furnace began production, with Alf Fakeley in charge of the opening operations.

We got a kick out of a letter we received from the Canadian General Electric Co. Ltd., advertising a low-temperature resisting Silicone rubber. The letter starts out with a cold- looking "How cold is cold?" The next line goes like this: "Your answer to that question may differ from ours, but here are some facts which may surprise you. â THE LOWEST NATURAL TEMPERATURE RECORDED ON EARTH WAS 70°

Obviously, the writer of this bit of advertising matter has not heard of Lindbergh, Alberta, where some four years ago the temperature went down to 74° below. In fact, this year, we have had temperatures as low as 66°, 68°, 68° and 66° below zero four days in a row. Maybe we could tell C. G. E. how cold really cold is!