FRANK REINTJES, it seems is the only lucky fellow with a "RIVER VIEW" home now. A chop-choppin was heard by a lot of townsite folks, some one did go to find out who the eager beaver was and found Frank at the bottom of the bank with almost all the trees down. Now when he sits down to dinner he has a lovely view of the river.

MR. WILLIAMS vacationed at Windsor and the East Coast, returning with his family. They reside in Elk Point, where Mrs. Williams is busy teaching. After a lot of tough luck with their furniture, we are happy to see that they are now settled in their new home.

DOUG KECK and Henrietta Anderson vacationed at Lethbridge and Medicine Hat. We all thought that it would be Doug who would .be coming back all married up, but it wasn't, only his brother. Sometime soon Doug? ? ?

ANYONE WANT TO RIDE A BUCKING BARRELL? Pearl Stewart and Allan Ingersoll tried it while on vacation at Athabasca Ranch near Banff. Pearl came back all bruised, we gathered that she can't ride. In spite of getting bucked off, Pearl says they had a real good holiday.

Pearl is also our entertainment convener for the coming year. She has put on some successful bingos with John Nimmo, Bert Ayres and Jack Mair coming around winning prizes at our first Bingo. Next she tried a Turkey Shoot on October 14th, which also was a huge success. It was held inside the curling rink, with the lunch bar open to all those hungry turkey hunters. If Pearl keeps her little brain busy on these money making entertainment schemes, I think she will likely be next year's convener as well.

FAREWELLS were said to Miss Lila Sharkey (Dairy Mill) who is now attending Alberta College in Edmonton. All wish you the best of luck in your studies Lila.

WE WELCOME BACK Doris Wiegerinck who joined the Edmonton office staff on September 13th.

Since the last issue, we have had the pleasure of visits from Jack Mair, Bert Ayres, H. A. Clarke, and John Nimmo.

CONGRATULATIONS to Ray Hammond and Doug Keck who received their five year pins on July 21st and October 27th.

TOM McLENNAN and family vacationed with relatives in Hannover, Ont. On his return trip he visited with Mr. and Mrs. Ayres, and also made a tour of the "NEEPAWA WORKS".

WITHOUT BOASTING we can now say that our curling rink is the "Bestest Yet" of any rink in this area. That is interior and exterior. A lot of our muscle bound men out here got out and painted the roof and without a rest just slapped on that siding so fast, that now our rink really looks good. They finished it before the snow came this time. Guess last year they just got a bit too cold out there.

CURLING should again be well under way soon, the club has held a meeting, elected new officers, and George Krissa and Alex Wyness are now the Official Sweepers, or caretakers of the rink. Now if it just keeps getting colder like it is, we should soon have ice.

SHEILA LORENSON has taken her old position in the Dairy Mill, replacing Bertha Fakeley who has taken a three month leave of absence.

WE HAD A SLIGHT ACCIDENT, which for awhile made us think may be fatal to our next Safety Award objective â The General Manager's Prize, due on November 24th. Marvin Bartee (Boiler Room) got a bad cut on his arm, but is now all patched up and well again, without losing any time. Every one here is now ever so safety conscious â We surely do pity the poor soul who even dares to get hurt now.

BERT AYERS AND JACK MAIR just dropped in on us, we tried to think of a way to kidnap them for our Hallowe'en party â It seems it is impossible for them to stay â All so sorry â We shall sadly miss "Maestro Ayres" and "Basso Mair".

The Recreation Hall was nicely decorated by Pearl Stewart, Irene Anderson, and Yours truly, for the Hallowe'en party held on October 27th. The spruce boughs and all that brush you see in the pictures got painted silver, when the job was finished, I just had to fight the girls off, imagine them mistaking me for one of those long scrawny, homely old branches â I did get a peek in a mirror â you guessed it â same colour.

We danced to records, although we had an orchestra (Bill and Irene Anderson, A. Battling and Allan Ingersoll) who were to play after the unmasking. But we just kept righ on dancing to records â What happened to the Orchestra? ? ? I'LL Never tell.

Irene Anderson made quite an entrance with her . . . ? ? ? That old Donkey (Maude Krissa) can sure kick eh Irene?

We had a very good variety of costumes, other than one Donkey, they were all HUMIN BEINS. The most ragged specimen was Alex Wyness, Most Brazen and Biggest Blond was none other than Allan Ingersoll, the queerest clown with a Gorgeous Chinese Doll was John Williams and The Missus â To make short what could be a long and funny tale, it was a very good party, with a Whole lotta well dressed folks. 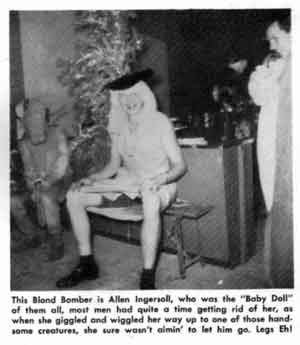