We extend a warm welcome to Mr. and Mrs. Mel Schumaker and son Christopher. The Schumakers, formerly of Neepawa, Manitoba, arrived on September 5th to take up residence here.

Leatha Ingersoll, formerly one of our packaging girls left our employ on September 10th. She is working in Edmonton now. 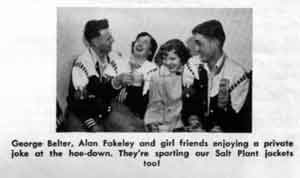 The Cascade Community Club held a Corn Roast on September 17th. Unfortunately the weather was extremely cold and the corn roast had to be held in the recreation room of the Staff House. A large crowd of townsite and community kiddies and adults gathered to see the film "Captain Kidd" and to partake of the corn, hot dogs and coffee served afterwards by the lunch committee.

Don Fraser ( Maintenance Dept.) is the proud father of a new baby girl. That makes three doesn't it Don? Congratulations!

For some reason or other, Mel seems to think we live on the very fringe of civilization. Just because the men only get their hair cut every three months and beer costs 200 more than in Manitoba it doesn't mean that we're completely bushed! Or does it?

Herbie Wyness, son of Mr and Mrs. Alex Wyness (Prod. Foreman) and a past employee of the Lindbergh Plant is home on leave from the R.C.A.F., Clinton, Ontario. On his return East he will be stationed at Toronto. Nice to see you again Herb!

Several trigger happy Salt Plant employees have gone a hunting in the wee hours of the morning. However, none seem to have had too much success. It must be the horrible, inaccurate sights on the guns â it could certainly not be anything else, could it Tom? Better luck next time boys!

Bert Ayres recently spent a few days at the Lindbergh Plant. His visit was the occasion of a "Whingding" (party) with himself as guest of honor. A large crowd of friends and plant employees gathered in the Staff House Recreation room to participate in the festivities and the delicious lunch that was served by the ladies! Hope you come again, Bert. You're a perfect excuse for a party.

On October 16th, the Frisby farm was the scene of a party attended by about 35 teenagers from the townsite and surrounding community. Florence Frisby and Herb Sutton acted as host and hostess. Local music for the hoe-down was supplied â a violin, two guitars and a squeeze box making up the orchestra. A delicious lunch prepared by several of the gals was served and brought the party to a close. Everyone is reported to have had a wonderful time!