Just a few miles south of the Ferguson Flats district, a very important industry; the Lindbergh Salt Plant is located. This is the only industry other than agriculture here, and the only one of this type in Western Canada.

The story of its development goes back to the years 1945-1946 when three oil companies, the Anglo-Canadian Oil Company Ltd., Home Oil Company Ltd., and Calgary and Edmonton Corporation were wildcatting for oil in the Lindbergh area. Instead of oil, these ventures revealed a new resource, a bed of salt. It was an extension of the McMurray salt bed which is believed to be over 700 miles in length, about one half mile below the surface and about 1000 feet in depth. To compensate for the expense involved in drilling several dry holes, this trio of oil companies envisioned a new project, the production of salt. With water from the North Saskatchewan River, a railway passing by, an ample supply of natural gas, the site here was ideal. They pooled their resources and with encouragement from chemical engineers, a decision was made to incorporate as an independent company, the Alberta Salt Company.

A construction program was launched and the million dollar plant was completed late in 1948. It was a very modern, self contained unit, providing  its own water from the river, steam and electrical power and natural gas for fuel. A modern townsite was established for its employees as well as other facilities.

It produced about 120 tons of salt per day and employed about 40 people. Its products were sold under the trade name "Cascade". The manager at this time was Mr. H. Ayres who remained here until 1954 when he was replaced by Mr. H. Sills. 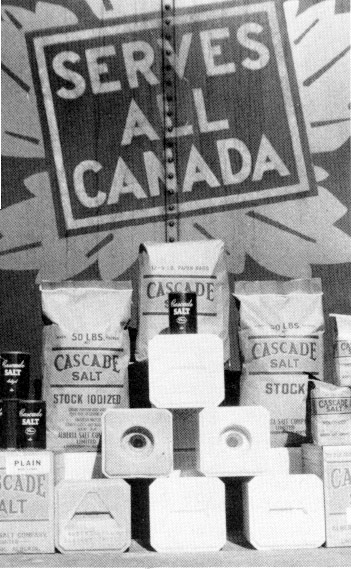 Official opening was held on March 19,1949. With officials and newspaper men present from all parts of the province, Lindbergh gained recognition and an important place on the map.