LINDBERGH AT WORK AND AT PLAY

WE EXTEND A WARM WELCOME to Cavin Cundliffe, wife Eileen and two daughters who joined the Salt Family on March 11th. Cavin and family hail from Lloydminster. He will replace Pearl Stewart.

TWO SPRY YOUNG FELLOWS FROM MONTREAL visited us recently. Dick Rowat, who is getting to be an old hand at curling, couldn't resist. He was out throwing rocks and sweeping for four ends. On the fifth end Cy Champion, who had never curled before, took over. How they come out of it is beyond me. Usually the first game produces sore back, sore arms, stiff muscles â well, just plain sore all over. But not these fellows! Next afternoon Dick was out coaching the ladies who were practicing for a bonspiel. Good coaching and good playing of course brought back prizes.

WHITNEY LAKE BEACH SITE TO BE IMPROVED. The I.C.W.U. Local 474 have held two dances thus far and plan on holding more in the near future. The proceeds of these dances go towards fixing the beach site at the lake. We would like to see this be a huge success as the beach really needs fixing, and who uses it more than we do? We wish Nick Elaschuk and the boys the very best of luck in their new endeavor.

CONGRATULATIONS TO THE FOLLOWING PROUD PARENTS:

Having babies seems hard on the "Papas" too. We are now waiting for Frank Reintjes to recover from an appendicitis operation. Methinks Hennie is waiting for him too as little Ingrid is a busy little girl when mama's feeding baby â Get well soon Frank. "Mama needs Papa". 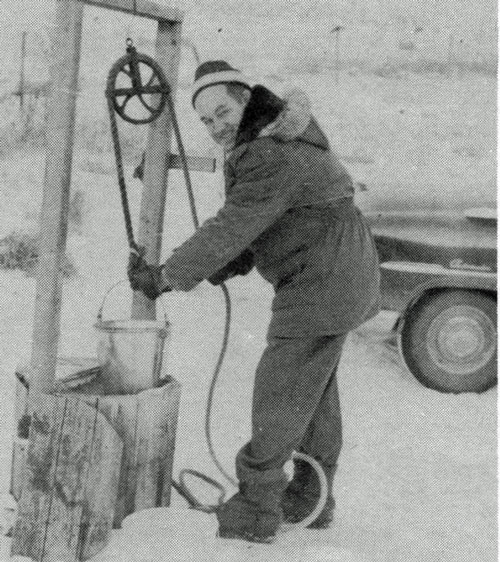 Curling competition has been tougher this year â a few beginners who were "easy" last year have given last year's tough rinks pullenty of competition. Some of these so-called Green Horns were in the running for the top four rinks. This of course made curling this year much more interesting, and of course resulted in much more enthusiasm. By the looks of things ( I can't tell but that's what I hear behind the glass) there should be some very good curlers around in a few years.

As every one else. I picked my rink. The Wyness rink with Alex, Janette, David and Butch â the latter three being fourteen and under, â I think deserve a lot of credit. These young fellows never failed to show up and when a player missed it was Alex. Janette skipped several games through the season with David playing third. The way these little fellows get out there and work is really good to watch. When it comes time to sweep â well there's no one out here that doesn't like to watch David sweep. On the Broom? Again that's David. This rink is a good rink to play against; you can't beat them 'till the last rock is thrown. 'Never give up' is their motto. Although they look a little sad when on the losing end, they're wonderful sports. When they're winning, don't look at the score board to see who's ahead, look at Butch and David's smiles.

The Round Robin finished up with:â

After the regular Round Robin was played off, there was still good ice so we started another Round Robin for Total Points. This prize went to the Wyness Rink.

Our ice is gone now, so that ends our curling. We've all had a good winter of curling, on the ice or behind the glass, which some of us are very good at. But to curl we have to have ice, and good ice we had. The credit for this goes to George Krissa and Alex Wyness who worked hard at keeping the ice in good condition, and near the end tried hard to make it last.

When curling, most of us work up a good appetite, and again our coffee bar did a good business. The ladies who so faithfully took their week-long turn at working in the bar deserve a lot of thanks.

When there is aroma of pies baking, soup and roasts cooking, over the townsite, and you see ladies dashing about, when the curling rink is all decked out in Red, White and Blue, last minute carpentry is underway, and yes â the last minute prize pick-ups, Yessum, that must be the day before the bonspiel.

We again had full house this year, 32 rinks in all. Our rink seems rather large to us, but when we get a full house like we did this year it seems pretty small. We're proud to say that our Spiel was a huge success. It being the only spiel of its kind in this area it is a big attraction as well as our good ice, rink and matched rocks, and last but not least, the Prizes, which as last year were exceptionally good. Prizes ranged from luggage, mixettes, end tables to wool Blankets. seat covers, steak knives, etc. etc. The prizes were beautifully displayed in the recreation room, all dressed up in Windsor colours.

With curlers and "Behind the Glass" curlers our rink was packed from morning till the last rock was thrown at night. This continuous stream of spectators and curlers lasted for five long, busy, fun-packed days.

The banquet was held on Saturday night, the second day of our Spiel, in the Recreation room. With approximately 130 guests, our recreation room was overcrowded, but managed to seat all. In order to accommodate such a crowd in a fairly small place, the ladies served a buffet dinner. And again we had a hot dinner with Roast of Beef, vegetables, a choice of pies etc. etc. etc., which was all most delicious. The ladies who very efficiently served the dinner were, Bea Williams, Irene Anderson, Maude Krissa and Vera Fakeley.

We are so fortunate to have such good cooks, as comments from a lot of "gentlemen" curlers were that "they came because they heard we had some wonderful cooks". With that, they promised to come again next year. It proves again that a way to a man's heart is through his stomach first, so, if we keep the cooks, we should have a good turn out again next year.

The ladies in charge of the booth during the bonspiel were, Irene Frisby and Margaret Lacrosse, who had to see that someone was there at all times, see that there was an ample supply of soup, etc., and also take their turn in the booth.

A lot of happy and tired curlers left on the last night, assuring us that they'd had a wonderful time and promised to come back next year.

The Bonspiel being the biggest event of the year for our club, makes us happy and-yes-a bit proud, that it turns out better each year. We are in hopes of many more years of Bigger and Better Bonspiels.

Thus we wind up curling for another year and "What a Grand Finis". 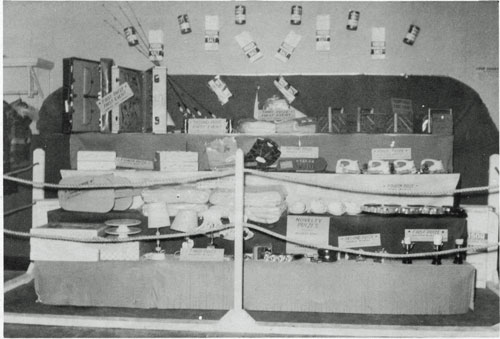 What a Bonspiel! What prizes! 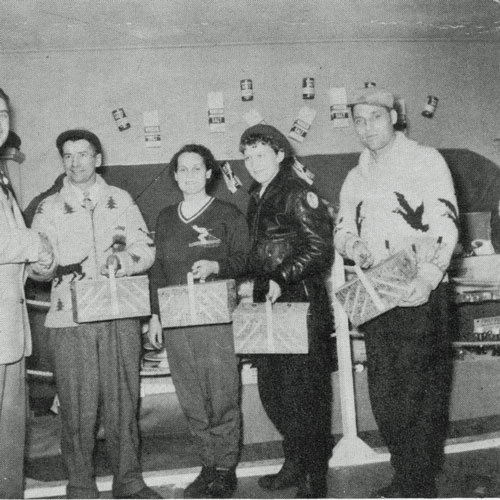 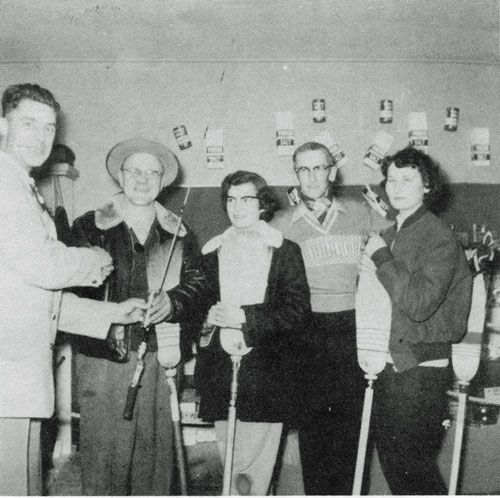 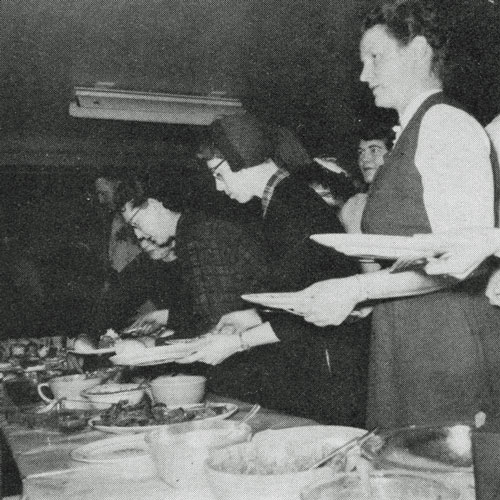 Ladies serving themselves at Banquet, only Lindburgher pictured
is Mrs. Ron Seal, front. 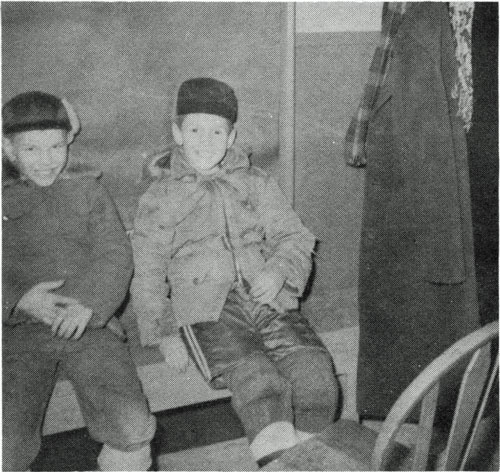 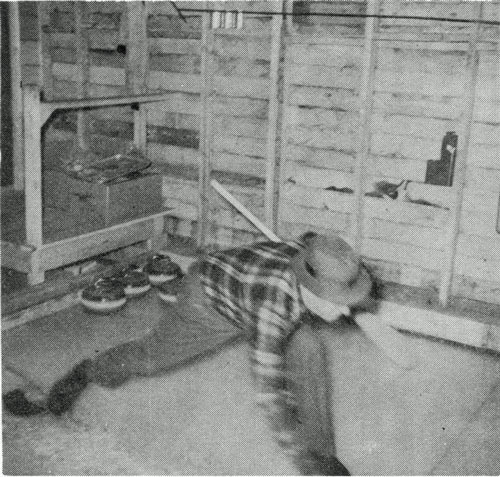 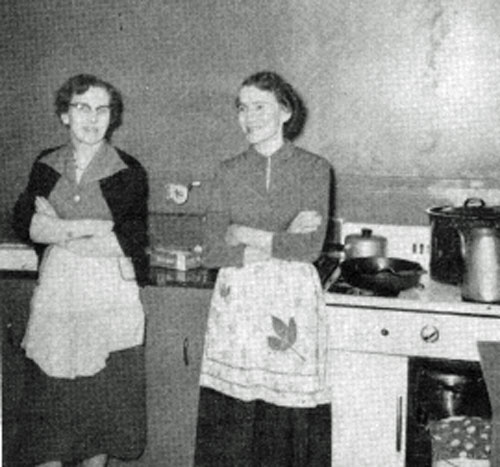 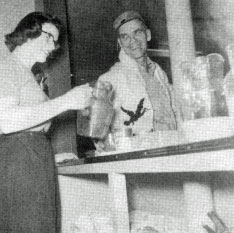 Florence Sutton serving Alex Wyness with Tomato Juice. By the
pleased look on Alex's face I'm not too sure it was juice. 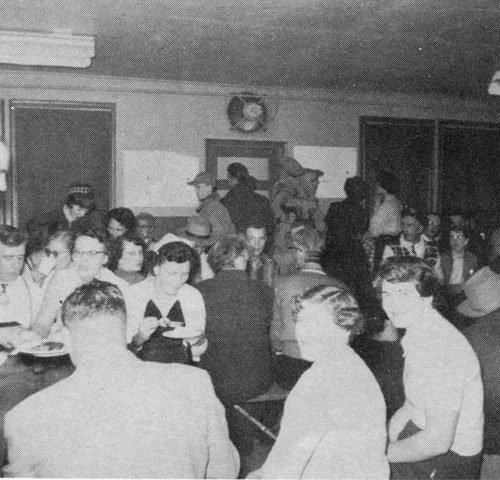 The contented looks come from the fellows with empty plates
at banquet. 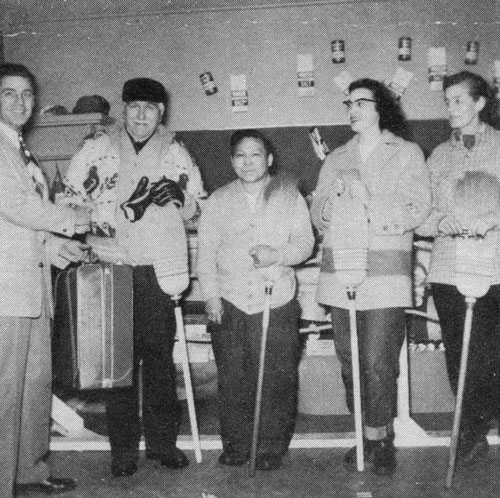 Jack Williams is shown presenting Dr. Miller with luggage donated by The Can. Salt Co. 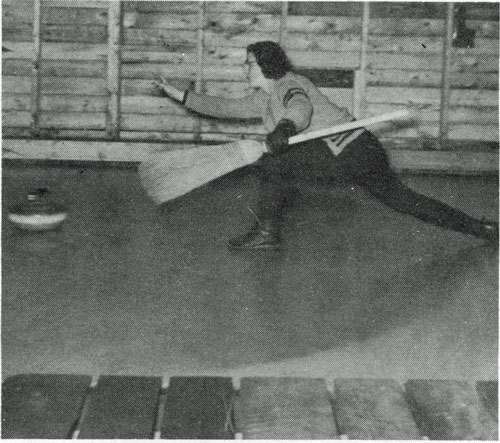 Florence Sutton throwing her first rock in the spiel 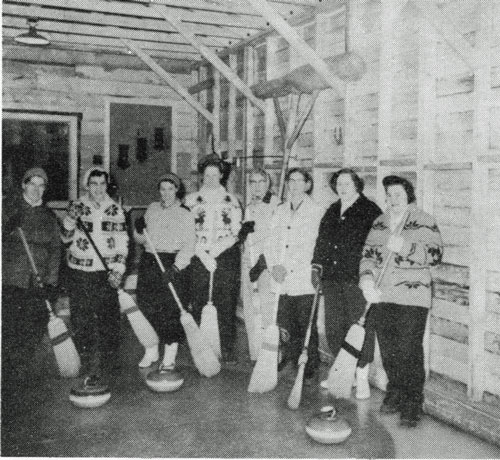 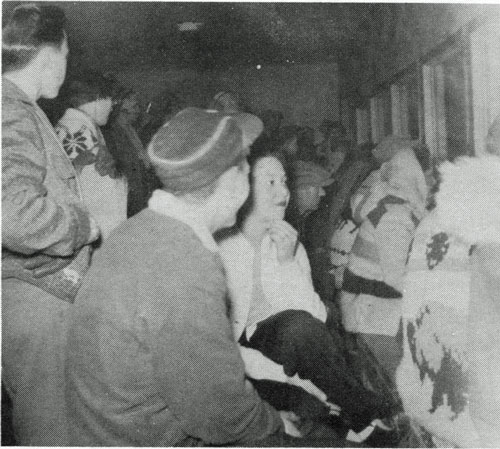 Pictured above are some of the many "Behind the glass curlers". 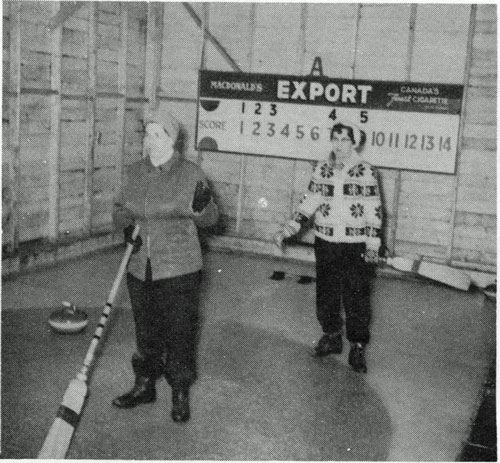