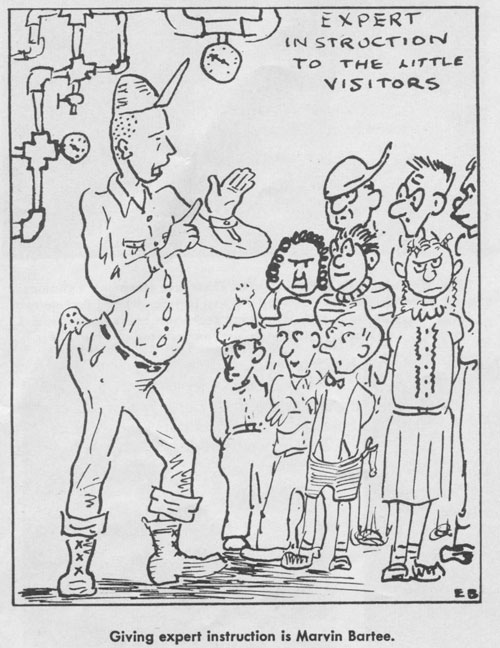 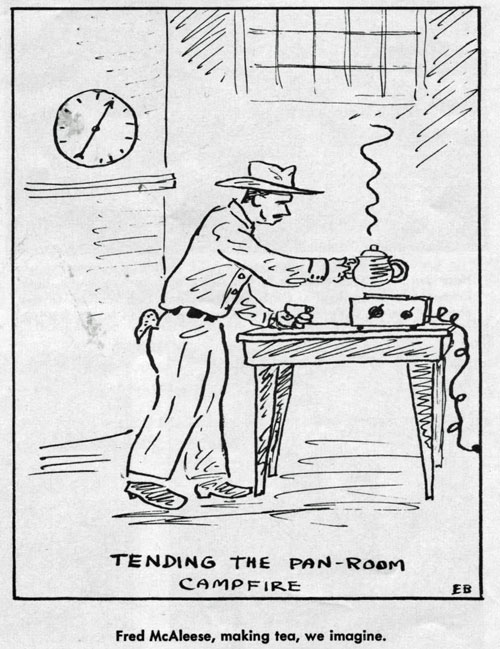 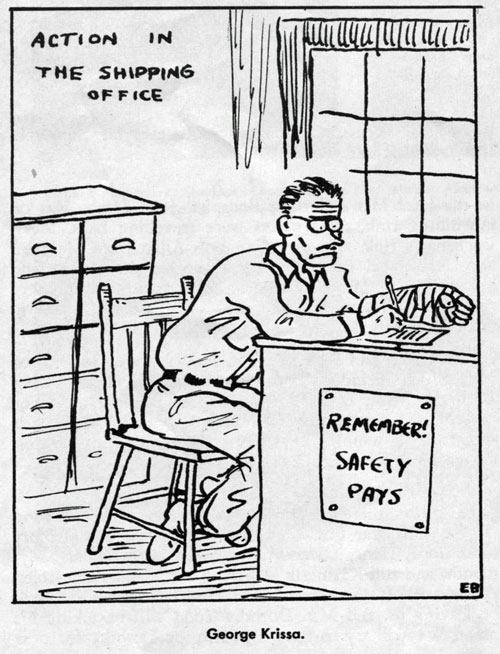 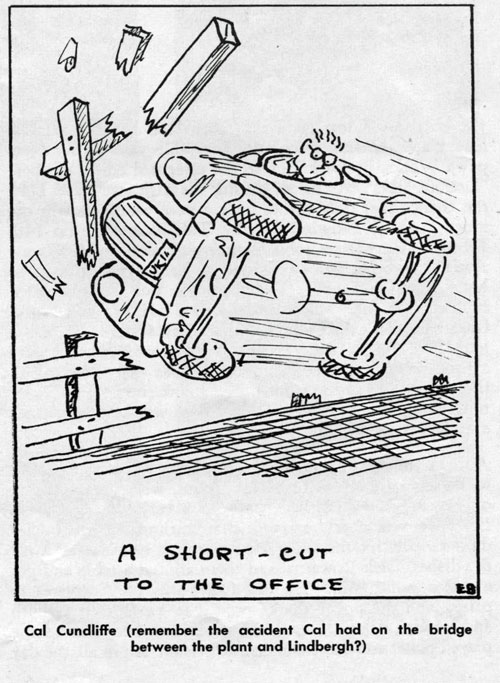 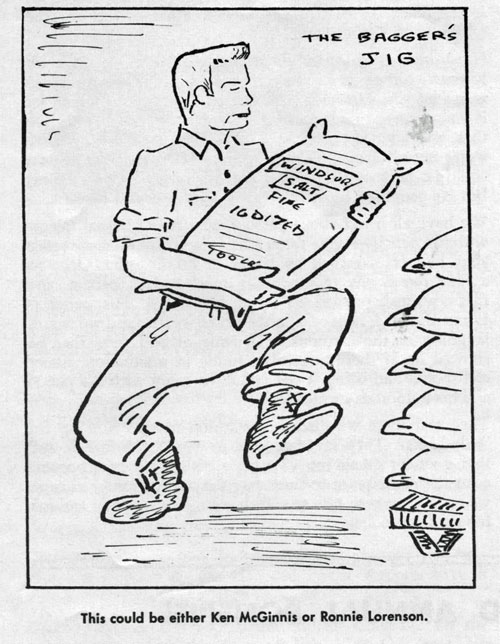 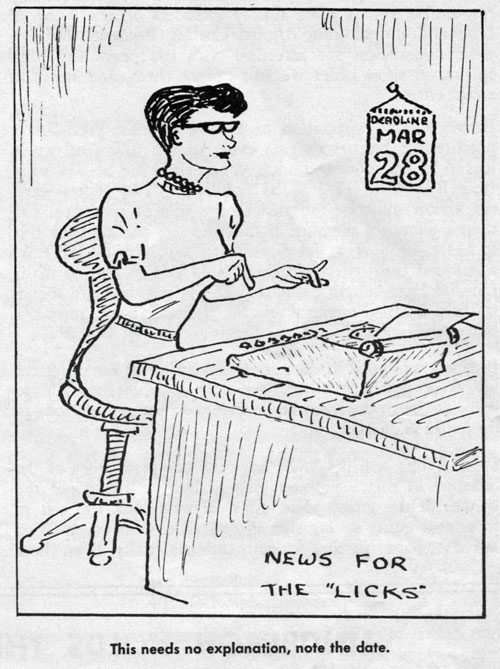 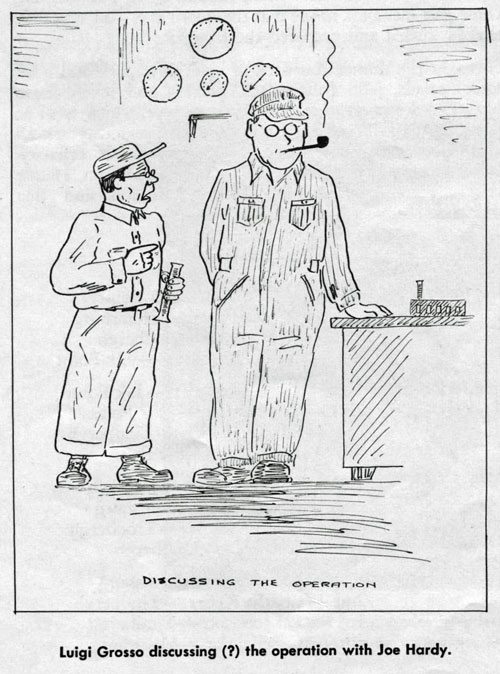 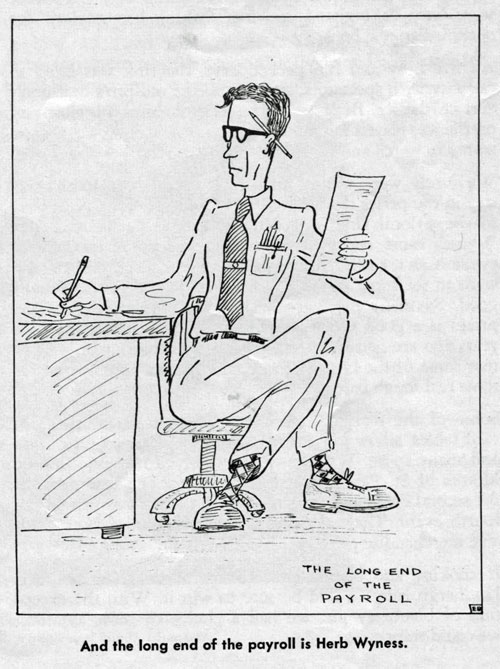 Enthusiasm ran high when Don Lumby and this writer came to Lindbergh on February 6th but we were in no way responsible â we were simply intruders on the scene of Lindbergh's week-long Annual Curling Bonspiel, but eligible nonetheless for infection with the prevailing high spirits. In short order we had caught them, and no mild attack either.

However, any expectation of getting in some preliminary practice for Neepawa's gala event of the following week, had to be abandoned at once. When rinks are booked solid from 8 A.M. to 12 P.M. as Lindbergh's two sheets were, the visitor must be resigned to the role of spectator, and there's plenty of pleasure in that and lots of Company too. It was again a very real pleasure to join with all the folks assembled from twenty miles around and to find so many familiar faces among them, though putting the right names to them is a real memory test. So, we made a few mistakes, but everybody was kind and forgiving and all was well.

Business was good at the coffee-bar, and after sampling the hot dogs, hamburgers, etc. the only sensible comment to make is that it deserved to be that way. Congratulations to the ladies in charge!

Susan Peters will no doubt have the complete story of the bonspiel in this issue, and then at last we'll find out the winner of the grand prize. Alex Wyness' rink was out in front and going strong during our visit, with every Good Windsor Salter pulling for him enthusiastically. Even those whom duty kept at work during his games were kept informed, end by end, of his progress via telephone. We sat in the office for part of one of Alex's games and saw the system work. Good show!

Herewith a warning to all on reducing diets â don't try to practice them at Lindbergh Staff House. Irene Anderson won't let you. However, you can really enjoy not being let if you prepare in advance by starving a couple of days. Do that, and your net gain in 24 hours of Irene's hospitality won't exceed a couple of pounds, â anyway, mine didn't, could be because we didn't have "blanberry" pie this time. But it's promised for next year â positively and for sure.

We have all heard about persons who have unusual talents with the pencil â give them a half chance and bang! there's your likeness sketched on paper in nothing flat. Once in a blue moon one may actually meet such a person, and that's what happened to us at Lindbergh. His name is Elmer Bjorstad, he works in the power-house, and we're still laughing at the cartoons of friends in odd fixes that he showed us. If there's anything funny in a situation, Elmer can spot it and bring it out for all to enjoy with his pencil and his humorous captions.

Then and there we made a resolution to sign him up for "Salt Licks". They say that gold is where you find it and that goes for talent too. We hope that Elmer will become a regular contributor to these pages from now on â though we have had to ask him to switch from pencil to pen and ink for good reproduction.

A few days before the bonspiel, the ladies of the townsite were busy baking and cooking, making preparations for our third annual bonspiel.

All five busy and fun packed days, the rink was filled to capacity with spectators, curlers and the old pro's that don't curl on the ice. Both types of curlers, behind the glass and on the ice, played some real close games, making them good games to watch and listen to.

We surely were pleased to see so many more local rinks stay in the prizes this year than have done before. Next year maybe a local rink will win the Grand Challenge. Alex Wyness came real close this year, won third in the first event. Can't really blame us for being a bit selfish and want to see some prizes stay here, as they are exceptionally good. So many more of our local curlers staying in the prizes is a good sign that most of our beginners of three years ago are getting pretty professional. Next year we feel that some of the better outside rinks better be prepared for some real tough battles.

Some of the many prizes were, Tri-lights, hostess chairs, card tables, silver ware, shirts, sweaters, thermos jugs, trays and many more. We had trophies for two events. Conroy Motors of St. Paul donated a trophy for the first prize in the second event and the supervisors' trophy was first in the fourth event. These trophies were accompanied by a valuable merchandise prize.

If cooking and baking prizes were to be given out, the Lindbergh ladies would be sure to win it. With the exception of blanberry pie, we had a choice of most anything we could want to eat.

We don't know how Irene and Maude do it, but they do. These gals managed to see that the booth was well supplied, worked, curled and prepared the banquet.

This year the dinner consisted of cold roast pork and beef, potato salads, jello fruit salads, pickles, and lovely fresh buns. For desert there was a choice of pies, which were as delicious as they looked. And again as in previous years, all bonspielers went home tired, happy and filled to capacity. Ladies serving at the banquet were, Irene Anderson, Maude Krissa, Florence Lorenson, Rohda Lorenson and Bea Williams.

The following are the much envied winners:

George Krissa had the misfortune of breaking his arm on the car puller. However, the "one armed bandit" (new name he has acquired) was back at work before he was due to be presented to the firing squad. We're glad to have you back, George. Hope your fingers loosen up soon.

Congratulations to Bob Lorenson (Maintenance) for winning the election on the Hospital Board. Reports have it that Bob commanded a large majority.

And congratulations to Cal and Eileen Cundliffe on the birth of their third daughter, on Feb. 17th. Cal says, "NO boys, please."

Congratulations to Ojibway Mine for completing their first safety objective. We at Lindbergh wish you lots of luck for many more.

We wish to extend our deepest sympathy to Bill and Irene Anderson and their family on the recent death of Bill's mother.

In previous years at this time our ice was gone, and all we had left of curling was memories, plus a few trophies and prizes here and there. This year, our ice is still as good as ever, and most curlers are as enthusiastic now as at the beginning of the season. The Bonspiel and Round Robin being over, the battle is now on for the highest average score. And a battle it is. In the early stages of this playoff, Alex Wyness was well in the lead, but Fred Frisby is now leading, with Bob Lorenson close behind, leaving Alex in 3rd place. I wouldn't dare make a guess at the final winner, as these three rinks are pretty well matched.

The playoffs for the Round Robin proved interesting. Some real tough games were battled out. First and second places were won without playing off â third and fourth had four teams tied for each position. I still think Bob Lorenson should have won 3rd prize because I had my money on him, but he didn't, and the winners are:

Again this year, all the lady curlers and ladies of curlers are to be commended on their good work in the booth.

What's the good of curling if you can't finish the season with a party? And that's just what we did on the evening of Mar. 15 ( and A.M. of Mar. 16). The curling rink recreation room was the scene of a lively and well-attended party to wind up the season. 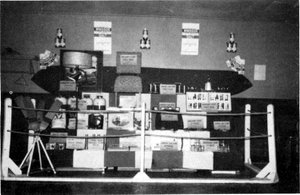 This is the display of prizes. This display was nicely set up by, Arlene Wyness, Henrietta Keck, Edith Hodge and Sheila Lorenson. 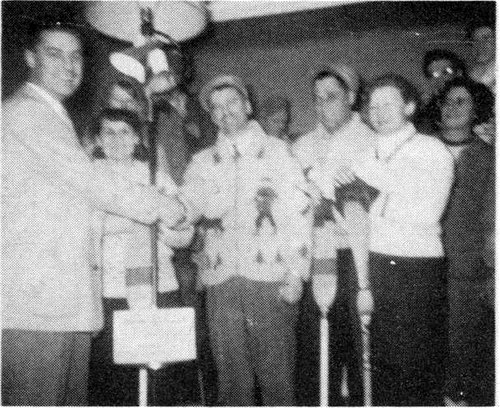 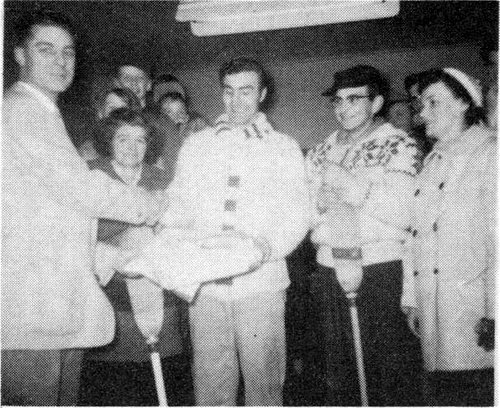 1. Second in the second, are Mr. and Mrs. Tom Lambie and Mr. and Mrs. Derda all of Elk Point, receiving sheets and pillow slips.

2. Third in the second, are Mr. and Mrs. Fred Frisby Sr. and Alice Young receiving silver sets. Missing from picture is

Margaret McGinnis and Joe Mah. These lucky winners got the Conroy Trophy and hostess chairs.

2. These are the charming young ladies who served at the banquet. From left they are, Bea Williams, Irene Anderson, Florence 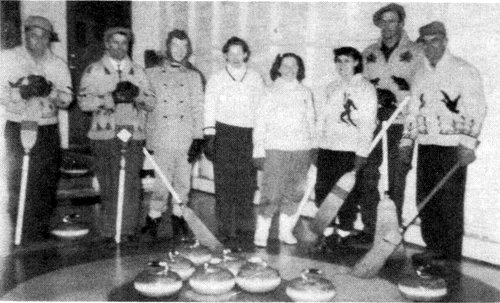 Here's a real house, note the two white handled rocks in center.
These are Alex's rocks, cutting out six of Peters. From left to right
are: Johnny Rosinchuk, Peter Yewchin, Jeanette Wyness, Evelyn
Solden, Olive Nelson, Irma Yewchin, Carl Nelson and Alex
Wyness. 'Twos a friendly game, as they're all smiling and the
rinks are mixed. Alex's curlers are, Jeanette and Olive and
Carl Nelson. 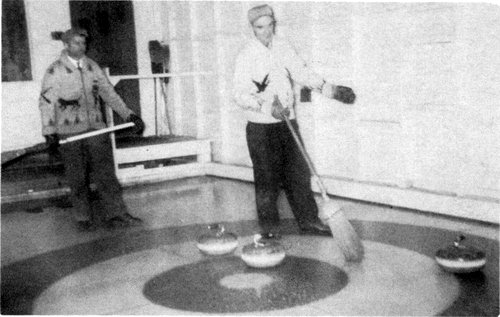 Alex Wyness calling for an out turn, Peter Yewchin wondering
if those two rocks of his are going to stay there.

The card tables are third prize in first event. 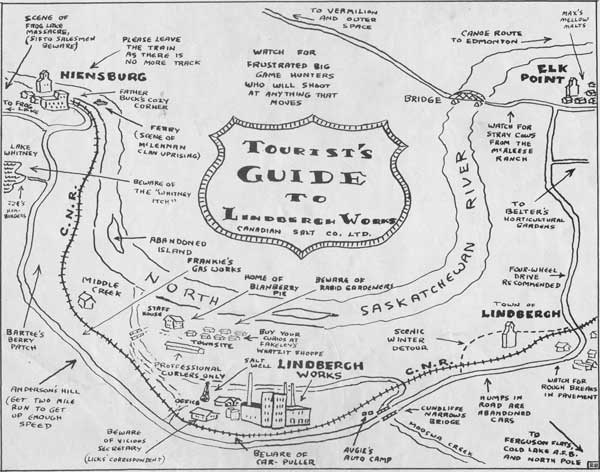